Earlier this month, Turkey expelled Israel’s ambassador and other senior diplomats after the release of a United Nations report on Israel’s attack on the Gaza-bound aid flotilla in 2010. The report accused Israel of “excessive and unreasonable force” in its attacks on the Gaza aid ship, Mavi Marmara, which killed nine people. But it also called on Israel to issue a statement of regret and compensate the families of the dead, as well as the wounded passengers. The Israeli prime minister, Benjamin Netanyahu, refused to apologize. We talk to MIT Professor Emeritus Noam Chomsky about the relationship between Turkey and Egypt, long key allies for Israel, and how the deterioration of their relations “contributes very substantially to Israel’s isolation in the region.” [includes rush transcript]

AARON MATÉ: Noam, I wanted to ask you about this crisis unfolding with Turkey and Israel. Earlier this month, Turkey expelled Israel’s ambassador and other senior diplomats after the release of a U.N. report on Israel’s attack on the Gaza-bound aid flotilla in 2010. The report accused Israel of, quote, “excessive and unreasonable force” in its attacks on the Mavi Marmara, which killed nine people. But it also called on Israel to issue a statement of regret and compensate the families of the dead, as well as the wounded passengers. The Israeli prime minister, Benjamin Netanyahu, refused to apologize. He wants improved relations with Turkey. And this is what he said.

PRIME MINISTER BENJAMIN NETANYAHU: [translated] In the past few days, we have witnessed a deepening of tensions with Turkey. It was not our choice, and it is not our choice today. We respect the Turkish people and its heritage, and we certainly want to improve ties.

AARON MATÉ: Noam Chomsky, what does this spat over the flotilla mean for Israel and Turkey and for the region?

NOAM CHOMSKY: I should say on the side that I didn’t think much of that U.N. report, for all kind of reasons, but let’s skip that.

Turkey is the—has been the closest and, in fact, oldest regional ally of Israel. The close Turkish-Israeli relations go back to the late 1950s—military intelligence, commercial, more recently, tourism and cultural relations. That’s their one significant regional ally. And, of course, it’s the major regional power. For them to have—to break—if those relations significantly deteriorate, that contributes very substantially to Israel’s isolation in the region.

Now, at the same time—the same thing is happening in Egypt. One of the reasons why the U.S. and its allies are so concerned about, and in fact so antagonistic to, democracy in Egypt—and, in fact, anywhere in the Arab world—is that if you have moves towards democracy, popular opinion is going to have some effect on policy. In fact, that’s the basic measure of whether there’s any functional democracy. Well, public opinion in Egypt is very antagonistic to the way the dictatorship, Mubarak dictatorship, interpreted relations with Israel. Very antagonistic. There was a peace treaty in 1979, and it was interpreted in Israel right away, and in the United States, as essentially licensing Israel to expand its criminal activities in the Occupied Territories and to attack its northern neighbor, Lebanon, which is exactly what it did. The reasoning, which was pretty clearly expressed, is that with Egypt neutralized—that’s the one major deterrent to Israeli actions—and if they’re neutralized, if there’s a peace treaty they pull out of it, then Israel is free to go ahead to do what it wants in the Occupied Territories and attacking Lebanon. Notice that’s exactly what happened. Now that’s—they’re very—and it’s continued that way. And there’s plenty of bitterness in Egypt about this.

There’s also—the Egyptian opinion, public opinion, like throughout the Arab world, regards the United States and Israel as the major threats they face. In [Egypt], latest polls, about 90 percent. And they don’t regard Iran as a threat. Maybe 10 percent in the Arab world, major polls about a year ago, regard Iran as a threat. In fact, opposition to U.S. policy is so strong that throughout the Arab world, a majority—in Egypt, it’s 80 percent—think the region would be more secure if Iran had nuclear weapons. Well, you know, that’s not the kind of policy that the United States and Israel want to see implemented, needless to say, hence a strong opposition to the rise of any meaningful democracy.

But even—and there have been successes in Egypt of the popular movements, the labor movement and others. Labor, for the first—which is a core part of the uprising, goes back many years, is now organizing freely, is beginning to form independent unions and so on. Other parts of the population are. The press is much freer. There are some real achievements, despite the fact that the military regime is still in place. And they show up in policy. As public opinion becomes somewhat more influential in policy formation, you see the effect. The attack on the Israeli embassy a couple of days ago was a kind of a dramatic element of it. Israeli-Egyptian relations now are quite tense. Next to Turkey, Egypt is the most important regional country for Israel.

But it’s beyond that. A couple of months ago, the Egyptian government, for the first time in 30 years, permitted Iranian ships to transit the Suez Canal into the Mediterranean. That may have included submarines. Not clear. Israel—they’re moving towards exchanging ambassadors, Egypt and Iran. Egypt somewhat relaxed the entry, the Gaza-Egypt border, the Rafah border—limited, but something. That undermines, to some extent, the U.S.-backed Israeli siege on Gaza. Egypt moved to help expedite some degree of reconciliation between Hamas and Fatah, the two—you know, the major Palestinian factions that dominate, respectively, Gaza and the West Bank. That also carries forward—that kind of unity is essential if the Palestinians are going to make significant moves towards some degree of independence—statehood, whatever form it takes.

Well, all of these moves by Egypt are regarded very negatively by the U.S. and Israel. And that relation between—well, as you know, the Israeli ambassador had to be flown out on a military jet a couple days ago with the whole staff. So, on the one hand, relations with Turkey are deteriorating; on the other hand, the relations with Egypt are deteriorating — “relations” in the sense in which they had existed as a license for Israeli military action and occupation. And that is leading in Israel to a rather significant reassessment of where they should go.

This is coming even from the right wing. Just a couple days ago, Dov Weissglas, close to Sharon, very right-wing politician, urged Israel to—Israeli leadership to reassess their policies towards Palestinians, towards statehood. There was a very important meeting about two or three months ago—

AMY GOODMAN: Noam, we have to end in just two minutes, so we just—

Noam Chomsky: 2012 GOP Candidates Views are “Off the International Spectrum of Sane Behavior”

NEXTNoam Chomsky: 2012 GOP Candidates Views are “Off the International Spectrum of Sane Behavior” 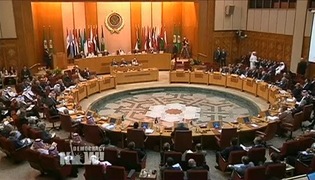