Wikipedia, the online encyclopedia and sixth most visited site in the world, will join websites like the content aggregator Reddit to “go dark” on Wednesday in opposition to the Stop Online Piracy Act (SOPA) and its companion bill, the Protect IP Act (PIPA), which are currently being debated in Congress. “What these bills propose are new powers for the government and also for private actors to create, effectively, blacklists of sites that allegedly are engaging in some form of online infringement and then force service providers to block access to those sites,” says Corynne McSherry, intellectual property director at the Electronic Frontier Foundation. “What we would have is a situation where the government and private actors could censor the net.” Chief technology officials in the Obama administration have expressed concern about any “legislation that…undermines the dynamic, innovative global Internet.” But the bills’ main backers—Hollywood movie studios and music publishers—want to stop the theft of their creative content, and the bills have widespread bipartisan support. A vote on SOPA is on hold in the House now, as the Senate is still scheduled vote on PIPA next Tuesday. [includes rush transcript]

AMY GOODMAN: If you want to know more about two controversial internet anti-piracy bills moving through Congress, you won’t be able to consult Wikipedia on Wednesday. The online encyclopedia and sixth most visited site in the world will join websites like the content aggregator Reddit to “go dark” for 12 to 24 hours in opposition to the Stop Online Piracy, or SOPA, Act and its companion bill, the Protect IP Act. Wikipedia co-founder Jimmy Wales announced the decision to bring down his website last night on Twitter, writing, quote, “Student warning! Do your homework early. Wikipedia protesting bad law on Wednesday!”

The White House responded over the weekend to two petitions opposing the bills. The administration’s chief technology officials wrote on White House blog Saturday, quote, “We will not support legislation that reduces freedom of expression, increases cybersecurity risk, or undermines the dynamic, innovative global Internet.”

While the White House did not take a definite position on SOPA and the Protect IP Act, it has called for legislation to combat online piracy that has hurt the legislation’s main backers: Hollywood movie studios and music publishers who want to stop the theft of their creative content. Now a vote on SOPA is on hold in the House. The Senate is still scheduled to vote on the piracy issue next Tuesday, a week from today.

Well, to talk more about the Stop Online Piracy Act, or SOPA, and the Protect IP Act, we go to San Francisco to talk Corynne McSherry, who is the intellectual property director at the Electronic Frontier Foundation.

We welcome you to Democracy Now! Please explain both of these bills. It’s very tough, I think, for most people to understand the technical aspects of this legislation.

CORYNNE McSHERRY: Sure. In a nutshell, what these bills propose are new powers for the government and also for private actors to create, effectively, blacklists of sites that allegedly are engaging in some form of online infringement and then force service providers to block access to those sites. And that’s why we call these the censorship bills, because effectively what we would have is a situation where the government and private actors could censor the net. So, U.S. citizens would basically get a different version of the internet, different from what you might get in, say, Italy or even China.

AMY GOODMAN: So, explain the difference between SOPA and the Protect IP Act.

CORYNNE McSHERRY: Well, currently they’re quite—they’re quite similar. As drafted, SOPA was much broader than the Protect IP Act, and the folks behind the bill realized that maybe it was a little bit too broad, so they tailored it down. So now they’re quite similar. One of the differences is that SOPA is, finally, after a great deal of activism, more or less on hold for now. But Senator Reid is saying that he’s going to push forward the Protect IP Act, despite all of the opposition.

AMY GOODMAN: And explain who is behind these two acts.

CORYNNE McSHERRY: Well, that’s not a great mystery. Both of these acts are clearly being pushed hard by the big media industries, who seem to think that online piracy is why they’re having trouble, and actually, who insist that they’re having all kinds of trouble and they’re failing immediately if something doesn’t—if legislation isn’t passed immediately, they’re going to all go under, which is not true. In fact, the motion picture industry has been posting record profits for five years straight.

AMY GOODMAN: In a December hearing of the House Judiciary Committee, Congress Member Jason Chaffetz, a Republican from Utah, talked about the lack of expert consultation in drafting SOPA.

REP. JASON CHAFFETZ: I was trying to think of a way to try to describe my concerns with this bill, but basically, we’re going to create—we’re going to do surgery on the internet, and we haven’t had a doctor in the room tell us how we’re going to change these organs. We’re basically going to reconfigure the internet and how it’s going to work, without bringing in the nerds, without bringing in the doctors. And again, I worry that we did not take the time to have a hearing to truly understand what it is we’re doing. And to my colleagues, I would say, if you don’t know what DNSSEC is, you don’t know what you’re doing. And so, my concern is that there is a problem, but this is not necessarily the right remedy.

CORYNNE McSHERRY: I think he’s absolutely right. SOPA, in particular, was negotiated without any consultation with the technology sector. They were specifically excluded. And one of the things I think is really exciting, though, is that—you know, no one asked the internet—well, the internet is speaking now. And so, we’re seeing all kinds of opposition all over the web. And there’s going to be a day of action tomorrow. People are really rising up and saying, “Don’t interfere with basic internet infrastructure. We won’t stand for it.”

AMY GOODMAN: What do you make of President Obama’s position on the bill, Corynne?

CORYNNE McSHERRY: Well, it was heartening to see the White House statement and see the White House sort of stand with the internet and stand with its own commitments against censorship and against online censorship, in particular. Up until recently, we have been very concerned that there seemed to be a contradiction. On the one hand, you had Hillary Clinton criticizing foreign governments for online censorship and for censoring web results and so on. But at the same time, you had these bills rocketing through Congress that would propose very similar things. So, it was good to see the White House stand against that and criticize these bills. On the other hand, I am concerned that the White House seems to think that some kind of legislation needs to be passed this year. And I actually don’t think the case has been made for that.

AMY GOODMAN: Talk about the whole issue of the protection of artists, for example, the music industry and their concerns.

CORYNNE McSHERRY: Well, look, there’s no question that there’s plenty of infringement online. That’s been true for a long time now. The question is how you’re going to answer it. And the best way to respond—it’s very clear at this point. The best way to respond to online infringement is to give people a better alternative. And when that happens, people go to that. So that’s the best way to do it. It’s not to pretend that the Pirate Bay doesn’t exist; it’s to give people an alternative to the Pirate Bay. And one of the things that we’ve seen is that, actually, independent artists are taking advantage of new technologies to reach the—reach new audiences. Music fans have more access to more music than they ever had before, and different kinds of music. And that’s what happens when you take advantage of new technologies, as opposed to running away from it.

AMY GOODMAN: Let me read you a tweet that Murdoch sent out this weekend: “So Obama has thrown in his lot with Silicon Valley paymasters who threaten all software creators with piracy, plain thievery.”

CORYNNE McSHERRY: Well, you know, I think it’s ironic to talk about paymasters, given the amount of money that Hollywood has been spending in Congress to try to ram these bills through. I think it is true that the Obama administration has somewhat stood with Silicon Valley here, but I think Silicon Valley knows how to protect itself against so-called software piracy better than Rupert Murdoch will.

AMY GOODMAN: Finally, the votes, where they stand this week?

CORYNNE McSHERRY: Well, what we’re seeing now is Harry Reid, Senator Reid, is insisting that he’s going to go forward with a vote next Tuesday on the Protect IP Act. We’ll see what happens over the course of the week. Things have changed a lot. And after the day of action tomorrow, a lot of us are hopeful that Senator Reid will think better of trying to push this bill through, given the level of opposition. It’s really just a bad idea, particularly when you think about what they’re doing here. This is basic internet infrastructure that they’re messing with. And I think that Representative Chaffetz had it exactly right. It’s foolish to go in and interfere with internet infrastructure when you don’t know what you’re doing.

AMY GOODMAN: And overall, SOPA and PIPA, how they’ve been separated?

CORYNNE McSHERRY: Well, SOPA seems to be on hold for now. If PIPA is rammed through, it may be that in the House of Representatives they will try to revive SOPA and sort of bring the two bills in line. I certainly hope not, because that would be very, very dangerous for human rights, for internet security, and send an extremely negative signal around the world that the United States government does in fact support censorship, as long as you say that you’re doing it in the name of intellectual property enforcement.

AMY GOODMAN: Corynne McSherry, I want to thank you for being with us, intellectual property director at the Electronic Frontier Foundation. When we come back, we’ll be joined by author Rebecca MacKinnon. She has just written the book, Consent of the Networked: The Worldwide Struggle for Internet Freedom. This is Democracy Now! Back in a minute.

“Internet Censorship Affects Everybody”: Rebecca MacKinnon on the Global Struggle for Online Freedom

NEXT“Internet Censorship Affects Everybody”: Rebecca MacKinnon on the Global Struggle for Online Freedom 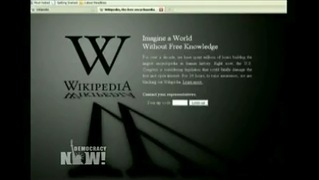