Republican presidential candidates gathered in Charleston, South Carolina, Thursday night for their final debate before Saturday’s primary. The debate capped a busy day that saw the departure of Texas Gov. Rick Perry, Rick Santorum’s defeat of Mitt Romney in the Iowa caucus recount, and new details of Newt Gingrich’s infidelities during his second marriage. We air clips from the debate and speak to Kevin Alexander Gray, a civil rights activist and community organizer in South Carolina, and Wayne Slater, a senior political writer at the Dallas Morning News and author of “Bush’s Brain: How Karl Rove Made George W. Bush Presidential.” [includes rush transcript]

JUAN GONZALEZ: We begin today’s show in South Carolina, where Republican candidates have entered their final full day of campaigning before tomorrow’s primary, the first vote in the South.

On Thursday, a number of major developments shook the presidential race. Texas Governor Rick Perry dropped out and endorsed former House Speaker Newt Gingrich. Republican officials in Iowa acknowledged Rick Santorum had actually won the Iowa caucus, beating Mitt Romney by 34 votes. And Newt Gingrich’s ex-wife told ABC News that Gingrich had sought an “open marriage” in the 1990s while having an affair with a staffer who later became his third wife.

And finally, the four remaining leading Republican candidates—Romney, Santorum, Gingrich and Ron Paul—met in Charleston, South Carolina, for the 17th debate of the campaign. Moderated by CNN’s John King, the debate began like this.

JOHN KING: And just as Speaker Gingrich surged into contention here in South Carolina, a direct, fresh character attack on the Speaker. And Mr Speaker, I want to start with that this evening. As you know, your ex-wife gave an interview to ABC News and another interview with the Washington Post, and this story has now gone viral on the internet. In it, she says that you came to her in 1999, at a time when you were having an affair. She says you asked her, sir, to enter into an open marriage. Would you like to take some time to respond to that?

NEWT GINGRICH: No, but I will.

I think—I think the destructive, vicious, negative nature of much of the news media makes it harder to govern this country, harder to attract decent people to run for public office. And I am appalled that you would begin a presidential debate on a topic like that. […]

Let me be quite clear. Let me be quite clear. The story is false. Every personal friend I have who knew us in that period says the story was false. We offered several of them to ABC to prove it was false. They weren’t interested, because they would like to attack any Republican. They’re attacking the governor. They’re attacking me. I’m sure they’ll presently get around to Senator Santorum and Congressman Paul. I am tired of the elite media protecting Barack Obama by attacking Republicans.

AMY GOODMAN: Later in the debate, former Massachusetts Governor Mitt Romney accused President Obama of being a crony capitalist, in part due to his decision Wednesday to reject the Keystone XL tar sands pipeline.

MITT ROMNEY: I’d like to talk about something else that President Obama has been doing. He’s been practicing crony capitalism. And if you want to get America going again, you’ve got to stop the spread of crony capitalism. He gives General Motors to the UAW. He takes $500 million and sticks it into Solyndra. He stacks the labor stooges on the NLRB so they can say no to Boeing and take care of their friends in the labor movement. You go across the country, with regards to energy, because he has to bow to the most extreme members of the environmental movement. He turns down the Keystone pipeline, which would bring energy and jobs to America. This president is the biggest impediment to job growth in this country, and we have to replace Barack Obama to get America working again.

AMY GOODMAN: We will air more from last night’s debate in a moment, but first we’re joined by two guests. Joining us from Charleston, South Carolina, is Wayne Slater, senior political writer at the Dallas Morning News. He has been closely following the Republican race, attended last night’s debate, co-author of three books, including Bush’s Brain: How Karl Rove Made George W. Bush Presidential.

We are also joined by Kevin Alexander Gray, longtime civil rights activist, community organizer in Columbia, South Carolina. He is author of Waiting for Lightning to Strike: The Fundamentals of Black Politics. He’s joining us from the studio of ETV, South Carolina’s public broadcasting.

Wayne Slater, you’re in Charleston. The debate was there last night. You were there. Talk about the highlights. What do you think is most important?

WAYNE SLATER: Well, I think you really pointed out a couple of the highlights in the setup piece. You know, nobody, especially in a conservative Republican primary in a conservative state like South Carolina, is going to lose any votes by attacking the news media. That’s what Gingrich did. It also allowed him to avoid the answer to the question, which is a significant piece of political baggage.

But even more important, I think, was the way he did it. Earlier this week in Myrtle Beach at the first Republican debate in South Carolina, Gingrich talked about being a tough guy. During a campaign town hall meeting, a voter asked him, “Do you think—can you bloody Barack Obama’s nose?” And Gingrich said, “I’m not going to bloody his nose, I’m going to knock him out.” This is the bully boy. And one of the things, I think, that has emerged is, because of voter anxiety, concern, hatred of the President, what the Republicans, at least a significant faction, seem to want is a bully boy. And Gingrich is emerging as exactly the character or the caricature that many of those voters are looking for.

JUAN GONZALEZ: And Wayne Slater, what do you make of Rick Perry’s dropping out? You are very familiar with him and his trajectory in Texas. There was great hope among some Republicans for him early in the race. Who does it help, and what is the impact of his dropping out? First of all, we want to play this clip of him announcing his dropping out of the presidential race.

GOV. RICK PERRY: I’ve always believed the mission is greater than the man. As I have contemplated the future of this campaign, I have come to the conclusion that there is no viable path forward for me in this 2012 campaign. Therefore, today, I am suspending my campaign and endorsing Newt Gingrich for president of the United States. I believe Newt is a conservative visionary who can transform our country. We’ve had our differences, which campaigns will inevitably have, and Newt is not perfect, but who among us is?

WAYNE SLATER: Well, look, the handwriting had been on the wall for a while for Rick Perry. A couple of disastrous debate performances really killed off any hope of his campaign. I talked to voters in Iowa, in New Hampshire and here in South Carolina. These are people who were predisposed, Republican conservative voters, predisposed to like Rick Perry, and they didn’t dislike him, but they clearly didn’t think he was ready for the job. It’s like that redneck comedian Ron White’s line, “You can’t fix stupid.” And Republican voters, even some people who liked Rick Perry, thought he simply wasn’t intellectually ready.

Now, I think what happened when he dropped out was, obviously, the first thing was to help Newt Gingrich, provide some momentum. Gingrich didn’t get many votes, I think, from Perry, because Perry didn’t have many votes here in South Carolina. But I think it clearly does sharpen this division within the Republican Party between the establishment wing and the social conservative Tea Party wing, who want anybody but Romney.

I do think, one last thing, that the big winner of Perry dropping out might have been Barack Obama, because the sooner that we get to a state where someone like Newt Gingrich can be in contention for the Republican nomination, I think it is something that the White House would be very, very happy to see.

That being said, we come forward to Strom Thurmond and the Dixiecrat party, to the Southern strategy with Richard Nixon, which was led by Harry Dent from South Carolina, who was head of RNC, to Lee Atwater, who worked George—the first George Bush and developed racial politics in the Southern strategy even further. So we’re used to this idea of race politics and ethnic politics being played in this state. Ethnic politics were even played against the current governor by both parties. And even when the Democrats come here, Democrats come here to get their black ticket punched. Republicans come here to punch black people. We knew that, saw that coming with the comments that Santorum made about black people in Iowa. We see that with the comments that Newt Gingrich makes about President Obama being “the food stamp president.” Although unemployment in the black community has risen under Obama, there’s not a likelihood that black voters are going to vote for Newt Gingrich. So, it’s—obviously, this idea of Obama being “the food stamp president” and Santorum talking about black people’s moralities in an oblique kind of way, everybody is used to that. And Democrats and Republicans play that. That’s the nature of this state, that we call it, not to be indelicate, “kick-a-nigger politics.”

And, of course, it’s going to arouse a certain segment of the Republican Party behind Newt Gingrich. I think Newt Gingrich is the beneficiary of Perry dropping out, and it pretty much coalesces that whole idea of the Southern nativism and the Southern strategy that we’ve become accustomed to in American politics and Southern politics.

AMY GOODMAN: We’re going to break and then come back to this discussion. We’re in Columbia and Charleston, South Carolina. Charleston is where the 17th Republican presidential debate took place last night, with one fewer candidate, because Rick Perry, the Texas governor, has dropped out, throwing his support to Newt Gingrich, who’s surging in the polls in South Carolina ahead of—ahead of Romney, who also yesterday suffered a major defeat in the recount of the Iowa caucus vote with the announcement that, in fact, it was Rick Santorum, the former Pennsylvania senator, who had won. This is Democracy Now! democracynow.org, The War and Peace Report. Back with Wayne Slater and Kevin Alexander Gray in a minute. 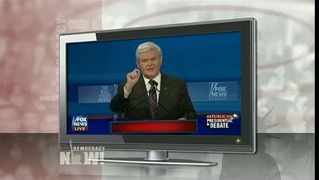