Syrian Activist Speaks from Hiding: The Bloodshed is Continuing Despite International Criticism

Street battles are raging at the gates of the Syrian capital of Damascus, and activists say at least 62 people were killed nationwide on Sunday. This comes as United Nations Secretary-General Ban Ki-moon has called on the Syrian leadership, particularly President Bashar al-Assad, to end the violence against the demonstrators immediately, and plans to take up a draft resolution this week calling on him to step down and transfer power. “They are just watching the bloodshed in Syria and keep talking and talking without doing anything,” says Razan Zaitouneh, a lawyer and human rights activist, who joins us from Damascus. We also speak with Karam Nachar, a U.S.-based cyber-activist who is working with Syrian protesters via social media platforms. [includes rush transcript]

AMY GOODMAN: We turn to Syria. Reuters is reporting street battles are raging at the gates of the Syrian capital of Damascus. At least 26 people were reportedly killed this weekend in what activists say is the fiercest fighting around the capital during the 10-month uprising. Across Syria, activists say at least 62 people were killed Sunday.

To find out more about what’s happening, we’re going to go directly to Damascus right now to talk with Razan Zaitouneh, a lawyer, human rights activist, co-recipient of the European Parliament’s 2011 Sakharov Prize for Freedom of Thought. In the studio here in New York is Karam Nachar, a cyber-activist who is working with Syrian protesters via social media platforms. He’s a history Ph.D. candidate at Princeton University, specializing in the modern Middle East.

Razan, we’ve had a lot of trouble reaching you this morning. Please tell us what is happening right now, what you see in the streets of Damascus.

RAZAN ZAITOUNEH: The situation is getting actually more violent. The most critical situation is the Damascus suburbs of Damascus, especially in eastern Ghouta and in the western Ghouta. Until this morning, the whole area of eastern Ghouta is surrounded, and because totally closed, it’s not allowed to anybody to enter or get out of it. Shootings and killing is continuing for the third time. We keep getting more and more numbers of killed people, who we cannot know all of them, or the number of all of them, because the connections are cut off. People are suffering there. There is wide movement of displacement, people in this area, because there was several childs on buildings, and they had to escape. And though they cannot escape for outside the country, the area, they had to escape to a neighborhood inside the area, so they are still under the risk.

Also in Rankous, in the western [inaudible], it’s a disaster, the situation. Forty-five houses got destroyed since yesterday until today, after it was bombed by the army of the regime. And we’re still getting more numbers and names of killed people in these areas. In general, the average of death has increased during several last few days to 75 daily, 75 daily of killed people around the country, especially in the Damascus suburbs and in Homs. Today there was a massacre committed by a whole family. Parents and their four children got slaughtered in their own house, in their own house. And such a crime in Homs has been increasing during last few days.

AMY GOODMAN: U.N. Secretary-General Ban Ki-moon on Sunday called on the Syrian leadership, particularly President Bashar al-Assad, to end the bloodshed immediately. This is what he said.

SECRETARY-GENERAL BAN KI-MOON: When it comes to violence, I think that all the violence must stop. And particularly President Assad, as the leader of Syria, he has a much more important responsibility to resolve this situation, engage in political dialogue. And first and foremost, he must stop immediately the bloodshed.

AMY GOODMAN: That was Ban Ki-moon. Razan, it’s a little hard to hear you. We’re going through various proxies. You are—this is a very difficult situation for you, as you are underground. What do you think the U.N. needs to do? Are you satisfied with what the Secretary-General said?

RAZAN ZAITOUNEH: They have been saying the same for 11 months now, without doing anything on the ground serious to try to stop the violence. They are just watching people get killed. They are just watching the bloodshed in Syria and keep talking and talking without doing anything. Until this moment, they are not able even to issue a resolution from the Security Council to condemn this regime. Actually, honestly, I don’t hope anything from them. I cannot imagine that after 11 months, they still cannot do anything serious to stop violence in my country against my own people.

AMY GOODMAN: Karam Nachar is with us in New York. The rebel forces are taking on a name of their own.

AMY GOODMAN: A number of soldiers have defected, are defecting?

KARAM NACHAR: Right, and they continue to do so. And so, now the estimate that we have is 40,000 people actually constitute this body called the Free Syrian Army. It’s divided among 12 different divisions or battalions that are scattered all over the country. They’re particularly powerful in Homs and also in the countryside of Damascus, where we see the biggest amount of violence right now.

AMY GOODMAN: Razan Zaitouneh, are you worried about your own safety right now in where you are, as you travel from one place to another?

RAZAN ZAITOUNEH: Personally, I’m not afraid about myself anymore. When you see daily dozens of people get killed, whole families get slaughtered, it’s not important anymore about yourself, actually. We have a bloodshed daily around the country. Death became a normal thing to us in Syria. Maybe to [inaudible] death, we deal with it until—

AMY GOODMAN: Razan? We seem to have lost Razan Zaitouneh. It took hours this morning even to be able to reach her and to go through various proxies to disguise her location. She’s a lawyer and human rights activist in Damascus, Syria, still there. The most intense fighting now is in Homs, as we just heard, and in the suburbs of Syria. And Karam Nachar, cyber-activist, here in the United States, working with Syrian protesters via various social media platforms, thank you very much for being with us. 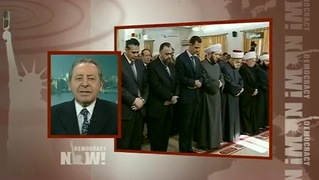