On “Columbus Day” — known to many as Indigenous Peoples Day — we’re joined by Dennis Banks, a legendary Native American activist from the Ojibwe Tribe. In 1968, he co-founded the American Indian Movement. A year later, he took part in the occupation of Alcatraz Island in California. In 1972, he assisted in AIM’s “Trail of Broken Treaties,” a caravan of numerous activist groups across the United States to Washington, D.C., to call attention to the plight of Native Americans. That same year, AIM took over the Bureau of Indian Affairs building in Washington, D.C. In early 1973, AIM members took over and occupied Wounded Knee on the Pine Ridge Indian Reservation for 71 days, which some have come to call Wounded Knee II. Earlier this year, he led a cross-country walk from Alcatraz to Washington calling for the release of imprisoned Native American activist Leonard Peltier. Banks shares his thoughts about Columbus Day, the U.S. treatment of American Indians, and his own story of growing up in the BIA boarding school system. [includes rush transcript]

AMY GOODMAN: We’re on the road in Durango, Colorado, at Fort Lewis College, which graduates more Native Americans than any four-year college in the United States. I’m Amy Goodman. But we’re going now to New York, where Dennis Banks is, the legendary Native American activist from the Ojibwa Tribe. In 1968, he co-founded the American Indian Movement. A year later, he took part in the occupation of Alcatraz Island in California. In 1972, he assisted in AIM’s Trail of Broken Treaties, a caravan of numerous activist groups across the United States to Washington, D.C., to call attention to the plight of Native Americans. That same year, AIM took over the Bureau of Indian Affairs building in Washington, D.C. In early 1973, the American Indian Movement took over and occupied Wounded Knee on the Pine Ridge Indian Reservation for 71 days. Earlier this year, he led a cross-country walk from Alcatraz to Washington calling for the release of imprisoned Native American activist Leonard Peltier, who’s been held for 35 years.

Dennis Banks joins us in New York. This weekend, he served as a jurist in the Russell Tribunal on Palestine. We’ll get to that in a moment, but as we broadcast today on the federal holiday known as Columbus Day, that others call Indigenous Peoples Day, Dennis Banks, can you share your experience as a Native American in this country?

DENNIS BANKS: Well, first of all, I’ve been watching your program this morning, and—with these young people from the college, and I want to say that I feel great that—you know, that the young people are really getting up there and speaking. And it feels like now I—you know, I’m almost 80 years old—I can sit back and retire, you know, and say, “Look, our young people are taking over.” And that’s great. That’s what I’d like to see. I’m very impressed with the students you had on there this morning.

But I was going to say, are we still talking about Columbus Day? You know, it’s been so—what, it’s been four years since I talked to you, Amy. This is, you know, when the Longest Walk 2 arrived in Washington, D.C. And now we’re talking about—we should be talking more—I don’t want to talk about Columbus, but I will talk about this day. In South Dakota, which I thought would be the last one to adopt a day like this as a Native American day, but they have moved forward, and they’ve proclaimed this day as Native American Day. And it is a day for observation, celebration and, you know, looking at the contributions that native people have made, not only in South Dakota, but in Minnesota and all around Indian country. And that’s what this day should be about.

And I don’t want to reflect about, you know, the lost explorer. You know, they’ve got towns named after him, like Custer, South Dakota, is named after Custer, a man who was, you know, bent on killing native people. But people honor those kind of renegades and those kind of rogues. So, I want to look at the more positive things, and that’s—and it’s good. I’m glad that you’re carrying this day, though—I really am—and being at Fort Lewis. I’ve spoke there previously two or three times.

AMY GOODMAN: Dennis Banks, for people who are not familiar with these boarding schools that Native Americans were put into over the years, can you describe what your experience was? Where did you live? Where were you sent? What happened to you in these schools growing up?

DENNIS BANKS: I was in the boarding schools when punishment was very severe if you ran away. This was during the early ’40s. I was taken to a boarding school when I was four years old, and taken away from my mother and my father, my grandparents, who I stayed with most of the time, and just abruptly taken away and then put into the boarding school, 300 miles away from our home. And, you know, the beatings began immediately, the—almost the de-Indianizing program. It was a terrible experience that the American government was experimenting with. And that was trying to destroy the culture and the person, destroy the Indian-ness in him and save the human being, save the—kill an Indian, save the man. That was, you know, the description of what this policy is about, about trying to—

DENNIS BANKS: I lived on the federal—or, on the Leech Lake Indian Reservation, where I was born, in northern Minnesota. And I was taken to a boarding school 300 miles away to the south, southernmost part of Minnesota, the southwestern part, called Pipestone Indian School. I stayed there three years—six years—

AMY GOODMAN: And how—

AMY GOODMAN: How did you communicate with your family? And how often did you get to see them? Did you get to talk to them?

DENNIS BANKS: Never. Never. You know, they cut off all communication with your parents, and a lot of letters, which I found later in—I stayed there for six years without communicating to—with my parents at all. And finally, they let us go home for six years. Of course, we couldn’t speak the language. We could speak only English and—what these young people were talking about.

But there was severe punishment for running away from that kind of system. I ran away. I kept running away. Almost once a week, I’d run away from those schools. They’d catch me. They’d bring me back to the school, beat me. And it was—it was terrible. I mean, there was other kinds of punishment that we went through, as well. And it was—now that, it was a—that kind of experience, I still remember what it is like today. And I have a friend who has been—who had been my friend for over 70 years now, and we remember those days. There were—we stuck together. A lot of people stuck together. Just being together, that’s what saved a lot of us from terrible consequences of speaking. But eventually, they—you know, they kept beating me down, and I kept—so I started learning English, and I started learning who the presidents were. I started learning all that stuff.

And then they let me go home for 30 days. Six years. And I asked my mother, I said, “Why didn’t you write to me?” And she—you know, and she says, “I did.” But I never—I never questioned beyond that. And then there was—they sent me to another boarding school in North Dakota, another 200 miles away. I was there for three years. And then, after that, same thing: no—only English, you know, corporal punishment. And then I went home for another 30 days, asked my mother, “Why is it you didn’t write to me again?” She says, “I did, and I did.” Then they sent me to another boarding school in South Dakota further away, so another 400 miles. I kept running away from these schools. And I finally ran away from the last one, and I finally made it home.

And so, I wanted to say, Amy, that this not only happened to people in North Dakota and South Dakota and Minnesota, but all across the country, thousands upon thousands of young students, Native students, were taken from their homes, and some were forcibly taken, some because of economic times allowed that to happen, but it was always taking them away from the parent, separate them from the parents for long periods of time, and which they did with me. And all of a sudden, I lost my family relationship with my mother. I lost that feeling with my mother, because I thought she abandoned me.

And it wasn’t ’til almost just three years ago when my daughter was—they were doing a documentary on Dennis Banks, and they found—they went to—in the federal depository records in Kansas City. And she called me, and she says, “Dad, we found” — “Dad,” she said, “we found your—we found your school records.” And I said, “Bring them back.” So she brought them back, and I started looking at them. And she says, “Dad, we also found something else.” She handed me a shoebox. And I opened up the shoebox, and those were letters, letters from my mother. And I started opening them up, and I started reading them. And in the second one, there was a letter to the superintendent of the school that said, “Here is $5. Please send my children—my son back home to me.”

And I couldn’t finish reading these letters, because I was just tearing up and—so I went to the grave site. My mother had passed away. When she did pass away, I went to bury her, but there was no emotions with me. And then, going there this time with the letters—and I was reading the letters. I had a chair; I was sitting right by her grave, and I started reading these letters. And I knew that she loved me then. I mean, even now, even at this moment, I feel that, man, it’s a hard—it’s a hard experience to tell people. But I tell them anyway. I tell what happened, because it was a terrible, terrible experience. But it failed, failed miserably. I mean, but even today, I mean, I know some of the language. I don’t know—I don’t know all the language. I know a lot of songs, which came back to me. But the language, it seems like you start—you want to say something, and then you remember the beatings and stuff like that. And so—but it was terrible. 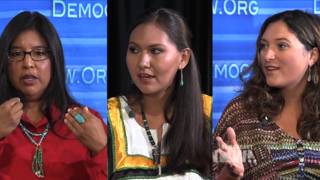