Dennis Banks, the legendary Native American activist and co-founder of the American Indian Movement, was in New York City this weekend to serve as a jurist at the Russell Tribunal on Palestine, an international people’s tribunal created in 2009 to bring attention to the responsibility other states bear for Israel’s violations of international law. Banks says, “What is happening to [Palestinians] is what we went through during the last century. Unfortunately, it is the same, same people [backing it]: it is the U.S. government, which funnels money to Israel, and then it goes to hurt the Palestinian people.” [includes rush transcript]

AMY GOODMAN: Dennis Banks, you shared this story of your growing up and your separation from your culture on Friday night at the opening of the Russell Tribunal. And I’d like to ask you about the Russell Tribunal on Palestine, why you have become a part of this, and just what this is that took place this weekend in New York, where you are right now.

DENNIS BANKS: The Russell Tribunal was—it was a collective of people across this country, around in Europe. And Alice Walker was on the tribunal. Angela Davis and Harry Belafonte came there, giving advice to the tribunal. And there were other people there. And we came together to look at the conditions in Palestine and what is going on there. And what we found was really troubling for me, because I began to see the massive amount of military aid going to Israel from the United States. And that’s what I started having trouble with inside of me, is that how could this government, my government—how could it look the other way when so much damage is being done to Palestine by the Israeli military? And the—

AMY GOODMAN: Dennis Banks, I wanted to share with you the comment of one of the people at the tribunal. On Sunday, Palestinian history and political science professor Saleh Hamayel explained why the fate of Palestinians in Israel has been different from that of Native Americans on this continent.

SALEH HAMAYEL: Whenever a colonial settler situation never used the natives as labor force, their fate was always genocide—total physical extermination. Now that was not easy to do in the middle of the 20th century. I mean, fortunately for us, the Zionist project came in 1948. It was too late to duplicate what happened for the Indians of North America.

DENNIS BANKS: I think that he was a very—he has a—his presence is very strong. And I listened very intently to what he was saying. And afterward, we had a chance to look at the comparisons of what is happening, what is happening in Palestine now as to what happened with us during the '30s and the ’40s. And it's the same pattern. And that’s—I said that on the very first day, that what is happening to those people is what we went through during the last century. And it is—unfortunately, it is the same, same people: it is the U.S. government, it is—which funnels money to Israel, and then it goes to hurt the Palestinian people.

AMY GOODMAN: Dennis Banks, I want to thank you for being with us today, as we conclude this day of programming. We are broadcasting from Fort Lewis College in Durango, Colorado.

That does it for our show. Our Election 2012 tour continues today at noon in Moab, Utah, at Starr Hall. Then tonight at 6:00 p.m., we’ll be at the Mancos Opera House in Mancos, Colorado; then at 6:00 p.m. tomorrow in Taos, New Mexico. On Wednesday at 5:00 p.m., I’ll be in Santa Fe at the Chuck Jones Gallery, then 7:00 p.m. at the Lensic Performing Arts Center. Go to our website, tour.democracynow.org. 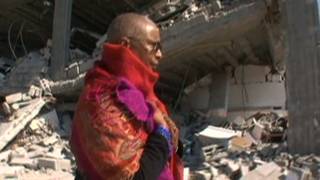