Over the past week, Israeli strikes have killed at least 116 Palestinians in the Gaza Strip, the majority of them civilians, including 27 children. Monday’s victims included four members of the same family — two parents and their two toddlers — who were killed in a bombing of a Gaza refugee camp that also left more than a dozen people injured, mostly women and children. We go to Gaza to speak with Dr. Mona El-Farra, director of Gaza projects for the Middle East Children’s Alliance and the health chair of the Palestinian Red Crescent Society of the Gaza Strip. Dr. El-Farra writes about living under siege on her blog, “From Gaza, with Love.” [includes rush transcript]

AMY GOODMAN: Secretary of State Hillary Clinton is heading to Jerusalem, Ramallah and Cairo today as the Israeli attack on Gaza enters its seventh day. Over the past week, Israeli strikes have killed at least 116 Palestinians, the majority of them civilian. The dead include 27 children. Palestinian rockets fired into Israel have killed three people over the past week. Earlier today, U.N. Secretary-General Ban Ki-moon called for an immediate ceasefire and said an Israeli ground operation in Gaza would be a dangerous escalation that must be avoided.

SECRETARY-GENERAL BAN KI-MOON: All parties must respect the obligations under international humanitarian law to ensure the protection of civilians. That is true of those bearing arms, and it is true of those giving the orders to use them. My message is clear: All sides must halt fire immediately. Further escalating the situation will put the entire region at risk.

SAMI ABU ZUHRI: [translated] The occupation is the side responsible for all that is happening. They killed Jabari during a time of calm, and they should take responsibility for their actions. We paid a huge price for our leaders—women and children—and we will not accept any ceasefire without guarantees for our security on all fronts.

AMY GOODMAN: For more, we go directly to Gaza, where we’re joined by Dr. Mona El-Farra. She is the director of Gaza projects for the Middle East Children’s Alliance and the health chair of the Palestinian Red Crescent Society of the Gaza Strip. She writes the blog “From Gaza, with Love.”

Dr. El-Farra, can you start off by describing what it is like there today?

DR. MONA EL-FARRA: Hello. Today, since the early hours of the morning, it is quiet. It is not as violent and tense as it was in the last five days. It is quiet, but the airplanes are still in the sky. The drones are in the skies. And we can hear intermittent shelling here and there. People are tense, are hoping for a ceasefire. But in the meantime, people don’t want here in—we don’t want ceasefire on any cost. We want guarantees from Israel that this will not happen again.

This is the situation in Gaza. The number of killed, you have mentioned it, but I’m sorry to say that the majority of the killing are amongst women and children. And some homes have been knocked down to the ground on top of its civilians, and the Israeli army later on said, “We are sorry. It was a mistake.” How come it is a mistake to kill, for example, 12 civilians in their home with women and children, and just what we hear is, “Sorry, it was a mistake”?

What’s happening is not a war. What’s happening, it is—it is unequal confrontation between very sophisticated jet fighters and naval vessels that’s bombing, bombing Gaza Strip, refugee camps, schools, apartments, blocks. Every place has been blocked. Either directly, we have been affected or affected by feeling terrified, hearing the bombing and the shelling and the shattered windows. I’m very concerned about civilian loss. Of course, I’m concerned about civilian loss from both sides. I am sorry about the three women or the three civilians on the Israeli side who were killed. But as I said, it is not equal confrontation. The situation is much, much different in Gaza, when we have terrified children in Gaza, children who have—don’t have enough water, don’t have enough food, no medications. The medications are getting less and less in the stores and in the medical facilities. And with all that, children who have no safe place.

No place is safe in Gaza. Many families left their homes to other safer place in the town or in the refugee camp, to be bombed again in the new places. So, no place is safe. Some of my friends advised me to leave my own apartment to another place. Today I have decided I am staying in my place, but I want to make sure that it is—I take my own precautions to protect myself and protect my daughter. But I don’t know what will happen next if this madness continue.

AMY GOODMAN: We just got this Reuters news flash, Mona El-Farra. The Egyptian president says that the Israeli, what he says, aggression against Gaza will end on Tuesday, according to the state news agency.

DR. MONA EL-FARRA: Yeah, if this will happen, I will be relieved. But after that, we need to look after the community who has been traumatized in the last—last week, it was like Hell for us. I’m glad to hear this. But what I have heard, that Israel postponed the land operation. So I’m not sure. In the end, I wish this will stop, because it is not nice to live in such circumstances. It is ugly. It is horrible. It’s horrible to feel that you are always subjected to all those attacks. I don’t know—I lost count how many air rides, but not less than 1,500 rides—sometimes in one night, 200 rides—raids, I mean, 200 raids. So I lost—I lost count with this.

AMY GOODMAN: What is—Dr. Mona, what does a raid mean? I’ve been reading your blog as you describe these nights. The last, what, five nights, you haven’t slept. What does it mean to live through this?

AMY GOODMAN: Describe Gaza for us.

DR. MONA EL-FARRA: OK, OK. It means that the last four days—I will describe the last four days, because today it is quietly. Continuous shelling every other minute, either in directly my area the airplanes are there, and they hit around me, not 100 meters sometimes from my building. This is directly against—against my area. Then you can overhear from the other areas, which is very noisy, as well, very, very noisy, because it is F-16 that’s bombing with large explosions. So the whole building—the whole building shakes. And some of my windows have been shattered, the windows. And other families, as well.

I describe it this way. It is simple, but it means that I have to hurry up, and with my daughter—my daughter, it is a grown-up now. She went through this 10 years ago. She’s now 20 years old. We have to hurry up and to go either next to concrete wall or underneath the table and feel a little bit safe. Then it continues. I try to sleep—for example, I thought it is over, then I try to sleep. I sleep—just shut my eyes a few minutes, and then it is again bombing and shelling from the air raids. “Raids,” I mean explosions coming, dropping on top of us from the sky, carrying destruction, of course, because with every—with every air raid, you start feeling the—I can see the fire from my window, the fire and the smoke. It is very close in my neighborhood. And I could hear the sirens of the ambulances carrying the casualties. And it is very dark. This is if it is air raids. But if it is by the sea, it’s even more terrifying for me, because I feel [inaudible]. My apartment is there, and the gunboats are again shelling the whole area. Yesterday, there was a shelling that landed just on the beach in front of me. It was very loud and horrifying.

In the meantime, I need to work. In the first day, I couldn’t leave home. Then second day I started to go to the Red Crescent Society, because I have duties there, as well, and we formulated a team of workers all through Gaza Strip—nurses, psychologists—and we opened hotline for population to bring us, bring the psychologists to comfort them and to support them, because my main concern are women and children, especially children who are subjected to such horror, and children who are feeling that their parents are no comfort now. The parents cannot protect their children. In the meantime, they have to be protected by us, by other emergency workers. So we opened this joint—

AMY GOODMAN: And Dr. Mona, Al Jazeera’s Nour Samaha has just tweeted, Israel—an Israeli air strike hit a kilometer from hotels where journalists are staying in Gaza. Israel has repeatedly broadcast a recorded Arabic-language warning to the people of Gaza to stay away from Hamas installations and personnel. I think it’s translated: “To the people of Gaza, Hamas is playing with fire and gambling with your fate. The Israeli Defense Force is moving toward the second phase of its operation. For your safety, you should stay away from Hamas infrastructure and personnel.” What do you say to the Israeli government, that says this is in response to Hamas and other groups firing rockets into Israel?

DR. MONA EL-FARRA: Yeah, I see it as the Israelis end up the occupation now, stop occupying and oppressing other nations, and then you gain your own security. Their security comes from ending the occupation and stop—and now stop the attacks. But, in general, they will never, ever—the Israeli population will never, ever enjoy security while other nation is under occupation. This is the main issue. This is my message. And if their government is attacking Gaza with all this madness for the Israeli security reasons, then Gaza population have the right to resist, to resist with whatever we have.

AMY GOODMAN: Well, I want to thank you for joining us, Dr. Mona El-Farra, chair of the Red Crescent of the Gaza Strip, health chair of the Palestinian Red Crescent Society. Thank you for joining us from Gaza. This is Democracy Now!, democracynow.org, The War and Peace Report. When we come back, we go to Phyllis Bennis in Washington, D.C., of the Institute for Policy Studies. Stay with us.

Gaza Ceasefire to Be Decided in Cairo, But Will Washington Rein In Israeli Occupation, Blockade?

NEXTGaza Ceasefire to Be Decided in Cairo, But Will Washington Rein In Israeli Occupation, Blockade? 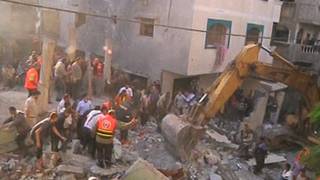 Palestinian Civilians Bear the Brunt of Unrelenting Bombings in U.S.-Backed Attack on Gaza