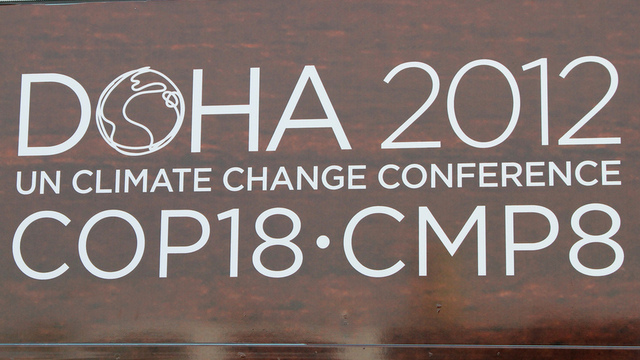 Democracy Now! broadcasts from the annual U.N. Climate Change Summit, as it convenes in Doha, Qatar. Tune in this week, Dec. 3-7, to see our coverage of the official proceedings, as well as events outside the conference.

As Amy Goodman noted in her recent column, “No world leader at the UN climate change summit hasn’t heard the warnings, but it will take popular pressure to make them act.”

Please send us suggestions for people at COP 18 we could interview and any interesting climate-related news updates to stories(at)democracynow.org with “Doha” in the subject line. You can also tweet us at @democracynow or message us on our Facebook page.

For years, Democracy Now! has closely followed the issues of global warming and climate change. We reported live from the three recent U.N. Climate Change Conferences in 2010 from Cancún in 2009, from Copenhagen, and in 2011 from Durban. In addition, we attended the World Peoples’ Summit on Climate Change hosted by Bolivia in 2010.

We have interviewed many of the world’s top scientists, writers, policy makers, activists, indigenous leaders and academics who focus on these issues. We also continue to follow the local and global environmental movements who are organizing to directly confront the root causes of global warming, advocate for climate justice, and to provide sustainable alternatives.

Watch our interview below with one of the world’s most prominent experts on climate science, Rajendra Pachauri, who criticized negotiators at the U.N. Climate Change Conference in Durban for not paying enough attention to science. Pachauri is chair of the Intergovernmental Panel on Climate Change, which won the 2007 Nobel Peace Prize along with Al Gore.