With the presidential election just one day away, 11th-hour Republican voter suppression could swing the critical battleground state of Ohio for GOP nominee Mitt Romney. On Friday, Ohio Secretary of State Jon Husted issued a last-minute directive which could invalidate a large number of legal provisional ballots by placing the burden on the voter to correctly record the form of identification provided to election officials. Over the weekend, long lines were reported across the state as voters braved cold weather to line up for hours at the polls. Even longer lines were reported in Florida, where early voters waited for up to six hours to cast their ballot. We’re joined from Cleveland by Ari Berman, contributing writer for The Nation magazine and author of “Herding Donkeys: The Fight to Rebuild the Democratic Party and Reshape American Politics.” [includes rush transcript]

StoryNov 06, 2012Election (Suppression) Day 2012: From ID to Intimidation, How to Protect Your Rights at the Polls

AMY GOODMAN: Well, there are problems around voting outside of Superstorm Sandy, so we’re going to go to Ohio right now. As Mitt Romney and President Obama push for a strong Election Day turnout, the 2012 election will likely wind up setting a record for early voting. More than 1.6 million people have already voted in the critical battleground state of Ohio, either at the polls or with absentee ballots. Over the weekend, long lines were reported across Ohio, as voters braved cold weather to line up for hours at the polls. Ohio Republican Secretary of State Jon Husted, meanwhile, has issued a new, last-minute directive that would disqualify ballots not accompanied by a form accurately documenting the type of identification used.

Joining us now from Cleveland is Nation reporter Ari Berman, who’s been tracking the new spate of voter ID laws. He’s contributing writer for The Nation magazine, author or Herding Donkeys: The Fight to Rebuild the Democratic Party and Reshape American Politics. His latest piece in The Nation is called “Eleventh-Hour GOP Voter Suppression Could Swing Ohio.”

Well, number one, there’s been very long lines at early voting sites, partially as a consequence of Secretary of State Jon Husted limiting early voting hours and forcing people to only be able to vote on this one weekend, having no nights or weekend hours and other early voting times.

The second thing is he issued this 11th-hour directive on Friday night concerning provisional ballots, saying—essentially shifting the onus from the poll worker to the voter to correctly fill out all the information on the provisional ballot form. If they don’t fill out that information correctly, the ballots will be tossed. This is very significant, because there was 207,000 provisional ballots cast in Ohio in 2008; 40,000 of them were discarded. It’s likely that the number of provisional ballots are going to increase substantially in 2012. So we’re looking at a situation where a lot of ballots could be wrongly cast. That could be larger than the margin of victory, if Ohio is close.

AMY GOODMAN: A new ThinkProgress investigation has found in Iowa, Romney poll watchers are being trained to watch for voters who show up without a photo ID, even though no voter ID law exists in that state.

ARI BERMAN: Yeah, this is something we’ve seen not only in Iowa, but also in Wisconsin. You also have the group True the Vote, the tea party group, urging their members to challenge voters in states like New Mexico, saying they need an ID when they don’t need an ID. They’re also urging their members to become GOP poll workers, so they could actually be inside the polling place on Election Day. They’re urging, for example, in Columbus, that their members be allowed inside the polling place, which create a lot of chaos on Election Day. I haven’t in Cleveland heard many reports of True the Vote people challenging voters during early voting. There’s only one early voting site in Cleveland, so it’s pretty easy to keep track of what’s happening. But come Election Day, there’s going to be a lot of different sites, and that’s, I think, when you could see the potential for a serious amount of chaos and confusion.

FLORIDA VOTER: All of the suppression that is being—that is happening in this country cannot be allowed to continue.

AMY GOODMAN: That’s Florida. If you could talk about Florida and then also bring it back to Ohio. We have this video of Greg Palast, the investigative journalist, in Montgomery County at an early voting line that just snakes through this one area. You know, the line is endless, and yet, there are only a few hours to vote in Ohio. But start with Florida, Ari.

ARI BERMAN: Sure. Well, Florida in 2012 is looking a lot like Florida in 2000. What Governor Rick Scott and the Florida Republicans did after the 2010 election is they cut early voting hours and days from 14 days to eight days, including banning it on the Sunday before the election, when black churches historically mobilize their constituents. Voting rights advocates said, this is going to cause a lot of very long lines and confusion. That’s exactly what happened yesterday when some counties reopened their polling places, even though they weren’t supposed to have them open, according to the governor. Then you had a situation where they ran out of absentee ballot forms, so they had to close in Miami-Dade County. Then they opened up again. And this is just very chaotic. And we’ve also seen seven-hour lines in places in Florida to be able to vote. Most people just don’t have seven hours to devote to voting. And people are saying it’s being run like a third-world country in Florida. Then some people are saying, “Well, it’s even worse than that, because we don’t even know if these votes are going to even be cast, if people are going to walk away from the polls.” This is all before Election Day, so who knows what it’s going to look like in Florida on Election Day. And it’s just really unfortunate that in a state like Florida, with such a history of election problems, this is occurring again.

In Ohio, we’ve also seen very long lines, also because early voting has been short, not as long as Florida, not as chaotic in Florida. It’s been cold in Ohio. It’s been raining and damp. But I think most people that I’ve seen have been waiting it out. Some people have got there after the polls have closed, and they’ve been told it’s too late to vote. But that, at least in Cleveland, has been a limited number of people. And so, I think most people are just sticking it out and realizing that these long lines are just something that they’re going to have to deal with right now as a result of the decisions made by the secretary of state.

AMY GOODMAN: Ari Berman, I want to thank you for being with us, contributor/writer for The Nation magazine. We’ll be doing a Democracy Now! election night special from 7:00 Eastern Standard Time to 1:00 in the morning. That’s Eastern time. Many of your stations will be running it; if not, go to democracynow.org.

And I’ll be speaking tonight at Barnes & Noble in Tribeca, which also got heavy water damage. But it’s opening, and I’ll be talking about climate change, peoples’ movements over the last year, and the election, at 6:00, 97 Warren Street.

Election (Suppression) Day 2012: From ID to Intimidation, How to Protect Your Rights at the Polls 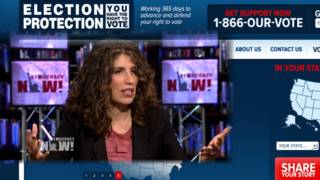 Election (Suppression) Day 2012: From ID to Intimidation, How to Protect Your Rights at the Polls