Exclusive: Leonard Peltier Speaks Out from Prison on Denial of Medical Care, Bid for Clemency

Leonard Peltier, one of the nation’s most well-known and longest-incarcerated prisoners, speaks out from the U.S. Penitentiary at Coleman, Florida, where he is currently held. Peltier is the Native American activist and former member of the American Indian Movement who was convicted of aiding in the killing of two FBI agents during a shootout on South Dakota’s Pine Ridge Indian Reservation in 1975. Sentenced to prison in 1977, Peltier is now 68 years old. Democracy Now! host Amy Goodman spoke with Peltier on Saturday when he called into a press conference organized by his supporters. [includes rush transcript]

AMY GOODMAN: On Saturday, after the Leonard Peltier concert at the Beacon Theatre, I had a chance to speak directly with Leonard Peltier, when he called into a news conference that was organized by Native elders, his lawyers and Pete Seeger. I conducted the interview in the front row of the press conference by telephone as he spoke to me from the U.S. Penitentiary at Coleman, Florida. Peltier was sentenced to prison in 1977. He’s now 68 years old.

AMY GOODMAN: Leonard, this is Amy Goodman from Democracy Now! I was—

LEONARD PELTIER: Oh, hi, Amy. How are you?

AMY GOODMAN: Hi. I’m good. I was wondering if you have a message for President Obama?

AMY GOODMAN: Your situation or the situation in the world or your own situation.

LEONARD PELTIER: OK. Well, I just hope he can, you know, stop the wars that are going on in this world, and stop getting—killing all those people getting killed, and, you know, give the Black Hills back to my people, and turn me loose.

AMY GOODMAN: Can you share with people at the news conference and with President Obama your case for why you should be—your sentence should be commuted, why you want clemency?

LEONARD PELTIER: Well, I never got a fair trial, for one. You know, my case has been throttled from the moment they had grand jury hearings. They had somebody on the grand jury hearing, at the hearing testifying against me I’ve never met in my life. And from the extradition from Canada, they violated international laws. And then at the trial, they had admitted racists—at the trial, they had admitted racists on the jury. They wouldn’t allow me to put up a defense, and manufactured evidence, manufactured witnesses, tortured witnesses. You know, the list is—just goes on. So I think I’m a very good candidate for—after 37 years, for clemency or house arrest, at least.

AMY GOODMAN: What would house arrest mean? And can you describe your conditions in the prison in Florida where you are right now?

LEONARD PELTIER: Well, I’m in a United States penitentiary with—a supermax penitentiary. And it’s like all the rest of the penitentiaries. And house arrest would be that I’d be home on—I’d be home on house arrest. I’d probably have to wear an anklet, a bracelet on my ankle, but that would be a lot better than this. At least I could get some medical treatment then. You know, I got real bad prostate right now, and it’s just getting worse and worse. It ain’t getting any better. It isn’t healing itself, so, you know, it just continues to grow worse.

AMY GOODMAN: You were convicted of aiding and abetting the killing of these two FBI agents. What is your response to that?

LEONARD PELTIER: Well, originally I was convicted of first-degree murder, but after their case fell apart, they confirmed the conviction on the most critical evidence against me, the murder weapon. Then we filed a Freedom of Information Act and found two documents where they had done scientific tests from their firearms laboratory, and it came out negative. So this was a piece—another piece of manufactured evidence, besides Myrtle Poor Bear, the witnesses and stuff like that. But, so then there case fell apart.

And then, in '92—in 1985, when the federal 8th Circuit Court of Appeals judge, Judge Heaney, asked the prosecutors just what was Mr. Peltier convicted of, because we cannot find no evidence of first-degree murder in the record, the prosecutor, Lynn Crooks, stated that the government doesn't know who killed the agents, nor does he know what participation Leonard Peltier may have had in it. So, in 1992, I filed an appeal, again asking, “What am I—what was I in prison for if the government doesn’t know what I’m in here for?” So they changed it to aiding and abetting, which is illegal, because I was never indicted for it, I was never prosecuted for it, and it takes a whole different defense in your trial. So I don’t know what the hell I’m in here for.

AMY GOODMAN: How is your health? And can you describe the conditions at Coleman?

LEONARD PELTIER: Well, it’s a United States penitentiary, you know, and they’re getting worse and worse every year. They’re not—they’re not like they were 20, 30 years ago.

And I have a—well, I have a bad prostate. I mean, you know, the doctor said that one side is—one side looks healthy, and the other side is not healthy, of my prostate, when they gave me that scope test over a year ago. But so far it hasn’t shown any cancer. I mean, you know, that’s pretty—this is one of the biggest killers of men. So, all they give me is a pill for it.

LEONARD PELTIER: Well, I got—well, yeah, I got all the other stuff, too—diabetes, high blood pressure, had a mild heart attack, had a mild stroke at one time. I mean, I’m falling apart.

AMY GOODMAN: Do you have any hope that you will be freed?

LEONARD PELTIER: Well, you know, according to the laws, they have the 30-year mandatory release law. After 30 years, I was supposed to be released. Of course, that went by. Come February, I’ll have 37. But also, when I was sentenced to prison, a life sentence was seven years. I did not get life without parole; I got a life sentence. So I’ve done actually about five, six life sentences now. And, you know, that’s really—you know, they’re in violation of their own laws again, just on that. So, and I don’t know. I’m fighting. I’m fighting for it. I’m going to try to get out.

AMY GOODMAN: What is your—

LEONARD PELTIER: Can’t predict that. So far—so far, it ain’t looking very good, I’ll tell you that much.

AMY GOODMAN: What is your response to the FBI that campaigns against your release?

LEONARD PELTIER: Oh, they’re full—they’re full of crap. You know, they’re the ones that should be investigated for all the murders they committed on Pine Ridge. They supported that, those killings. They financed it. They gave intelligence and armor-piercing ammunition and sophisticated weaponry. This was all done—this was all stated by Duane Brewer, who was one of the leaders of the GOON squads on the reservation. So, I mean, they’re the ones who should be investigated, which, by the way, some—I might add now, some of the Indians and one state senator—state senators in South Dakota are now calling for an investigation on that. They are going to put it together. And the son of Tim Johnson, who is an attorney in one of the—in the attorney general’s office in South Dakota—Tim Johnson is a congressman over there. His son is going to lead that investigation.

AMY GOODMAN: And what’s the significance of that?

LEONARD PELTIER: Well, to put the murderers in jail. I mean, that’s the way I look at it. I mean—

AMY GOODMAN: For people who don’t know about your case, especially young people, how would you like to be described? How would you, Leonard Peltier, like to be known to them?

LEONARD PELTIER: Well, just somebody that stood up for his people’s rights and who tried to stop the Termination Act and all the other crimes committed against my people. That’s the only reason I’m here. They ain’t got me—they ain’t proved nothing about me. They ain’t proved I did anything, let alone kill somebody.

AMY GOODMAN: What would you do if you were free?

LEONARD PELTIER: Well, I’d probably go home on house arrest. I mean, that’s the only thing I can expect, because I don’t think Obama is going to give—he’s going to do what Bill Clinton did, and he ain’t going to give no clemencies until his last year. He’s just not going to—it’s not going to happen. I really don’t believe it. So, I’m trying to—we’re trying to—George Bush signed the Second Chance Act, which is house arrest, and so we’re trying to push that, so I can get over there, at least to maybe get some—if I do get the house arrest, I can at least get some medical treatment, you know, because they’re not giving—they’re not giving it to me. They’re just—you know, they’re not going to give it to me. That’s all there is to it. And, well, if I did, I’d go home to North Dakota. I got about 10 seconds left. That buzzer just give me about—well, about a minute, I think, I got left. But anyway—

AMY GOODMAN: What gives you hope?

LEONARD PELTIER: People like you and all the other supporters out there and people that are behind me, my people. That’s the only hope I got.

AMY GOODMAN: And the meaning of Harry Belafonte and Pete Seeger and about a thousand other people who came out last night to this event in your honor?

AMY GOODMAN: That was Leonard Peltier. I was speaking with him at a news conference on Saturday on the telephone. He was—he is in prison at the U.S. Penitentiary at Coleman in Florida. He’s been in prison for 37 years, is now asking President Obama for clemency. On Friday, a major concert was held here in New York calling for his release. Peltier is one of America’s most well-known and longest-incarcerated prisoners. Go to our website at democracynow.org to see him reading his own poetry and to see Peter Coyote describing his case. 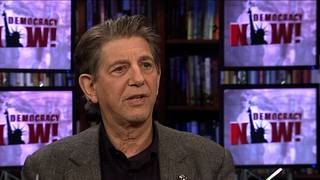