Democratic Rep. Raúl Grijalva of Arizona joins us to discuss his opposition to President Obama’s offer to cut more from Social Security than from the military in the ongoing negotiations over avoiding the so-called fiscal cliff. Obama has offered to cut some $100 billion from military spending, but even more from Social Security: $130 billion by adjusting the inflation index for Social Security benefits. Grijalva says Obama’s proposal opens the door “for some long-term damage down the road.” [includes rush transcript]

StoryDec 14, 2012Dean Baker: The Biggest Myth in Obama-GOP Spending Showdown is the “Fiscal Cliff” Itself

NERMEEN SHAIKH: We stay in the nation’s capital now as we turn to the so-called “fiscal cliff” deal that could come to a vote as early as Thursday. On Monday, the White House issued a new offer to House Republicans. The White House proposed leaving lower tax rates in place for everyone, except those earning $400,000 and above. That’s up from the $250,000 threshold the president has been demanding for months.

The offer also floats a lower revenue target of $1.2 trillion, down from $1.6 trillion. While Obama has offered to cut some $100 billion from military spending, he is proposing to cut even more from Social Security: $130 billion by adjusting the inflation index for Social Security benefits. The White House says the Social Security cuts would come with safeguards to protect the most low-income recipients.

AMY GOODMAN: Democratic Congressmember Raúl Grijalva of Arizona has rejected the Social Security cuts outlined in the plan, joining us right now from the Cannon Rotunda on Capitol Hill.

Congressmember, welcome to Democracy Now! Why have you rejected President Obama’s compromise with John Boehner, the House speaker?

REP. RAÚL GRIJALVA: Well, it’s a compromise built on very, very weak—on a very weak platform, particularly for Social Security and, as we go down the road, Medicare and Medicaid, in particular. I worry, and many of the members of the Progressive Caucus worry, that we’ve opened up a door here by talking about linking CPI in any area. And with Social Security, once you open that door, then—

NERMEEN SHAIKH: Representative Grijalva, can you explain what CPI is, the Consumer Price—

NERMEEN SHAIKH: —and why it’s relevant in the negotiations?

REP. RAÚL GRIJALVA: It’s relevant in the negotiation because that’s the basis—that’s the basis by which potential increases to recipients. And, you know, in my district, the people that receive Social Security, whether—whether it’s a retire—their retirement benefit or a disability or dependent children, they depend on that for the inflationary rate and for them to be able to adjust what they receive with regards to what’s going on in the economy. And we know what’s going on in this economy. And it’s harder and costlier.

And for us now to open that door now and to allow that bridge to be connected, you might want to say that we’re just only going to deal with one portion of the strata. I don’t believe that. And I believe that in the long run, we have taken a program that has been a bedrock program for the American people and opened the door for some long-term damage down the road. There are so many things that can be done to generate revenue that we’re not looking at, that’s not on the table. Even Simpson-Bowles says Social Security does not create the deficit. It is, though, a source of revenue. And that’s how it’s being looked at in terms of these cuts.

NERMEEN SHAIKH: Representative Grijalva, can you talk about some of the key constituents who would be most affected if this proposal goes through?

REP. RAÚL GRIJALVA: Well, in my district, a large percentage—I would say over half—and many in the country, Social Security is their only source of income, their sole source of income. We’re talking about people with disabilities that Social Security assists. We’re looking upon dependents and survivors. This is not—this is not a group that’s readily going to go out and make up the difference in any potential cut. And by opening this door, you are talking about benefit cuts. You can—you can put whatever kind of ornaments you want, but it is a benefit cut. And many of us see that, and we see this link, in the long term, to be something the Republicans have been wanting as a means to begin to deal with Social Security and deal with the trust fund and deal with the fact that it is—that the rate of inflation has dictated what the increases have been for recipients.

AMY GOODMAN: Have spoken with President Obama? How do you—and how much consensus do you feel you have in the House right now to oppose cuts to Social Security? And compare it to military spending.

REP. RAÚL GRIJALVA: Yeah, well, you know, military spending, saying it’s a—the proposal, as I understand it, is $100 billion. Even Gates proposed more cuts than that on defense, on antiquated weapons and making sure that we took care of our troops. But let’s look at the fact that we continue to build weaponry that is of no utility in this age and, more importantly, of no utility in the whole issue of disarmament and no utility in the whole issue of maybe restoring some sense of balance and peace in this world.

Having said that, it should be an area that is not sacrosanct. But at the same time, what the Progressive Caucus has said over and over again, Social Security, Medicare and Medicaid, those programs deserve to be strengthened and improved. There should be a discreet discussion about improvement and strengthening. And there should be other things on the table, Amy, other things like a transition tax for corporations and for Wall Street transfers of a million dollars in the stock market. There should be some cuts in the subsidies for corporations.

There should be some regulations and oversight to make sure that we don’t get in the catastrophe that we got into. This amnesia that we don’t know how we got here is possibly the most bothersome, to me, that we will repeat, and use this opportunity and use the debt ceiling as an opportunity to further push the agenda, which has been the hard right’s agenda, which is to begin to dismantle systematically the support system that’s out there for the American people. And that support system is what the federal government does with programs like Social Security and education.

AMY GOODMAN: Congressmember Raúl Grijalva, we want to thank you very much for being with us, Democrat of Arizona, co-chair of the Congressional Progressive Caucus. When we come back, a Democracy Now! exclusive: an interview with Leonard Peltier in prison in Florida, in prison for more than 37 years. Stay with us. 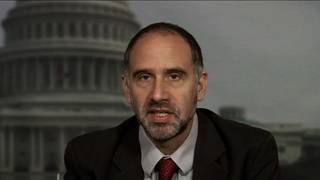 Dean Baker: The Biggest Myth in Obama-GOP Spending Showdown is the “Fiscal Cliff” Itself