A year after calling on world leaders to do more to save the planet at the COP17 in Durban, 22-year-old college student Anjali Appadurai is in Doha to continue her advocacy for climate justice. After initially being denied entry to the Doha climate summit’s first week, Appadurai is attending the conference to represent again the voices of youth activists worldwide as part of the group Earth in Brackets. [includes rush transcript]

AMY GOODMAN: We’re broadcasting live from Doha in the Gulf country of Qatar, where the 18th COP is taking place. That’s Conference of Parties, the U.N. Framework [Convention] on Climate Change. We turn now to Anjali Appadurai, a 22-year-old college student from College of the Atlantic in Bar Harbor, Maine, and climate justice activist. Last year at the climate talks in Durban, Anjali made headlines when she addressed the summit on behalf of youth delegates. In a moment, she joins us here in Doha, but first let’s go back to that speech last year.

CHAIRPERSON: I’d now like to give the floor to Miss Anjali Appadurai with College of the Atlantic, who will speak on behalf of youth non-governmental organizations. Miss Appadurai, you have the floor.

ANJALI APPADURAI: I speak for more than half the world’s population. We are the silent majority. You’ve given us a seat in this hall, but our interests are not on the table. What does it take to get a stake in this game? Lobbyists? Corporate influence? Money? You’ve been negotiating all my life. In that time, you’ve failed to meet pledges, you’ve missed targets, and you’ve broken promises. But you’ve heard this all before.

We’re in Africa, home to communities on the front line of climate change. The world’s poorest countries need funding for adaptation now. The Horn of Africa and those nearby in KwaMashu needed it yesterday. But as 2012 dawns, our Green Climate Fund remains empty. The International Energy Agency tells us we have five years until the window to avoid irreversible climate change closes. The science tells us that we have five years maximum. You’re saying, “Give us 10.”

The most stark betrayal of your generation’s responsibility to ours is that you call this “ambition.” Where is the courage in these rooms? Now is not the time for incremental action. In the long run, these will be seen as the defining moments of an era in which narrow self-interest prevailed over science, reason and common compassion.

There is real ambition in this room, but it’s been dismissed as radical, deemed not politically possible. Stand with Africa. Long-term thinking is not radical. What’s radical is to completely alter the planet’s climate, to betray the future of my generation, and to condemn millions to death by climate change. What’s radical is to write off the fact that change is within our reach. 2011 was the year in which the silent majority found their voice, the year when the bottom shook the top. 2011 was the year when the radical became reality.

Common, but differentiated, and historical responsibility are not up for debate. Respect the foundational principles of this convention. Respect the integral values of humanity. Respect the future of your descendants. Mandela said, “It always seems impossible, until it’s done.” So, distinguished delegates and governments around the world, governments of the developed world, deep cuts now. Get it done.

AMY GOODMAN: That was Anjali Appadurai, a College of the Atlantic student from Bar Harbor, Maine, addressing the Durban U.N. climate summit. This year, she was banned from the Doha summit for the first week. She’s allowed in right now, and she’s here to tell us what happened.

Anjali, thanks so much for being with us. What happened? After giving that dramatic address last year, how is it that they banned you from this year’s summit until you fought back this past week?

ANJALI APPADURAI: Well, the—those who lost their badges in Durban were made to go through a re-accreditation process to get back into the conference this year. And basically, I didn’t pass that process, and so I was banned for—

AMY GOODMAN: Why did you lose your—

ANJALI APPADURAI: I had to have a personal meeting with the U.N. head of security, and he was not convinced, through my personality and my reputation, that I wouldn’t organize again.

AMY GOODMAN: Are you—what’s your role here? Are you allowed to hold protests within the summit?

ANJALI APPADURAI: The U.N. has a really specific set of guidelines for what youth are allowed to do and what kind of actions we’re allowed to take. So we’re technically allowed to protest; it’s just in a very sort of constricted space.

AMY GOODMAN: I wanted to play a message from the head of the COP, of the U.N. summit. This is a comment made here in Doha by the Christiana Figueres, the executive secretary of the U.N. Framework Convention on Climate Change. That’s the U.N. summit on climate change. During a news conference last week, she said, quote, “Civil society is not doing enough to encourage governments to raise their level of ambition,” unquote. And she argued governments can only do what they’re elected to do. Well, just before the summit, she also addressed the Conference of Youth. This is what she said.

AMY GOODMAN: “Don’t let your impatience move you [into] inaction or [into] cynicism,” says the head of this U.N. climate summit. And yet, when you acted, you were barred. How did you—

AMY GOODMAN: You had a personal meeting with Christiana Figueres.

ANJALI APPADURAI: Yes. I think the main problem that society society had here was that the relationship between—between civil society and this political process seems to be less one of “We are valued in this space,” and more one of, “It’s an incredible privilege for us to be in this space, and there are going to be incredible punitive measures if we do anything out of line.”

AMY GOODMAN: What do you want to see here? And what are you doing this week? What ultimately caused you to be able to come in? Social media? What—

AMY GOODMAN: How you used the—

ANJALI APPADURAI: Right. Well, we had—we unleashed a Twitter storm on the secretariat, and personal notes were sent in through email and through Twitter. And I don’t know how much of an effect that had on her final decision, but it was definitely quite a morale booster for civil society to see that kind of consolidated effort.

AMY GOODMAN: And so, you’re here for this week. What are you doing?

ANJALI APPADURAI: I’m working with a couple of organizations—one, the Third World Network—and I’m here with my delegation, Earth in Brackets.

AMY GOODMAN: What is Earth in Brackets?

ANJALI APPADURAI: We’re a bunch of students—we’re an international group of students at the College of the Atlantic, which I know you know. And we’re here to track the policy and keep others at home updated through our blog. So we’re really focused in on the issues.

AMY GOODMAN: And what about for the first time seeing this Arab youth movement that we saw? Right at the beginning of the second week, hundreds marched in the streets of Qatar, which was a first.

ANJALI APPADURAI: Yeah, yeah. That definitely made history. We’ve been incredibly impressed by the Arab Youth Climate Movement. It’s a very cohesive movement, and they’re doing incredible things. They just have something planned. They’re very well organized, and they’re very much focused on their governments, putting pressure on their local governments.

AMY GOODMAN: What is your message to negotiators this year? You said last year, “You have been negotiating all of my life.” Has it changed?

AMY GOODMAN: You’re an American student. Your family is from southern India. What is your message to your president, President Obama?

ANJALI APPADURAI: As a student in the U.S., I urge Obama to change his stance on climate change. I urge him to follow through on what a lot of people thought was going to be the U.S.'s coming-out party for climate policy, Doha. And so, I would urge him and Todd Stern to work together to ease the U.S.'s position on this deadlock that they are almost single-handedly creating.

AMY GOODMAN: What do you mean by “deadlock”? What is the U.S. doing?

ANJALI APPADURAI: There’s a—like a very clear opposition. Developing countries are saying, “We need support from you in order to reduce our emissions. We need finance. We need support in terms of capacity building. We need technology from you.” And the developed countries are saying, “There’s no need for us to have any text on this, no negotiating text, and we’re going to move forward on a slower pace. Anything we do is going to only take effect after 2020,” when it’s far too late. Literally, in a meeting yesterday, the ministers were presented with a blank text. The heading was “enhanced action on adaptation,” and it was a blank sheet of paper. So that’s the kind of deadlock. We’re getting developed countries, like the U.S. and the EU, saying, “We don’t need any text on this,” and developing countries saying, “Yes, we do. We need this in order to reduce our emissions.”

AMY GOODMAN: Well, you see the negotiations going on in the United States. They have nothing to do with climate change—

AMY GOODMAN: —even though we’re just in the aftermath of Superstorm Sandy. They have everything to do with what they’re calling the “fiscal cliff,” and saying, “We don’t have enough money for the United States, let alone for other countries.”

AMY GOODMAN: Why should the U.S. pay?

ANJALI APPADURAI: Because the U.S. and all countries need to understand that the fiscal cliff and the economy are not disassociated from the climate. The climate is something that’s impending, not waiting for us, and it’s going to affect us all. Economies are not. So, developed countries need to make some serious shifting around of priorities, and they need to allocate what is needed to solve the climate issue, yeah.

AMY GOODMAN: Anjali Appadurai, I want to thank you very much for joining us. Anjali Appadurai is a student at College of the Atlantic. She graduates this year. She addressed the Durban U.N. climate summit and this year has been allowed back in for the last week to participate in protests here. Well, she is organizing actions here with other young people around the world.

This is Democracy Now! When we come back, we have an analyst talking about the Kochtopus. Stay with us.

From Fossil Fuels to Global Warming Denial, Koch Brothers May Be Biggest Force Behind U.S. Inaction 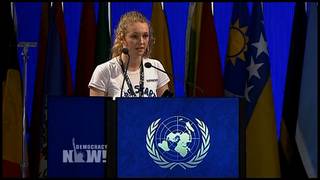 “Are You Here to Save Face — or Save Us?”: Brittany Trilford, 17, Addresses World Leaders at Rio+20