From Fossil Fuels to Global Warming Denial, Koch Brothers May Be Biggest Force Behind U.S. Inaction

The billionaire brothers Charles and David Koch are known for funneling vast donations into Republican campaigns in the United States. But what impact are the Koch brothers having on global warming? As the United States is accused of blocking progress at the U.N. climate talks in Doha, a new report says the Koch brothers may be the biggest force behind the climate stalemate. The Kochs run oil refineries and control thousands of miles of pipeline, giving them a massive personal stake in the fossil fuel industry. Researchers say they have also funneled tens of millions into climate denial science, lobbying and other efforts to derail policy that could lessen the impact of global warming. We’re joined by Victor Menotti, executive director of the International Forum on Globalization. [includes rush transcript]

StorySep 27, 2012The United States of ALEC: Bill Moyers on the Secretive Corporate-Legislative Body Writing Our Laws

AMY GOODMAN: Singfortheclimate.com. Yes, 5 percent of the Belgian population came out into the streets and sang this song. Today at the Doha summit, we went to a news conference where major climate negotiators from Belgium and the European Union sang this song, as well, singfortheclimate.com. This is Democracy Now!, democracynow.org, The War and Peace Report. We’re broadcasting from the 18th U.N. climate change summit. I’m Amy Goodman.

The billionaire brothers Charles and David Koch are known for funneling vast donations into Republican campaigns in the United States. But what impact are the Koch brothers having on global warming? As the U.S. is accused of blocking progress here at COP18 talks in Doha, a new report says the Koch brothers may be the biggest force behind the climate stalemate. The Koch brothers run oil refineries and control thousands of miles of pipeline, giving them a massive personal stake in the fossil fuel industry. But researchers say they’ve also funneled tens of millions of dollars into climate denial science, lobbying and other efforts to derail policy that could lessen the impact of global warming. The report is called “Faces Behind a Global Crisis: US Carbon Billionaires and the UN Climate Deadlock.”

To talk more about this, we’re joined by one of its authors, Victor Menotti, executive director of the International Forum on Globalization.

Victor, we welcome you to Democracy Now! And I just want to point out, for people who are watching on television, you may have noticed a spider over my left shoulder. And that is a piece of art here at the convention center. It’s a massive nine-meter-high sculpture by the sculptor Louise Bourgeois. It’s called Maman, and it’s got marble eggs inside the spider’s sac. And it was—she thought of it fondly, actually, for her mother, who was a weaver in France. You have an image of the—what you call the “Kochtopus,” Victor Menotti, not exactly what you consider a positive image, but not looking so different from this work of public art behind us.

VICTOR MENOTTI: It is—it’s the perfect backdrop to explain what’s going on here in Doha. It’s a follow-the-money story. And it goes from Doha to Washington, to Wichita, which is where the Kochs are based. A lot of people may think this sounds like a conspiracy theory, but if you look very soberly at what the—who’s moving the money and where it’s coming from, these two brothers, Charles and David, are now the world’s wealthiest individuals. Their combined net worth now exceeds that of the world’s wealthiest man, Carlos Slim. And they have spent more than anybody, more than any gas and oil company, more than even Exxon, in campaign contributions—

VICTOR MENOTTI: It’s Bill Gates. Number three is Warren—Amancio Ortega from Spain of Zara, the clothing company. Then Warren Buffett. But if you took the Koch brothers together and combine them, we consider them a single financial, political entity, the way they operate.

AMY GOODMAN: So they’re number one.

VICTOR MENOTTI: They’re at $80.2 billion, and Carlos Slim at $71.8 billion. So, they wield their wealth to really stop the process in the U.S. for phasing out fossil fuels. They’ve spent more than anybody on campaign contributions, lobbying expenditures, climate denial science. And they’re—we’re not saying they’re the only force. They are part of the fossil fuels complex. But they are the financial force and the ideological leaders of the countermovement.

AMY GOODMAN: I wanted to ask you about an action that took place this week. I wanted to play a comment of one of the people who were arrested this week protesting in Texas, as delegates and activists gather here in Doha at the U.N. climate conference. On Monday, two activists in Texas locked themselves inside of a section of pipe that’s part of the Keystone XL pipeline that’s now under construction by the company TransCanada. The pipeline would carry crude oil from Canada’s tar sands to the U.S. Gulf Coast, a project opponents say would produce lethal levels of carbon emissions while endangering communities along its path. President Obama now faces a decision about the pipeline’s approval, after delaying it until after the 2012 election. The section of the pipe where activists locked themselves would run less than a hundred feet from homes near Winona, Texas. This is Matt Almonte, speaking in the dark from 25 feet inside the section of pipe, after he locked himself between two barrels of concrete weighing over 600 pounds each.

MATT ALMONTE: So, this is the first night being here in this pipe. And basically, we’ve set up shop here. I feel it’s very important for people to feel empowered to take action against resource extraction. The Keystone XL pipeline is—it doesn’t really serve to benefit anybody but the corporations who will reap all of the profit at the expense of the communities that will be poisoned, through their water, through their air. And it’s just not right, and I wanted to plant myself in the middle of that fight.

AMY GOODMAN: That was activist Matt Almonte speaking 25 feet inside a section of the Keystone XL pipeline. He and two others were later removed from the pipe by police and charged with resisting arrest, criminal trespassing and illegal dumping. Victor Menotti, what does the Keystone XL pipeline, which thousands have protested and many have been arrested for in front of the White House in the last year—what does it have to do with the Koch brothers?

VICTOR MENOTTI: The 25 percent of the current tar sands imports, they process already. The Kochs have vast holdings in Canada in tar sands territory. They already have some of the networks of the pipelines. The refinery is existing in Corpus Christi. We call it the Koch Keystone pipeline.

AMY GOODMAN: Your final conclusions as you finish this “US Carbon Billionaires and the UN Climate Deadlock”?

VICTOR MENOTTI: That the world needs the United States to mobilize around the force of these Koch brothers to get private money out of politics and to isolate their extreme elements in the Republican Party. These aren’t all conservatives thinking this way. These are extremists, and they need to be isolated.

AMY GOODMAN: Victor Menotti, with the International Forum on Globalization. “Faces Behind a Global Crisis: US Carbon Billionaires and the UN Climate Deadlock” is his report. And we’ll link to it at democracynow.org.

Oh, I’ll be speaking in Oslo, Norway on Saturday, and we’ll be broadcasting from just outside the Nobel Peace Prize ceremony on Monday, so check that out and go to our website at democracynow.org. 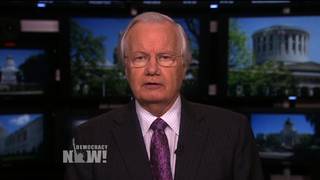