Broadcasting from the U.N. climate summit in Doha, we look at how young activists are loudly and unequivocally calling for drastic action to stop climate change. Youth delegates from around the world are urging the United States and other wealthy nations to deeply cut greenhouse gas emissions and compensate poorer nations for loss and damage from weather events caused by climate change. We’re joined by three guests: Amanda Nesheiwat, a 23-year-old environmental coordinator for the city of Secaucus in New Jersey, which suffered flooding during Superstorm Sandy; Angeline Annesteus, a Haitian student at the College of the Atlantic and member of the climate justice group Earth in Brackets, which has been participating in protests throughout the climate conference in Doha; and Marco Cadena, London-based organizer with Push Europe and Young Friends of the Earth Europe. [includes rush transcript]

AMY GOODMAN: We continue our live broadcast from Doha in the Gulf emirate of Qatar, where the 18th COP—that’s Conference of Parties—is taking place, the U.N. Framework Convention on Climate Change. We turn now to look at how young activists here are loudly and unequivocally calling for drastic action to stop climate change. They’re urging the United States and other wealthy nations to deeply cut their greenhouse gas emissions and compensate poorer nations for loss and damage from weather events caused by climate change.

We’re going to turn right to our three guests right here, a roundtable of some of the young voices here at the summit. Amanda Nesheiwat is here with us, 23-year old environmental coordinator of the city of Secaucus in New Jersey, which suffered flooding during Superstorm Sandy, forcing hundreds of residents, including the mayor, out of their homes. She’s also a member of SustainUS.

Angeline Annesteus is with us, originally from Haiti, now a student at College of the Atlantic in Maine, where she’s a member of the climate justice group Earth in Brackets, which has been participating throughout the week here in Doha.

And Marco Cadena is with us, an organizer with Push Europe and Young Friends of the Earth Europe, living in London.

We welcome you all to Democracy Now! The other day, when I saw you, Marco, you weren’t wearing this T-shirt that says “Push Europe: People Before Polluters,” you were wearing one that said “Weapons of Mass Destruction.” What was the image?

MARCO CADENA: The image was a massive oil rig, saying, “A Weapon of Mass Destruction,” yeah.

MARCO CADENA: Well, we came here with a clear message to governments: We want developed nations to act right now on climate change. We can’t wait. There is not a decade to waste. But we’re also using this opportunity for capacity building back home. So, at the moment, we—in Brussels, we have hundred activists training and getting ready for the next year when a COP is going back to Poland, and we’re going to work really hard to build a movement and actually make a real splash and get out into the public domain, because this climate change is the biggest-ever threat humanity faced, and we need to step up all together.

AMY GOODMAN: Amanda, you are what? The climate change coordinator in Secaucus, New Jersey?

AMY GOODMAN: Environmental coordinator. How old are you?

AMY GOODMAN: What does that mean, the environmental coordinator?

AMANDA NESHEIWAT: Well, I work on green initiatives, and I advise the mayor and counsel on any kind of environmental issues that we can basically tackle in the community. And I reach out to young people. You know, we have Green Summer Festivals, and we raise awareness about important environmental issues.

AMY GOODMAN: What did Superstorm Sandy mean to you? Has it changed the way people in New Jersey and around the United States view climate change?

AMANDA NESHEIWAT: Absolutely. You know, the reason why I’m here is to share our story back in New Jersey. After the—after all the panic subsided after the hurricane, a lot of people came to me as environmental coordinator to ask about climate change. You know, “What’s going on with that? What conference are you going to? Can you tell us a little bit more about it?” We saw a lot of elected officials come together, put their political differences aside, like, you know, Obama and Christie coming together. Bloomberg endorsed Obama. So, we’ve seen a lot of different kinds of changes and that climate change is a reality, especially in New Jersey at the moment.

AMY GOODMAN: Angeline, talk about what the environment means in Haiti.

ANGELINE ANNESTEUS: Environment in Haiti mean a lot, because Haiti is a country that has been hit by severe, extreme events, climate events, for almost every year. So, there is like—there is like—severe flood and extreme hurricanes severely affected the country, both directly and indirectly. So, every year, hundreds of thousands of people dying. Many have been displaced. And others stay homeless. So, as a youth, I think it’s my responsibility to take part in these kind of activity, to say something about, to do something about it. I would like to see climate justice. I would like to see a new Haiti. Haiti was—

AMY GOODMAN: What does climate justice mean to you?

ANGELINE ANNESTEUS: Climate justice, for me, is eradication of poverty. So that means that the developed countries need to take their responsibility by fulfill, you know, their—by delivering on finance, which is key for a country like Haiti to address its adaptation needs.

AMY GOODMAN: Marco, what does climate justice mean to you?

MARCO CADENA: All that, including the fact that currently the emissions in the atmosphere is—about 75 percent are coming from developed countries, countries who have been emitting for over a century, and now they’re trying to place the burden on developing countries, for those who barely have enough to eat. So, we have the severe injustice here, which we need to address and we need to act on. So, climate justice, in a very, very nutshell, means reducing—eradicating poverty through allowing poor countries to develop cleanly and sustainably, and opening up technology, finance, and getting developed countries to reduce their emissions as fast as possible.

AMY GOODMAN: I want to thank you all for being with us. That does it for our show today. We’ll be back here tomorrow. Amanda Nesheiwat and Angeline Annesteus and Marco Cadena.

And a correction: On Monday, we aired the comments of Fahad bin Mohammed al-Attiyah, chair of the organizing subcommittee for COP18. We misidentified him as Abdullah bin Hamad Al-Attiyah, the president of COP18. 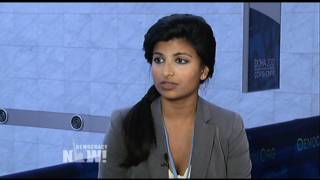