Brain Wars: How the Military Is Failing Its Wounded–ProPublica’s Joaquin Sapien

Official military statistics show that more than 115,000 soldiers have suffered mild traumatic brain injuries since the wars in Iraq and Afghanistan began. We speak to Joaquin Sapien, who has a done a series of articles on the issue for ProPublica. “The focus of my reporting was on how the military assesses soldiers for whether or not they have suffered a brain injury during their deployment,” says Sapien. “And what we found was that there were significant problems with a computerized test that they give to all the soldiers to kind of get a baseline of their cognitive functioning.” [includes rush transcript]

AMY GOODMAN: Joaquin Sapien, you did this series of pieces called “Brain Wars: How the Military Is Failing Its Wounded.” What did you find? What is the military doing?

JOAQUIN SAPIEN: Well, the focus of my reporting was on how the military assesses soldiers for whether or not they have suffered a brain injury during their deployment. And what we found was that there were significant problems with a computerized test that they give to all the soldiers to kind of get a baseline of their cognitive functioning. As it turns out, the test that they use, which is called the ANAM, Automated Neuropsychological Assessment Metrics, was not actually designed to detect brain injuries and was never really scientifically proven to diagnose these kinds of brain injuries. It’s more of a performance-based test. The idea was that you would give it to someone like an astronaut or some high-level elite soldier to see whether they had the cognitive ability to operate a very sophisticated piece of equipment. And then, after their deployment, they’re supposed to take the test again to see whether or not their cognitive function has decreased. The problem is that most soldiers don’t take the test again. The military just doesn’t give it, because they don’t have the confidence that the first baseline actually means anything, to begin with. And we uncovered that the reason why this particular test was selected is because people who had a stake in it, a professional or even a financial stake in it, were involved in selecting it. And so, there is a—you know, there’s a lot of nepotism involved.

AMY GOODMAN: Explain that. I mean, it’s amazing the way you lay this out. The people pushing this are the ones who are financially benefiting from this, and the Pentagon has been giving millions of dollars to this project.

JOAQUIN SAPIEN: Well, they spent about $42 million on this particular test, and they’ve given it to over a million soldiers since 2008. And the people who were involved had been for some time. I mean, before—around the time of the Gulf War is when this thing really started to come to fruition. And there was a group of researchers in the military who had been pushing for this for a long time, and some of which had moved on to Oklahoma University and to other locations. And what—the long story short is that they, sort of through a chain of contractors and subcontractors, developed a way in which they would administer this test to many, many soldiers, and the money that goes from one place or another kind of moves in this circle, going from—directly from the people who selected it to those who, you know, made it. So—and there are significant problems with it that is now under investigation by Congress.

And so, getting back to the point in hand, frankly, we don’t know whether or not this particular soldier has indeed suffered a brain injury. What we’ve seen are unnamed sources in various news media saying that that is a possibility. And it’s absolutely a possibility. I mean, a very large number of soldiers report having these injuries. This person had been—this is his fourth deployment. And, you know, somewhere between 100,000 and 200,000 soldiers have reported having these kinds of injuries.

But the second thing to consider is also whether this kind of injury can make someone more prone to the sort of violent tendencies that this person demonstrated. Right now, the state of the science does not necessarily prove that. There is a small but growing body of studies that suggest that maybe with damage to a certain part of the brain, in the prefrontal cortex, which is where our sort of behavioral inhibitors are located within the brain, then you might make sort of more rash decisions.

So, it remains to be seen whether, A, this person did absolutely suffer brain injury, and B, whether that’s responsible for his behavior. If he did suffer a brain injury and the military somehow didn’t catch it and deployed this person again, then I think that that gets right back to the subject of our reporting, which shows that there were major problems in how the military assesses these soldiers and how they treat them and whether or not they decide that they should—they are actually equipped to redeploy. 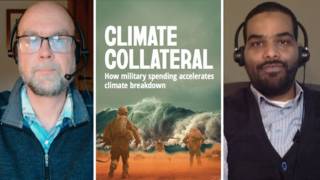