Amid U.S. vows to stay in Afghanistan until 2014, we speak with Afghan businesswoman Rangina Hamidi, who argues the U.S. presence there makes the security situation worse. “If the U.S. soldiers cannot do their job, as we are now seeing even more evidence of that philosophy, then I think it is only fair to ask them to leave,” Hamidi says. After residing in the United States, Hamidi returned to her native Afghanistan shortly after the 9/11 attacks. Just this year, she came back to the United States due to the deteriorating safety situation in her homeland. Hamidi disagrees with the argument that the U.S. occupation in Afghanistan improves the safety of women. [includes rush transcript]

StoryMar 16, 2012Afghan Massacre Sheds Light on Culture of Mania and Aggression in U.S. Troops in Afghanistan

AMY GOODMAN: Our guest with us today from Virginia is Rangina Hamidi, president of Kandahar Treasure, the first women-run business in Kandahar, a former resident of the United States who returned to her native Afghanistan shortly after the 9/11 attacks. Just this year, she came back to the U.S. due to the deteriorating safety situation in her homeland.

Rangina, we spoke to you in 2009 in Kandahar. We showed pictures by Paula Lerner, who just died of breast cancer, who won an Emmy for her coverage of and her photos of what was taking place in Kandahar. At the time, Rangina, you were speaking from Kandahar and said the U.S. soldiers must leave. It’s three years later. Your thoughts now?

RANGINA HAMIDI: Well, I thank you for having me. And it’s good to hear your voice again.

My thoughts are still the same, I think, pretty much. If the U.S. soldiers cannot do their job, as we are now seeing even more evidence of, you know, of that philosophy, then I think it is only fair to ask them to leave, because it will be good for America. And, unfortunately, Afghans will suffer at the end. I’m not suggesting that by U.S. soldiers leaving, that our country will develop into a prosperous, peaceful nation. But in the end, I mean, we’re making the war worse by having a mere presence there. And so, if the job cannot be done right, it is a good idea to leave.

JUAN GONZALEZ: And Rangina, it was precisely in the area around Kandahar that President Obama sent in more U.S. troops to attempt to pacify the area and beat back the Taliban resistance. How has the security situation deteriorated there? Can you talk about that?

RANGINA HAMIDI: Well, I was pretty much based in Kandahar city. And the reason I was not able to go to the districts, the areas close to the city, was simply for security reasons. By year 2011, or even beginning of 2010, there was very little movement between people from the city to the districts and back and forth. So my perspective is merely and only from the city. And unfortunately, having lived there for nine years in a row, I witnessed some of the horrific, violent activities that happened in the city, one including that cost the life of my—you know, my father, who was the mayor of Kandahar city, last July. So you can—you know, it is very difficult for me, personally, to accept the military reports or other international reports who constantly claim that security was getting better, because on a daily basis, life for us citizens living in the city, things were getting worse, day by day. And that is the reason why I’ve left the country. So I don’t know where these reports are coming from.

And it’s interesting hearing your conversation with the previous speaker, that the military unfortunately might sometimes be holding information, the correct information, just to, you know, go forward with their own political agendas. You know, I’m an eyewitness to the events on the ground in Kandahar, where I can very—you know, with my very sane mind, say that things were not getting any better for security purposes, even with the additional troops that Obama sent.

AMY GOODMAN: At the White House, President Obama was asked in an interview how the massacre impacts U.S. plans in Afghanistan.

PRESIDENT BARACK OBAMA: What we try to do is create a responsible pathway for an exit, where, by the end of 2014, we’ll have all our troops out.

JON DELANO: So, this doesn’t make you more inclined to move us out faster?

PRESIDENT BARACK OBAMA: Well, it makes me more determined to make sure that we’re getting our troops home. It’s time. It’s been a decade. And frankly, now that we’ve gotten bin Laden, now that we’ve weakened al-Qaeda, we’re in a stronger position to transition than we would have been two or three years ago.

AMY GOODMAN: So after the massacre, President Obama has said that they are not speeding up the departure of the U.S. troops. Rangina Hamidi, so often women are used as the reason that the U.S. troops should not leave immediately, that the U.S. troops are saving the women. And this goes back to Laura Bush talking about this under President Bush, giving one of—the first First Lady radio address, saying it’s for the women. Your thoughts on this?

RANGINA HAMIDI: Yeah, unfortunately, women were used, and they will continue to be used on one—you know, on one spectrum or the other, you know, by the Taliban, on one hand, but by U.S. and the semi-Afghan government, on the other hand. Unfortunately, you know, I, speaking as an Afghan woman on behalf of my, you know, hundreds and thousands of sisters that are still back home and trying to continue their life, we know that the U.S. military has not necessarily helped us, either. You know, this is contrary to popular opinion here. You know, when we lose our loved ones, be them a son, a brother, a husband, we’re also suffering as women. And this is—you know, this is the reality picture that Paula and I used to so dearly hold, that while some women’s organization, who are very pro-women and, you know, you can call them feminist organizations, based in Kabul, you know, they claim and say that the military presence in Afghanistan is actually helping the situation of women, I, on the other hand, have constantly disagreed with them, not necessarily in the sense of American presence—I’m not against Americans’ presence in Afghanistan, but the military presence is not a plus sign for us.

I mean, the military, on the contrary, in my opinion, is actually making things worse for us, because whenever we, as women, as Afghan women, have tried to do anything for our community, for our country, we’re constantly, you know, attacked by our enemies, be them the Taliban or extremely conservative religious communities present within the government of Afghanistan, as puppets of American policies or puppets of feminist organizations. And I’m tired of that, because I don’t think I’m working for any particular Western organization or Western ideology. It is merely to work to improve and enhance the livelihood of Afghan women in my country. So the military has not helped me, but I do agree, to a great extent, that—you know, that there needs to be a difference between military presence and, you know, Western diplomatic presence. So, while I would like the military to leave, I’m not suggesting that the diplomatic efforts in Afghanistan should discontinue, as well, from the international—

AMY GOODMAN: Rangina, for—we only have a few seconds, but your thoughts on Paula Lerner, the great Boston photographer who spent so much time with you and other women in Kandahar, won an Emmy for her work, who just died last week of breast cancer? Your thoughts?

RANGINA HAMIDI: We need—and thank you for bringing that up, because we need more of Paula Lerners. Even though she’s physically gone, I would urge more Americans to get involved the way Paula did, because Paula connected with the Afghan people—and, of course, there were women, but you can do that with the men, as well—on a level that none of the international military forces that have been there for more than 10 years could connect, because Paula put behind all or any pre-notions of what Afghans are and really just gave her soul to the people by being present on a day-to-day, second-to-second basis and not being judgmental about what Afghans were or how Afghans are. Paula really connected with the people of Afghanistan in a way that I’ve not seen anybody in my nine years of presence in Kandahar.

You know, one short story was that when she was in Kandahar with the women, the women started singing to her with her goodbye—during her goodbye party, and then Paula also sang a song to them in English. They both started crying, without understanding a word of what each was saying to the other, because they connected on a way, through music, which is a very cultural thing, that doesn’t exist in other forms. And so, Paula will always be remembered not only by me, who was a dear and best friend, but by the many hundreds of women and men in Afghanistan who met her. And we need more of Paula Lerners, the American citizens like Paula Lerners, to connect with Afghanistan, and not [inaudible] military.

AMY GOODMAN: Rangina Hamidi, I want to thank you very much for being with us, president of Kandahar Treasure, the first women-run business in Kandahar. We are linking to the interview we did with you when you were in Kandahar two years ago, showing Paula Lerner’s photos. You can go to democracynow.org. Thank you so much. 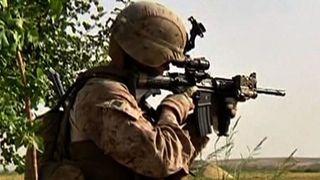 Afghan Massacre Sheds Light on Culture of Mania and Aggression in U.S. Troops in Afghanistan