A grand jury met Wednesday to consider whether charges should be filed in the police shooting of retired Marine Kenneth Chamberlain Sr., who was killed when police, responding to a false alarm from his LifeAid medical-alert pendant, burst into his White Plains apartment, tasered him and shot him dead on November 19, 2011. Lawyers for Chamberlain’s family say newly revealed documents show the White Plains police violated their own taser policy by using the weapon on an elderly person and failing to give verbal warnings. In addition, the lawyers have raised questions about the police account of Chamberlain’s death based on the findings of his autopsy. On what would have been Chamberlain’s 69th birthday, we’re joined by two attorneys for his family, Mayo Bartlett and Abdulwali Muhammad. [includes rush transcript]

JUAN GONZALEZ: A grand jury met for the first time on Wednesday to determine if charges should be filed in the fatal police shooting of the retired Marine Kenneth Chamberlain Sr., who would have turned 69 years old today. Chamberlain was shot dead by police in his White Plains, New York, apartment in November after he accidentally set off a medical alert. Police arrived at Chamberlain’s apartment after being contacted by the LifeAid medical alert service to check on his health. After Chamberlain refused to open his apartment door, saying he was OK, police took the door off its hinges. Officers first shot him with a taser, then a beanbag shotgun, and then with live ammunition.

Lawyers for the Chamberlain family now say police violated the White Plains Police Department’s own regulations when they shot him with the taser gun. According to those regulations, tasers should not be used on, quote, “obviously elderly subjects.” In addition, the regulations say police are supposed to give a, quote, “clear verbal warning” prior to firing the taser gun. According to the Chamberlain family and legal team, no such verbal warning was issued.

AMY GOODMAN: In addition, the attorneys have raised questions about the police account of Chamberlain’s death based on the findings of his autopsy. Police have claimed Chamberlain was holding a butcher knife when a police officer fired two shots, but attorneys say the autopsy suggests Chamberlain was neither facing the police nor holding up a weapon.

We welcome you both to Democracy Now! These reports, the taser instructions—first he’s shot with a taser. Now, we’re making a big deal of this, but then he was shot with live ammunition and killed. This is a heart patient. The LifeAid company calls the police to come, saying, “This isn’t a criminal matter, it’s a medical alert, medical emergency. Please head over.” And then they canceled their call, but the police went forward anyway. Mayo, talk about the taser.

MAYO BARTLETT: Absolutely. Yeah, the taser is just one more step that shows that the police disregarded their own policies, or else that they weren’t aware of what their policies were. And the taser specifically—the policy, as we understand it, specifically prevents them from using it against obviously elderly people. We’ve actually had some discussions with members of law enforcement with respect to whether Mr. Chamberlain was an elderly person. And at the time, he’s 68 years old. He’s a retired veteran, six years in the United States Marines, 20-year retired corrections officer. And I would suggest that anybody that’s 68 years old fits the criteria of being elderly, as much as we may not want to admit that as we get older. But the fact that they disregarded this is very significant. And the reason they have these protocols is because they’re aware that the taser is a very dangerous device, and if you’re using that on an elderly person, you greatly increase the risk of tremendous injury, if not death, on that person.

AMY GOODMAN: And a heart patient.

JUAN GONZALEZ: And the regulations also talk about the warning, that you’ve got to give a verbal warning beforehand that you’re about to taser a person, because, the regulations say, often the warning alone is enough to get a person back under control. But you know for sure, because you’ve looked at the video and the audio that was on that taser, that no such warning was issued.

MAYO BARTLETT: Not only was no such warning issued, but there were no warnings or no commands issued at all. No one stated to Mr. Chamberlain that he should put his hands up, that he should do anything. There were no police commands whatsoever. And even more telling is that the video shows that Mr. Chamberlain was not advancing toward police at that time. He’s standing with his hands at his side. He didn’t say a word, and the police didn’t say a word. They immediately charged the taser and fired it at him, as soon as the door was off the hinges.

AMY GOODMAN: And just to be clear, this video was mounted on the taser gun, which is why you were able to view this at the DA’s office, and you heard the whole thing—

AMY GOODMAN: —through the audiotape of the LifeAid company, the medical pendant company, that has a little box in his apartment so they can hear what goes on in the apartment, and they recorded everything, even after the police said they were turning off the taser gun video.

ABDULWALI MUHAMMAD: My sense is that he was shot from the side. The bullet entered his right arm and traveled across like this.

AMY GOODMAN: Across his chest.

ABDULWALI MUHAMMAD: Across his chest. And that’s what ended—

JUAN GONZALEZ: And it punctured both lungs.

ABDULWALI MUHAMMAD: That is correct. And that’s what ended his life.

JUAN GONZALEZ: But the issue of whether he was actually facing police at the time of the shooting—I talked to a Dr. Michael Baden, the former New York City medical examiner and forensic pathologist, who said, yes, that appears to be that he was shot from the side; however, he says, there’s always the possibility that as an officer began to raise their gun, that he might have turned to the side to make less of a target, and—but that, clearly, there’s at least a greater likelihood that he was not advancing on police, from the trajectory of the bullet.

AMY GOODMAN: Because that’s all he was wearing.

ABDULWALI MUHAMMAD: That’s all the man was wearing.

ABDULWALI MUHAMMAD: That is correct.

AMY GOODMAN: In light of the Trayvon Martin special prosecutor handing down second-degree murder charges against the shooter, in this case, well, Juan discovered the name of the police officer, Anthony Carelli. He is—his case is going on trial in just a few weeks, against two other men, for beating them and calling them “rag head.” Their parents are Jordanian immigrants. In this case, Mayo Bartlett, you heard a racial epithet hurled at Kenneth Chamberlain on the audiotape.

MAYO BARTLETT: Absolutely. The audiotape was crystal clear to me, that you can hear an individual in the background stating, when Mr. Chamberlain said, “Sir, please leave me alone. I’m a 68-year-old heart patient. I’m an old man. Please leave me alone,” and we believe that an officer at that point says, “We don’t give an F—-,” and calls—and then they call him the N-word. Now, we’ve been advised that the officer who used the racial epithet is not Officer Carelli, but normally—

AMY GOODMAN: Who shot him.

MAYO BARTLETT: Who shot him and killed him. But it begs the question, well, who is this officer, and why don’t we know this person’s name? That should all be made public. It should not be a hide-and-seek adventure here, where if we’re fortunate enough to have reporting that uncovers who that officer is, that they will confirm who the officer is.

JUAN GONZALEZ: Now, I’ve also been told by Carelli’s lawyer that he will testify at the grand jury, which is, to me, is unusual in these cases, because usually if you’re the target, a potential target, of a grand jury investigation, you don’t testify and incriminate yourself. So that must mean that either he’s decided to waive immunity, most likely, in order to testify before the grand jury and give his side of what happened.

MAYO BARTLETT: That’s a good possibility, that he’s waiving immunity. I can’t confirm what has occurred here, because that would just simply be between Mr. Quinn and Mr. Carelli. But that is, in all likelihood, what occurred.

AMY GOODMAN: And the significance of this grand jury in light of the Trayvon Martin case? I mean, it’s taken five months, a lot of outcry against Westchester County DA Janet DiFiore. Why wasn’t this case investigated at the time of the killing of this ex-Marine?

MAYO BARTLETT: Well, I want to be clear that we did have conversations with this district attorney’s office very early on, and we were assured, even as early as November, that they were going to present the matter to the grand jury. And in fairness, we want to make that that’s clear. And they’ve done that. And we were advised back in November that they may make the presentation in March. And we have been in touch with them, and they did advise us that it was going to take a little bit longer. But the bigger question that I have is, the fact that most cases are not initiated in a grand jury, so any of my—

MAYO BARTLETT: Any of my criminal defendants who commit a charge get charged by a felony complaint, just as Mr. Zimmerman was in Florida. And that could have occurred here, as well.

AMY GOODMAN: We’re going to leave it there, but we’ll continue to follow the grand jury on the case of the killing of Kenneth Chamberlain. Thank you, Mayo Bartlett— 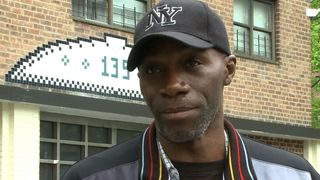