We get reaction from residents of the White Plains public housing complex where Kenneth Chamberlain Sr. lived to the news that the police officers who killed him in his own apartment will not be indicted. In the early hours of November 19, 2011, officers tasered Chamberlain and then shot him after they were called to his house when he mistakenly set off his LifeAid medical alert pendant. “Those cops that did this were wrong,” says neighbor Dennis Grant. “[They] need to step up and be accountable for what [they] did. … You can’t kill us like this — white, black, whoever. You can’t kill us and get away with it.” [includes rush transcript]

AMY GOODMAN: On Thursday, the Democracy Now! team headed up to White Plains. Democracy Now! producer Mike Burke spoke to some of the residents from the public housing complex where Kenneth Chamberlain Sr. lived.

DINA JOHNSON: My name is Dina Johnson. I live here at 135. I was in the—I was woken up by the banging of his—you know, the cops was banging on his window, and it woke me up. And I went to the window, and I saw the police and the firetrucks out here. And they were saying, “Open the door. Open the door.” And he said, “I’m all right.” And basically they went back and forth with it until they said they was going to break down the door. And that’s when they broke down the door.

And they began all this ruckus by just shooting and everything. You know, it happened so fast, I didn’t think it was going to—I think—I thought it was going to—when they broke down the door, I just thought they were just going to tame him or something. I don’t know. But it just went from one—from one to high, you know, from one scale to the shooting.

You know, so it was just very disturbing that morning. So, you know, I was very shocked. I didn’t—I don’t think they really truly investigated like they should have. And, you know, it’s like it’s OK for the police to come and violate somebody and kill him. And, you know, justice hasn’t really been served yet, because of that situation.

ROWLAND HUDSON: My name is Rowland Hudson. I live in this building right here, 135 South Lexington, White Plains. I knew the gentleman who was killed. I didn’t know what happened, 'til I came out and police said what happened. And from what I understand today, that they're not going to charge the officer. And I kind of knew that was going to happen, because of the neighborhood that we live in. I mean, you have police doing racial slurs now. I mean, when I came up, we had police officers who also grew up around here, who knew the neighborhood. I mean, you have—if you’re going to be here and you’re going to patrol the place, at least get to know the people who live in the area. This way, you know more what’s going on, instead of just coming up and shooting a person. I mean, to me, it was just for no reason. But I mean, I expected this to happen. It’s not surprising to me. I mean, I’ve lived here practically all my life, so I’ve seen the ins and the outs, the goods and the bads. So—and this is definitely one of the worst. And it’s a shame. It’s just a shame.

MIKE BURKE: And as a longtime resident, could you talk a little bit about Kenneth Chamberlain Sr.?

ROWLAND HUDSON: He was a quiet person. I mean, I knew him. I’ve seen him coming in and out. I mean, other people had things, bad things, to say about him. I never seen anything like that. I’ve seen him coming out, taking care of his business. He had a car. He got in his car, did what he had to do, came back home. He was quiet to me. I mean, I’ve known him—he’s lived here for a while. I mean, he’s never bothered anyone, far as I knew. He had a life alert. That should tell the story. The man had a life alert. He fought—he fought for us, you know. I mean, what can you say? It’s a shame. I keep saying that, because what else more can we say? That it’s a shame, and we can just hope that it doesn’t happen again.

ZABINI CHEVALIER: My name is Zabini Chevalier. I’m 14, and I live in this very same building right here. And the crime that was happened, like, when the police shot the old man that had the knife, I think it’s tragic, because if you have so many police and they’re supposed to learn how to restrain people, they’re not supposed to just shoot the gun first, especially if it’s an elderly.

MIKE BURKE: Do you feel like you have take special precautions when you’re in the street because of the cops?

ZABINI CHEVALIER: Well, sometimes I have to take special precautions, because sometimes the way I dress or, like, I’m in public and friends are loud, they’ll probably ask me what I’m doing, and I’m not up to nothing. But you might have like a kid of like the white color, and he’s walking around doing drugs, drinking, but they don’t ask him how he is.

MIKE BURKE: And what have people that live here been saying about the shooting of Kenneth Chamberlain and the police action?

ZABINI CHEVALIER: Well, my family, they want to move out of here. They don’t want to stay here anymore. It’s just sad, because if we can’t live in a building or this place right here, our community, and we can’t be safe, it’s just sad.

AMY GOODMAN: Those are some of the voices of the residents of the public housing project in White Plains outside the building where Kenneth Chamberlain lived. Your response, Mayo Bartlett?

MAYO BARTLETT: I think that they sum it up. They feel that they’re under siege. And this is not in response to a crime. This is their daily life, coming and going from the grocery store and sleeping in your home and having fear of the police, instead of respecting them as people who are there to help you.

AMY GOODMAN: Just to be clear, Kenneth Chamberlain lived right there on the first floor, a stone’s throw from both the courthouse and the police station.

MAYO BARTLETT: We’re calling for a federal investigation. And I think that there’s a pattern that’s clear with the White Plains Police Department that requires them to have a federal oversight. So we would like to have that, and we’d like to still have a criminal prosecution concerning the officers who’ve been involved.

AMY GOODMAN: And the DA, DiFiore, says she wants to be a part of that federal probe?

MAYO BARTLETT: Well, it’s clear that she was given an opportunity to be a part of that, and Commissioner Chong now vows that he is going to investigate. But when we met with him in November, he told us that that process had already begun. Apparently, that was inaccurate.

JUAN GONZÁLEZ: And the police have also said that they’re going to begin a top-down review of how they respond to situations with emotionally disturbed persons in the future, right? That’s the part of the reform that they claim was going to come out of this.

MAYO BARTLETT: Well, if the police had followed their own procedures that currently exist, none of this would have happened. And those procedures could be changed, but you can’t trust what they’re saying, and they’ve proven that. Just simply the fact that we’ve gone from a hatchet down to a butter knife tells us all we need to really know.

AMY GOODMAN: Will you be suing the White Plains police?

MAYO BARTLETT: Yes, we will be.

This is Democracy Now!, democracynow.org, The War and Peace Report. Again, you can go to our website. If you were unable to hear some of the interactions, you can read the transcript, you can listen, you can watch the taser video at democracynow.org. This is Democracy Now! We’ll be back in a minute. We’ll be speaking with Pulitzer Prize-winning journalist Steve Coll about his new book, Private Empire: ExxonMobil and American Power. Stay with us. 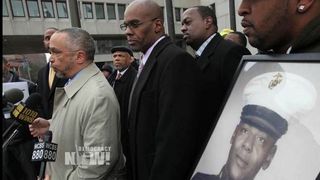