Exclusive: Mumia Abu-Jamal and Danny Glover Speak to Each Other for First Time Ever on Democracy Now

Actor and activist Danny Glover speaks to Mumia Abu-Jamal for the first time after championing the jailed former Black Panther’s cause for over two decades. “I just want to tell you that — and I’m really emotional because I didn’t expect to hear your voice this morning — that we continue to struggle and will continue to struggle to fight for your release. … We love you, brother,” Glover tells Abu-Jamal. “I am as pleased as punch and thrilled to hear you there,” Abu-Jamal responds. On Occupy Wall Street, Abu-Jamal calls the protests “one of the greatest advances in the democracy movement in our modern period,” but one that is only in its nascent stages. “They have something more important to do, and that’s to connect with other people’s movements around the country and build a kind of resistance that can transform this country.” [includes rush transcript]

MUMIA ABU-JAMAL: Yes, Brother Danny. How are you?

DANNY GLOVER: How are you doing, brother?

DANNY GLOVER: It’s good to hear you, as always. And I certainly would be—feel a lot better, be a lot better, if you were out of jail, not simply just off of death row.

MUMIA ABU-JAMAL: Me and you both.

DANNY GLOVER: But certainly, I just want to tell you that—and I’m really emotional because I didn’t expect to hear your voice this morning—that we continue to struggle and will continue to struggle to fight for your release. We sent a letter to the attorney general, Holder, that we convene a meeting and the federal government use its own authority to investigate your case. And certainly, we—people are out here, and we love you, brother.

AMY GOODMAN: Mumia, I think it’s interesting that you are talking to Danny Glover, who is currently playing Thurgood Marshall—that’s going to be coming out in an HBO series on Muhammad Ali—the Supreme Court justice.

MUMIA ABU-JAMAL: I think—I think Thurgood himself would get a real chuckle out of that. That’s wonderful. I mean, so—

MUMIA ABU-JAMAL: We shall make that happen.

DANNY GLOVER: We will make that happen, OK. All right.

AMY GOODMAN: Mumia Abu-Jamal, your access, outside of death row right now, to people, to the media, to the phone? You have had so much trouble reaching out over the years, though you have managed.

MUMIA ABU-JAMAL: Well, if you recall, it’s been—it’s maybe 15 years, I think, since I last called your show. I was in conversation with you, perhaps 1996 or thereabouts, and the phone went dead. And I looked out of my cell, and I saw a guard come up and literally pull the wire out of the wall that connected the phone. And I remember saying, “Hello? Hello? Hello? Hello?” And it was dead because there was no wire to connect us. So, as you can see, the wires are a little tighter now. But—

AMY GOODMAN: Well, you sued—you sued the Pennsylvania prison authorities over them pulling out the phone from the wall when we were speaking on Democracy Now!

MUMIA ABU-JAMAL: Indeed, I did. And thanks to the efforts of some really brave and conscientious lawyers and judges, I won—at least most of the issues in that suit. Abu-Jamal v. Price I think was the name of the case.

OPERATOR: This call is from the State Correctional Institution at Mahanoy and is subject to monitoring and recording.

MUMIA ABU-JAMAL: And thanks to that case, I was able to write and continue to, you know, be in contact with our people. So, I’m real glad he pulled that wire out the wall. That was very helpful.

AMY GOODMAN: Danny Glover, what do you think Thurgood Marshall would do in the case of Mumia Abu-Jamal?

DANNY GLOVER: Well, surprisingly—no, not surprisingly, I think Thurgood Marshall would have been one of the few justices who would perhaps hear the case, would argue to hear the case, even though there were moments during the civil rights movement that Thurgood Marshall had even trouble with Martin Luther King and disagreed a great deal. But I think—I feel that he would be one who would want to hear the case. Thurgood Marshall—for nothing else, during those dark years in the ’30s and ’40s, Thurgood Marshall was there, before Brown v. Board of Education, fighting cases all the time of men who on death row who were about to have—for murder or for rape, all over the South, you know. We often know Thurgood Marshall from his work on Brown v. Board of Education, but clearly his work around inmates, around prisoners, around those who have been accused, accused falsely, and fighting for them was something he did all over the country.

AMY GOODMAN: I’m afraid we’re going to lose Mumia Abu-Jamal in a moment. Mumia Abu-Jamal, your thoughts on what Danny Glover just said about the Supreme Court justice, Thurgood Marshall, and also if you could comment on the Trayvon Martin case and the Occupy movement?

MUMIA ABU-JAMAL: Well, I would concur largely with, not surprisingly, Danny Glover’s remarks, because, you know, from what I’ve read and what I’ve heard, Justice Thurgood Marshall was not just a brilliant legal mind and not just a brilliant judge or jurist, he was an incredible lawyer who fought for people who were poor, who were dispossessed, who were powerless, in the apartheid South. And also because he was a black lawyer, his experiences in the South were such that not only were his clients endangered, but he himself was endangered. And many times he would be told that he had to leave town before nightfall, or he would face death. I mean, this was the American South in the middle 20th century.

The good thing about that, if there can be a good thing about such an experience, is that when he came to the Supreme Court, those experiences of being a defense lawyer of the poor and the dispossessed and those facing death, he was able to share with his fellow justices, because these were people, largely, who, let’s say, came from a completely different background. And I don’t mean racially; I mean class, and I also mean that many of them—most of them were not defense lawyers. They were either lower court judges, or some were legislators, and, you know, mostly they were prosecutors and so forth. So, he was able to expand their perspective of what the law really meant in the real world and—through his own life experiences. Now, I think he had a profound impact, if you really check it, on the former Supreme Court Justice Sandra Day O’Connor. If you look at her early jurisprudence and then look at her later jurisprudence, I think it’s a direct effect of the influence of Thurgood Marshall.

As for Trayvon, the little boy who could have been the son of the President of the United States, when we look at what happened in that case, and in my—my real view is that, in a matter of weeks or months, or months, we may see an immunity hearing that will wipe out the charges completely, and Mr. Zimmerman will never see the inside of a prison.

As for the Occupy movement, I think it’s one of the greatest advances in the democracy movement in our modern period. And it’s pushed because of the economic crisis—

OPERATOR: You have 60 seconds remaining.

MUMIA ABU-JAMAL: It’s pushed because of the economic crisis that’s facing the United States and especially young people who have come out of college and have no hope for a job, have no hope for a future, have no hope for a life without terrifying, crippling loans over their heads. I think they did something wonderful, but it’s a first step. They have something else to do, something more important to do, and that’s to connect with other people’s movements around the country and—

OPERATOR: You have 30 seconds remaining.

MUMIA ABU-JAMAL: —and build a kind of resistance that can transform this country. I thank you all for these brief moments. I really do. Thank you very much.

MUMIA ABU-JAMAL: All the best. On a move.

AMY GOODMAN: Mumia Abu-Jamal, speaking to us from SCI Mahanoy, the prison in Pennsylvania where he is no longer on death row. Are you still there, Mumia? His phone has been cut off at this point. Danny Glover, your thoughts right now as you sit down and hear Mumia Abu-Jamal speaking to you, no longer from death row?

DANNY GLOVER: Well, it’s a beginning, as he says. As he mentioned in terms of the Occupy movement, it’s a beginning. We have to find, by—as someone would say, by any means necessary, legally, to free—and collectively, as a community, not only in this country, but around the world, to free and to bring him home.

NERMEEN SHAIKH: Danny Glover, your thoughts on Trayvon Martin and Mumia Abu-Jamal? We’ve just spoken to. Is the criminal justice system very different now than it was when Mumia Abu-Jamal was convicted?

DANNY GLOVER: Certainly, it’s framed now in a different way. It is simply still the place. I know those places, and I visit those places Mumia talks about, where there is a wheelchair caravan of men who are serving life sentences. You take, for instance, Soledad State Prison in California. Forty percent of the prisoners there are on death—excuse me, on life sentences. And you take Vacaville, two places that I visited last year. Also 40 percent of the prisoners are life—lifers, as they’ve been calling them, lifers. So, the reality is that that has not changed. The course, from prisons to—from high school to communities to prison, is still the same course that has happened.

What is essentially—and we must be reminded that at the point that Mumia was charged with this crime—and certainly, there were a number of activities, the COINTEL program and other programs, to incite and not only to dismantle those movements and to dissuade young people from becoming progressive and radicalized in different ways within the community. So, here’s a journalist. And that’s what Mumia is first—

DANNY GLOVER: —is a journalist.

AMY GOODMAN: And then we’ll continue off air.

DANNY GLOVER: He’s the person who is attacked—a journalist now, first—who’s attacked in here because of what he has to say.

AMY GOODMAN: Danny Glover, we want to thank you very much for being with us. We’re going to continue this conversation and post it online in a web exclusive at democracynow.org.

VIDEO: “Sex, Race and Class” — Extended Interview with Selma James on Her Six Decades of Activism 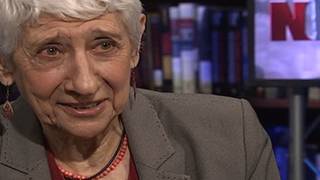 VIDEO: “Sex, Race and Class” — Extended Interview with Selma James on Her Six Decades of Activism