As we recently reported, Tuareg rebels in the West African nation of Mali have declared the independent state of Azawad after seizing Timbuktu and other major cities in the north. Renowned Malian musician Khaira Arby was was born and raised in Timbuktu, where she studied under the legendary guitarist and singer Ali Farka Touré. Her 2010 album Timbuktu Tarab received international acclaim for her strong vocals and lyrics exploring spiritual and sociopolitical issues in Mali. In September of 2010, Arby performed live in the Democracy Now! studio, where she spoke with Amy Goodman about the struggles of female musicians in Mali and the potential impact of music in times of conflict. Arby, often called the “Nightingale of the North,” begins a tour in the United States later this month.

I started to become a singer because I loved singing. And I continue to sing. I am a slave to my work. A woman needs to do something, if she wants to have something. I loved music, and so I chose music. I did face obstacles, beginning with my parents, who did not approve of my singing. When I hear of war, I sing so that the war may cease, because in the case of war it is women who suffer. Therefore, it is better for us women to sing against war and conflict between men and between countries. 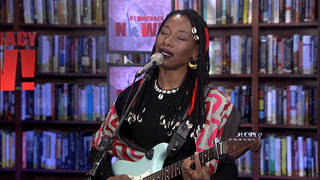