The Justice Department has sued Arizona Sheriff Joe Arpaio and his deputies in Maricopa County for racially profiling Latino residents in the Phoenix area. The DOJ contends that Arpaio and his deputies aggressively targeted Latinos, regardless of their immigration status, and retaliated against anyone who got in their way. We go to Phoenix to speak with Randy Parraz, president of Citizens for a Better Arizona. “We believe, finally, we’re going to have an airing of what’s taken place,” Parraz says. “We applaud the federal government and the Department of Justice for coming in and holding Sheriff Arpaio accountable, because local law enforcement officials here … are unwilling to do that work.” [includes rush transcript]

JUAN GONZÁLEZ: We begin today’s show in Arizona. On Thursday, the Justice Department sued Arizona Sheriff Joe Arpaio and his deputies in Maricopa County for racially profiling Latino residents in the Phoenix area. The Justice Department filed a lawsuit only once before in the 18-year history of its police reform work.

The 32-page complaint contends that Arpaio and his deputies aggressively targeted Latinos regardless of their immigration status and retaliated against anyone who got in their way. According to the complaint, Latinos at the county jail were often referred to as “wetbacks” and other ethnic slurs. The complaint also alleges Latino drivers were five to nine times more likely than their non-Latino counterparts to be stopped or searched.

ASSISTANT ATTORNEY GENERAL THOMAS PEREZ: The police are supposed to protect and serve our communities, not divide them. At its core, this is an abuse-of-power case involving a sheriff and a sheriff’s office that disregarded the Constitution, ignored sound police practices, compromised public safety, and did not hesitate to retaliate against perceived critics. Constitutional policing and effective policing go hand in hand. Our complaint alleges the defendants’ actions were neither constitutional nor effective.

AMY GOODMAN: Sheriff Joe Arpaio vowed to fight the lawsuit. He said he’ll defend himself to help other sheriffs avoid finding themselves in similar situations.

SHERIFF JOE ARPAIO: We’re just doing our job, enforcing the illegal immigration laws. We are not racist. We do not racial-profile. There’s no systemic proof of that. And quite frankly, I’m very happy that we are being sued, because now we will make them put up everything they’ve been accusing me and my office of. The bottom line here, as my attorneys mentioned, I am not going to surrender my office to the federal government. I will fight this to the bitter end.

JUAN GONZÁLEZ: Supporters of Sheriff Joe Arpaio maintain that the federal government has failed to police the southwestern border, leading to an influx of undocumented immigrants who have allegedly drained social services and created other problems. Sheriff Joe Arpaio has also told reporters in Phoenix, quote, “They’re using me for the Latino vote, showing that they’re doing something, taking on the sheriff over an alleged racial profiling.”

AMY GOODMAN: A Department of Justice probe last year accused Arpaio of targeting Latino residents, illegally detaining them, then denying them basic rights behind bars. Settlement talks between Arpaio and federal officials broke down last month over Arpaio’s resistance to allowing an independent monitor of his department.

For more, we’re going to Phoenix, Arizona, where we’re joined by Randy Parraz, a longtime critic of Sheriff Arpaio, president of Citizens for a Better Arizona, the group that led a successful recall effort against Arizona State Senator Russell Pearce, the leading lawmaker behind Arizona’s anti-immigrant law, SB 1070.

Randy Parraz, welcome to Democracy Now! Talk about the significance of this case.

Yes, I think it’s very important, because now the case has moved forward, and there’s an actual lawsuit. Sheriff Arpaio, with his recent release of a reform document, is actually admitting that there’s problems there. Now, he’s been in denial for quite some time. You know, he thinks this is a fight or some type of war against the federal government. You know, this is not United Counties of Arizona; we are in the United States of America. The federal government, under the Department of Justice, an investigation began under the George Bush administration, that continued. These are seasoned professionals in the civil rights department who are doing their job. And so, it’s unfortunate that Sheriff Arpaio chooses to whip up, you know, his political machine, instead of come to the table and just deal with these issues.

I was someone who was targeted by sheriff deputies and arrested back in 2008 for speaking out against Sheriff Arpaio. These are real instances. There are other U.S. citizens who have been stopped, detained and arrested. These are real instances. Sheriff Arpaio is in La-La Land. He is a relic from the past, and he needs to come to terms with his behavior that he’s actually created and the culture of corruption he’s created there in the sheriff’s department.

RANDY PARRAZ: Yes. I mean, it’s just a culture that was created there where they thought it was OK as being sheriff deputies, high-ranking commanders, supervisors, when you have things going around referring to Mexicans as “Mexican bitches,” using cartoons and talking about—you know, showing a drunk Mexican on a bench, you know, saying that that’s their form of yoga. I mean, there was just, time after time, different instances where they felt comfortable, you know, vilifying, making fun of a community of people who are Latinos, based on the culture that Sheriff Arpaio has created there.

And so, we believe, finally, we’re going to have an airing of what’s taken place. You know, we applaud the federal government and the Department of Justice for coming in and holding Sheriff Arpaio accountable, because local law enforcement officials here, whether it’s the county attorney, Bill Montgomery, or it’s the state attorney general, Tom Horne, are unwilling to do that work. We just recently had—you know, yesterday marked the day that former County Attorney Thomas, Andrew Thomas, was officially disbarred for his behavior, for what he did here in Maricopa County, and he was also in partnership with Sheriff Arpaio. So Sheriff Arpaio’s former chief deputy, David Hendershott: fired. You know, former County Attorney Andrew Thomas: disbarred. You know, Russell Pearce: recalled. And now you have Sheriff Arpaio, like the only remaining pillar of that triangle of corruption, that remains.

JUAN GONZÁLEZ: But Randy, this also—this lawsuit—or this complaint now also sort of sets the Justice Department, in some way, up against the Department of Homeland Security, because Janet Napolitano, who is from Arizona, has never really called out Joe Arpaio on any of the—of his activities or any of his practices.

RANDY PARRAZ: I think, absolutely. I think Janet Napolitano at one point actually sought Sheriff Arpaio’s endorsement when she ran for governor, so I think you’re touching on some really interesting points there in terms of, you know, who’s really going to lead this effort and who’s willing to speak out and really hold these folks accountable. I think you have this investigation, which we—especially folks who live here under this corrupt, you know, regime, this reign of terror, and it’s real. They talk about wall of distrust that exists between the sheriff’s department and the Latino community, and that’s very real.

RANDY PARRAZ: So, I don’t think—yes.

AMY GOODMAN: I also wanted to ask you about recent reports that Maricopa County Sheriff Joe Arpaio publicly mocked federal authorities probing his office for racially profiling of Latinos at a fundraiser for an anti-immigration group in Texas in 2009. Arpaio said, quote, “After they went after me, we arrested 500 more just for spite.” Can you talk about this report, Randy Parraz?

RANDY PARRAZ: Yeah. Once again, it just shows that Sheriff Arpaio is more concerned about his own political image. He sees, you know, whether it’s Latino immigrants, as pawns in his own political game. There was a time here when Sheriff Arpaio—I think it was in 2006—was on record saying, “I’m not concerned about those immigrants or those folks who are here, you know, selling elote, corn vendors, those types of folks. I want to go after real criminals, those smugglers, those folks who are bringing drugs in.” And then that changed in 2006, 2007, when he thought it was in his political interest to get on the bandwagon and do immigrant bashing and going after those immigrants and playing that card.

And so, now I think he’s overplayed it. I think now people are fatigued about this whole notion, where he has, you know, illegally misspent over $100 million. There’s been—there’s over 400 uninvestigated sex crimes that took place under his watch. He’s moved a tremendous amount of our resources and put it under other priority by going after, you know, immigrants. And so, I think, you know, we’re at a point now where this is all going to come to a head, because his election now is up in November. And so, whether, you know, we see it—we get justice in the courtroom for the civil action being brought by the Department of Justice or get justice at the ballot box, this is all going to come down this year. So it’s going to be a very exciting year for trying to get Arizona back on the right direction for progress here in Arizona.

AMY GOODMAN: Randy Parraz, I want to thank you very much for being with us, president of Citizens for a Better Arizona. The group led a successful recall effort against State Senator Russell Pearce, the leading lawmaker behind the anti-immigrant bill, SB 1070. Now, well, it’s the U.S. Justice Department that’s taking on the sheriff, U.S.A. v. Sheriff Joe Arpaio.

This is Democracy Now!, democracynow.org, The War and Peace Report. When we come back, a major indigenous gathering is happening at the United Nations, and we’ll be speaking with a U.N. rapporteur who is calling for the U.S. to return the Black Hills, home of Mount Rushmore, to indigenous people of the United States. Stay with us. 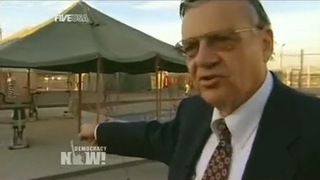