The U.S. Drug Enforcement Agency has confirmed its agents were on board a U.S.-owned helicopter with Honduran police officers when four people were shot and killed on a boat earlier this week. Two of the victims were said to be pregnant women. The deadly incident has highlighted the centrality of Honduras in the U.S.-backed drug war. Honduras is the hub for the U.S. military operations in Latin America, hosting at least three U.S. bases. We speak to Dana Frank, a professor of history at the University of California, Santa Cruz. [includes rush transcript]

JUAN GONZALEZ: We turn now to Honduras. The U.S. Drug Enforcement Agency has confirmed its agents were on board a U.S.-owned helicopter with Honduran police officers when four people were shot and killed on a boat earlier this week. Two of the victims were said to be pregnant women. Officials from both countries say Honduran officials carried out the shooting after the helicopter was shot at first. This is State Department spokesperson Victoria Nuland at a press briefing Thursday.

VICTORIA NULAND: In this particular operation on May 11th, the U.S. DEA was involved only in a supporting role. We did not use force. No U.S. personnel fired any weapons. We were involved purely supporting and advising. The units that we support are comprised primarily of host country—in this case, Honduran—law enforcement officers. They were trained, they were vetted, as part of this program we work on together.

REPORTER: Well, does that mean that they advised them to open fire on a canoe carrying civilians with a pregnant woman and—

REPORTER: Well, I don’t understand. You said they were in an advice and support role. So what did they advise and support? Did they tell—

REPORTER: Did they say, “Hey, this looks like a good target. Shoot it”?

VICTORIA NULAND: Well, first of all, as I understand it, the Honduran authorities are taking—are doing a broad investigation of this incident to evaluate what exactly happened and how it happened. So I think we need to let that go forward. With regard to the precise actions in an advisory role that the U.S. folks played, I can’t speak to that.

The victims were reportedly suspected of carrying drugs, but local officials say they were innocent fishermen. On Wednesday, Honduran protesters in the Indian Mosquito Coast area responded to the killings by burning government offices and demanding a departure of U.S. agents.

AMY GOODMAN: The deadly incident has highlighted the centrality of Honduras in U.S.-backed efforts to militarize Latin America in the drug war. Honduras is the hub for the U.S. military operations in Latin American, hosting at least three military bases. One of the bases formerly housed U.S. officials in the ’80s when they ran their operation to overthrow the Sandinista government in neighboring Nicaragua. Overall, the U.S. military has deployed at least 600 troops across Latin America.

To discuss what’s happening in Honduras, we’re joined from Washington, D.C., by Dana Frank. She’s professor of history at the University of California, Santa Cruz, author of many books, including Bananeras: Women Transforming the Banana Unions of Latin America, which examines the banana workers’ unions of Honduras.

Talk about what has happened, and particularly let’s start with this killing of four Hondurans, Dana Frank.

Well, this is one of these situations when “who are you going to believe?” And as a historian, I would have to start by underscoring that we have to be very careful about believing what the State Department is saying at this point. They have admitted that there were—there were four helicopters and that two of them were—two of them were State Department helicopters and that there were Guatemalan military on board, as well. So it’s obviously getting even more complicated.

According to the Mosquito people on the ground and the local mayor and the Congress person, that the U.S. forces—they descended from the helicopters after they had allegedly been shot upon by alleged drug traffickers in a different boat. They mistook—according to people on the ground, they mistook that boat for the boat with the civilians and started shooting at the civilians, killing at least four people—by some accounts, five—including at least one pregnant woman and, by some accounts, children. Another woman was also shot at and lost limbs as a result, and a boy was shot in the arm from behind. So these are U.S.—U.S. troops were clearly on the helicopters, but local people say the U.S. troops were doing part of the shooting.

And so—and meanwhile, the Honduran government—I do want to underscore, the week before, the day after it happened, they reported that it was drug traffickers that had been killed. And only after the civilians came forward very bravely and said, “Wait a minute, we’re not drug traffickers, we’re local people—in fact, terrified of the drug traffickers,” and only thanks to AP, do we even have it crossing over into the U.S. press that there was U.S. DEA agent involvement in the helicopters and on the ground.

JUAN GONZALEZ: Well, Dana Frank, Honduras is the second poorest country in the Western Hemisphere after Haiti. How do you—now suddenly we’re being told that it has become the major transshipment point for drugs into Mexico and the United States. This is a recent phenomenon. Could you talk about this, what’s happening with the drug war in Honduras, in the context of the political troubles and the coup that occurred in Honduras a few years back?

DANA FRANK: Well, you know, there’s been drug trafficking in Honduras for a long, long time, but it was the 2009 coup—we’re coming up on the third anniversary on June 28th—it was the 2009 coup that opened the door for this kind of massive drug trafficking. You know, and it’s really important to know that the drug trafficking is interlaced with the post-coup government of Porfirio “Pepe” Lobo, from top to bottom. Even the Minister of Defense has talked about the so-called narco Congress people, the narco judges. It’s a totally corrupt regime from top to bottom. The police regularly kill people, and they have admitted that themselves. At least 300 people have been killed by state security forces since the Lobo came into office a little over two years ago. And none of these people have been prosecuted. There are at least 10,000 denunciations of human rights abuses by state security forces, and that even the government itself admits that no one has been prosecuted for that.

So this incident is happening in the context of U.S. ongoing support and even celebration of that regime, and welcoming Lobo to the White House as recently as two weeks ago. In October, he was certainly in D.C. talking to U.S. government two weeks ago. So, what’s going on is we have this tremendously corrupt government that’s killing its own people, and the U.S. is pouring more and more money into it. As we speak, the U.S. has just recently tried to double a piece, key piece, of the funding for the U.S.-Honduran military and police. And Biden was recently down there promising $107 million more. We’re increasing the funding for the U.S. Air Force base at Soto Cano and making the barracks there permanent for the first time.

AMY GOODMAN: Professor Frank, before we get to the end, because we have less than a minute, I wanted to ask you about the slaying of Alfredo Villatoro, just the latest journalist to have been murdered in Tegucigalpa, his body found nearly a week after he had been kidnapped.

DANA FRANK: Yeah, I just want to say that it’s the drug war that’s being used as a pretext for U.S. support for this regime. Villatoro was found assassinated on Wednesday, his dead body. He was kidnapped a week before, a very prominent radio journalist. And equally important, Erick Martínez, a very prominent LGBT activist, was found dead two days before.

There’s a tremendous rave of escalating repression going on and also very terrifying death threats, very sexualized death threats by a paramilitary group called the CAM, against women human rights defenders in Tegucigalpa. The U.S. embassy has specifically said, “We are not asking the Lobo government to investigate the CAM militaries.” And I queried about that yesterday, and they did not say anything about—they did not deny their original statement saying we’re not asking them to investigate the paramilitaries.

AMY GOODMAN: Very alarming to see these pieces in the Times. On May 5th, “Lessons of Iraq Help U.S. Fight a Drug War in Honduras.” But we’re going to leave that for another day. Professor Dana Frank, we want to thank you for being with us, professor of history at University of California, Santa Cruz.

DANA FRANK: Thanks so much, Amy, for caring. 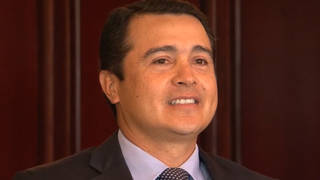