Dozens of anti-NATO protesters have been arrested in Chicago over the past several days, including five men who were jailed on domestic terrorism charges. Three of the men were accused of plotting to attack President Barack Obama’s campaign headquarters, Mayor Rahm Emanuel’s home and other targets. Their lawyers say they were entrapped by government informants. The Chicago police have also been criticized by activist groups for using violent force to break up protests and accused of targeting independent media activists who have been streaming the protests live over the internet. On Saturday night, three helping to livestream video of the protests were detained at gunpoint. [includes rush transcript]

AMY GOODMAN: Dozens of protesters have also been arrested over the past several days, including five men who were jailed on domestic terrorism charges. Three of the men were accused of plotting to attack President Obama’s campaign headquarters, Mayor Rahm Emanuel’s home and other targets. The arrests of the men dominated the news coverage here in Chicago leading up to Sunday’s march. Lawyers for the men say they were entrapped by government informants. Michael Deutsch is an attorney with the National Lawyers Guild.

MICHAEL DEUTSCH: Obviously, we don’t have access to all the information that the state has. But what we do know is, is that there were police—undercover police officers that ingratiated themselves with people who come from out of town. And from our information, these so-called incendiary devices and the plans to attack police stations, attack the mayor’s office, is all coming from the mind of the police informants and are not coming from our clients, who are nonviolent protesters. They are not anarchists. They don’t belong to a Black Bloc organization. They’re involved with nonviolent protest. And what we believe is, is that this is a way to stir up prejudice against the people who are exercising their First Amendment rights.

AMY GOODMAN: The Chicago Police have also been criticized by activist groups for using violent force to break up protests. On Saturday, a police van was videotaped nearly running over a protester. Mark Provost of Occupy Boston and Occupy New Hampshire witnessed the incident.

AMY GOODMAN: What happened to these protesters?

MARK PROVOST: The woman was hospitalized. And the man only escaped unscathed thanks to the fact that he was six-foot-seven.

AMY GOODMAN: So you saw the police van run into this protester. Describe exactly what you saw happen?

MARK PROVOST: What I saw happen was—I was texting as usual, and I basically heard a lot of screaming. I looked up, and 15 feet in front of me, without anybody in between, I saw a van heading right towards me with a man in front of it. Half of his body, his torso and his arms were on the hood, and he was scrambling with his feet. And from what I could tell, the van was going so fast that he couldn’t go to the side, or the wheels would have ran him over.

AMY GOODMAN: On Sunday, police beat back protesters who attempted to march toward McCormick Place, the heavily fortified site of the NATO summit. I talked to one protester who had just lost parts of both of his front teeth after he was hit by a police officer.

PROTESTER: We were pushing that way, and they started knocking people back. A girl fell down, and they continued to beat her on her legs and her body. And they kept saying, “Get back. Get back.” And she was like, “I can’t. I can’t get up.” A man tried to go and pick her up. They hit him on the back of the head. He fell down. He started bleeding. And then I was trying to pick her up. I kind of fell on my knees, and they took a billy club, and they just rammed it right into my teeth.

AMY GOODMAN: What are you going to do about your teeth?

PROTESTER: I don’t have health insurance. I’m going to—there’s a Dearborn clinic that the medics told me about. They gave me a piece of paper. I’m going there and see what can happen. Hopefully, there will be a lawsuit, and I’ll get a bunch of money.

AMY GOODMAN: So were you able to find the pieces of your teeth?

PROTESTER: Yeah, they were in my mouth. I spit them out. They’re in a bottle of water in my backpack now.

AMY GOODMAN: The Chicago police have also been accused of targeting independent media activists who have been streaming the protests live over the internet. On Saturday night, police detained three livestreamers at gunpoint. Luke Rudkowksi of WeAreChange.org described what happened.

LUKE RUDKOWSKI: A large number of police vehicles, undercover vehicles, CPD vehicles, three white-shirt lieutenants pulled up right in front of us, guns were drawn, screaming at us to get our hands up.

LUKE RUDKOWSKI: I immediately took my hands out, but with a cellphone in one hand. I was recording the whole thing on Ustream, with officers coming up to us with guns pointed. And they were screaming, “It’s just a cellphone. Don’t shoot!” They repeated that about five times. They took my cellphone, threw it on the roof, took us out of the car, put us in handcuffs, asked them some—asked us some questions, took down all of our information, started banging our hard drives, our camera equipment, our batteries. I think one of our hard drives may be destroyed from the banging that the officers did to it. I was talking to one of the lieutenants, and he said, “We’re just looking for a vehicle that’s similar to this.” We drive a '99 Lexus with New Mexico plates. I don't think there’s many New Mexico license plates here in Chicago, especially matching that description of that vehicle. And when he said that, he looked down, when I was making eye contact, and started laughing.

MIKE BURKE: But why do you think the police are so threatened by what you do?

LUKE RUDKOWSKI: I have no idea. I mean, what we do is provide a service to the people. We stream live, raw, unedited, for everybody to see and make up their own mind. We’re not—we’re here to document.

AMY GOODMAN: That’s Luke Rudkowski of WeAreChange.org. This is Democracy Now!, democracynow.org, The War and Peace Report. We’re in Chicago. Back in a minute. 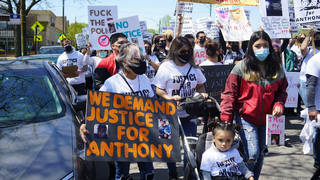