Dick Gregory, 79, took part in Sunday’s march against NYPD’s stop-and-frisk policy in New York City. He criticized police departments across the country for racially profiling persons of color. “It’s happened all the time. It’s just there was never no spotlight on it. And that’s what’s so beautiful about this here,” Gregory said. [includes rush transcript]

AMY GOODMAN: I also talked to longtime civil rights activist and comedian Dick Gregory. I asked him if he was ever stopped and frisked.

DICK GREGORY: Most of the time it was my fault. It was dealing in the civil rights movement. That was altogether a different type of stop, because they had to be on their best behavior then, because there’s too many cameras around.

AMY GOODMAN: What do think of all these young people who are describing, like the young woman next to you who said, or the young man on the other side of you, who said their first stop was when they were 11 years old?

DICK GREGORY: Yeah, it’s happened all the time. It’s just there never was no—there was never no spotlight on it. And that’s what’s so beautiful about this here.

But let me tell you something that’s interesting. Out of the thousands of black cops in America, you never turned on the TV or picked up the newspaper and see where a white family is complaining that some black cop shot their child or mother or father in the head 40 times. Now, you ask the question: are black cops more spiritual than white cops? Are black cops better trained? No, black cops know that white folks ain’t going to tolerate it. That’s why you don’t see that. And when we get to the point that we say we’re not going to tolerate it—now, what will have to happen for black folks to stop tolerating, let cops beat up the black folks’ car. It ain’t no accident you never heard a black person say, “That white racist cop shot my car. There’s something inside of me that wouldn’t tolerate it. I tolerate you my mother, my children, my family, but don’t mess with my car.” And you see that. And when that—and this will help that change. This will help that to come out before there’s an incident and send a message. Or if we was together enough, if we had one Christmas boycott against police brutality, then the white folks that’s not involved in it—the turkey growers, Disneyland, all you media folks—they would come out and stop it. And when they nod their head, it stops.

And this march here just don’t affect New York. You got police departments all over America now that sent people here to watch this. And the other thing, that’s the silent thing, they lose billions of dollars every year settling police brutality cases. And eventually the taxpayers is not going—they’re not going to tolerate it. They’re going to say, “Wait a minute. Stop.” And this is what happened. When you really—all my life, when I’ve seen a siren—nobody ever told me—I pray for them that where they’re going, the people they’re going to, the siren—it’s funny praying for a cop that you don’t know. But maybe when you think about, as a little boy, for Christmas, I never wanted a police car, and I didn’t know nothing about cop brutality. I always wanted a firetruck. And I hope it will come the day that children will want a firetruck and a police car. And then we know it’s over.

DICK GREGORY: I don’t believe in hope. We got in outer space; there wasn’t hope. We made rockets; there wasn’t hope. You bring in the hardcore scientists and shine a light on it and say, “We have to do this.” If I had a brain tumor, I don’t hope it’s going to get out; I’m going to ask you who’s the best brain surgeon here, and I’ll go to him. And that’s what’s going to happen. You shift the mindset of young folks that says, what you’re doing here goes out there [inaudible], this don’t have to happen, that it’s not all right. I come up in a black community when a cop beat up you and your brother, they say, “Well, thank God they didn’t kill you.” That’s no more. That’s no more.

“They’re Invading Me”: Vietnam Veteran John Covington on Being Targeted by Police Stop-and-Frisks

NEXT“They’re Invading Me”: Vietnam Veteran John Covington on Being Targeted by Police Stop-and-Frisks 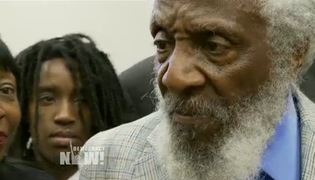