Civil rights activist and comedian Dick Gregory was among the people who filled the 2,000-capacity Jonesville Baptist Church that hosted Troy Davis’s funeral on Saturday in Savannah, Georgia. Afterward, he told Democracy Now! he was starting a year-long hunger strike that night to protest against the death penalty. “I’m going to go not eating no solid food until next fall,” Gregory says. He called on others to pray and meditate that “the truth will come out” in Davis’s conviction for the 1989 killing of off-duty police officer Mark MacPhail—a crime which Davis has always maintained he did not commit. [includes rush transcript]

AMY GOODMAN: After the burial of Troy Davis, the family and hundreds of supporters, families, friends, went to the International Longshoreman’s Hall in Savannah. Among those who had eulogized Troy Davis was civil rights activist, comedian, Dick Gregory. At the Longshoreman’s Hall, I got a chance to talk to him about what he announced in the church, that he’s starting a year-long hunger strike to protest the death penalty.

AMY GOODMAN: So, why did you come down to Savannah, Georgia?

DICK GREGORY: Well, I’m ashamed to live in a country that kill people, the state. I’m ashamed as a Christian—well, though a Christian thing is a different thing. My mama said, “Unless you accept Jesus Christ as your lord and savior, you’re going to get”—Jesus can’t get in here, a Jew, you know? But how can Christians cry over the crucifixion of Christ, and don’t get rid of capital punishment, when the state killed Jesus? The state. He wasn’t mugged to death or run down by some drunken chariot driver. The state killed him. It’s easy to sing some cheap song. “Were you there when they crucified the Lord?” Two thousand years—you wasn’t there then, and most of us wouldn’t be there now. But I’m just—see, I’m not against capital punishment. When I started off fighting against, I had a gun in my house. I’m not against capital punishment because poor folks get it or somebody might be accused wrong. I’m against killing. The state. The state.

See, the one thing that happened with Troy Davis, America was the loser, and China was the winner, because no longer can America talk to China now about human rights, OK? Now there was a time they can do it, but with the fastness of the news, shows like you, all over the world, the Chinese are sitting there saying, “I wish they would come over here again and tell me about it.” It’s like me, as a father, saying to my children, “You can’t get drunk, you can’t spit on the floor, and you can’t smoke dope,” but I do it. See, I’ve lost the moral authority. And that’s what happened with this.

And the reason this case, see—see, many of us forget that Northern Ireland solved their problem by some men willing to fast 'til they died. Hmm? No other reason. It embarrassed Britain so bad all over the world. Bobby Sands—I remember all the stuff I got in my head. Bobby Sands, God, starved to death. And that whole thing and the hatred that existed over there in Northern Ireland was just incredible. And yet, they was able to resolve that when you're willing to make that supreme one. That’s what they just did here. They’ve been able to get away with it, but not the quickness of the news today.

AMY GOODMAN: You said you’re going to start a fast at midnight tonight?

DICK GREGORY: Midnight tonight, until next—well, see, it’s an easy day to remember. They killed him on the equinox, the fall equinox. Now, I don’t believe that’s no accident. On the 21st was the equinox. So I’m going to go not eating no solid food until next fall, and just ask people not to fast, but just to tune in at 12:00 noon, that the truth will come. And let me tell you something about that prayer. The cop’s mother, who’s glad he’s dead, she should join us in prayer, if she’s looking for the truth. We didn’t say prove that he wasn’t guilty. We just said pray and meditate that the truth will come out. That’s powerful. And I’ll tell you what. It won’t be a year. That’s so powerful for that to happen. It will happen.

AMY GOODMAN: On September 21st, 2011, when Troy Davis was executed at the death row prison in Jackson, Georgia, you were at another execution, in Texas.

AMY GOODMAN: Can you talk about why him? Why were you there? Who he was?

DICK GREGORY: I’d have been there if Hitler was there. The state don’t have a right to kill people. Let me tell you, if you and I are in the military, and we’re trying to kill these people and give their country to our country, if they capture us, they can’t snatch our teeth out or give us electric shock treatment. If them barbarians at war have certain laws to war, and America don’t? See, if I kill somebody and they give me life, that’s punishment. When they give me death, that’s revenge. That’s altogether different. And again, I say this. If a white man raped my three-year-old granddaughter, so I go out and started raping three-year-old white children, I’d stoop below them. And so, that’s my problem here. Somewhere, it has to stop.

AMY GOODMAN: Now, with Lawrence Brewer’s execution—this is the man who was involved with the killing of James Byrd, that brutal killing where they ripped this African-American man apart. James Byrd’s family members are opposed to the death penalty for the white supremacist who killed him?

DICK GREGORY: No, I don’t base my thoughts on what somebody else is. The first time he came up for—to be executed, I took Martin Luther King III down there, and we fasted, and James Byrd’s son. I brought him to Houston. I said, “I want to ask you a question. The night that they brutally killed your daddy and lynched him, where were you?” He said, “I was in Camp Lejeune.” I said, “Tell me about this.” He said, “I just volunteered for the Marines. I was in boot camp.” I said, “Tell me what happened.” He said, “Well, a company commander came and told me what happened. Gave me a three-week pass. I went to the funeral.” “What did you do?” “Went back to Camp Lejeune, finished my boot training, went to Iraq.” So I should care what they think?

AMY GOODMAN: And he didn’t want to see his father’s killer killed?

DICK GREGORY: No, after we told him how stupid it was, he’d sit there with us. And when they get ready to kill that other white boy that was with him. You see, here’s what they did. It was three white boys did it. This one told on the other two, so he don’t get it. There’s something wrong with that.

AMY GOODMAN: That was activist and comedian Dick Gregory. 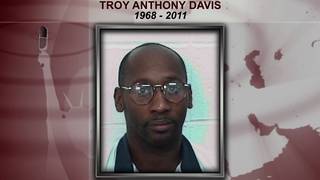