From Youth to Elderly, NYPD’s “Stop-and-Frisk” Targets People of Color Across Multiple Generations

Thousands participated in a silent march in the streets of New York City on Sunday calling on police to stop their practice known as “stop-and-frisk.” Last year, New York City police officers stopped and interrogated residents nearly 700,000 times. According to the New York Civil Liberties Union, about 87 percent of those stopped were black or Latino. We speak to stop-and-frisk victims and youth organizers Carmen Perez and Antonio Melendez. [includes rush transcript]

AMY GOODMAN: Ramarley Graham’s parents joined thousands who took part in the protest on Father’s Day, on Sunday, calling on police to stop the practice known as stop-and-frisk. Last year, New York police officers stopped and interrogated, oh, residents nearly 700,000 times. Just one in 10 were arrested or ticketed. According to the New York Civil Liberties Union, about 87 percent of those stopped were black or Latino. According to the Wall Street Journal, the number of stops of black men between the ages of 14 and 24 exceeded the total city population of black men in that age range.

Sunday’s protest was a silent march organized by the NAACP. It stretched down more than 20 blocks of Fifth Avenue, from Harlem to Mayor Michael Bloomberg’s mansion. After the march, I spoke to some of the young people involved.

AMY GOODMAN: And have you ever been stopped?

AMY GOODMAN: What do you mean “plenty”?

CARMEN PEREZ: Well, I think it was a cultural norm in my community. I come from California, a place called Oxnard, and they have gang injunctments there. And so, for us, you know, when you play basketball or you play sports, you use a certain color, and so you also meet the profile. And it became the norm for me until I went away to college, and I learned that that was injustice. And I learned to articulate, you know, being taken out of my environment and learning that what was happening to us wasn’t something that should be happening. I think, here in New York City, it’s the same thing. We—especially with young people is, it’s—we don’t want it to become normal, right? It becomes normal activity. It’s kind of like, you know, young people are saying, “Well, I don’t want to be a stop-and-frisk virgin,” you know, because it’s cool. It’s cool. It’s—

AMY GOODMAN: How old were you the first time you were stopped and frisked?

AMY GOODMAN: And what happened then? You were 11 years old?

CARMEN PEREZ: I was 11 years old. My brother was taking me home after a basketball game with my friends, and he actually met the profile. They pulled us over. They had us at gunpoint. They put us on the floor, and they hogtied him. And after being humiliated, I think—and that wasn’t—you know, that wasn’t the first nor was it the last. I think a lot of times after that, you just—you learn to kind of assume the position.

AMY GOODMAN: So explain what exactly they do to you, from when you were 11 years old. And who is the “they”?

AMY GOODMAN: You spread your legs?

CARMEN PEREZ: You spread your legs. You put your arms behind your back. You get, you know, felt up. And then, you know, sometimes, depending on the situation, you get put on the floor for a couple of minutes, or you have to sit down. It’s a huge—it’s one of the ugliest feelings ever. You know, you’re humiliated. It’s demeaning.

AMY GOODMAN: When was the last time you were stopped and frisked?

CARMEN PEREZ: It was after college. We were—there was an incident that happened where, you know, if you were in the vicinity, you got stopped, not necessarily frisked. But, you know, it was just kind of like wrong place at the wrong time.

AMY GOODMAN: And what do you now say to the police?

CARMEN PEREZ: You know, luckily, I’m not in those situations. But I do advocate for young people, because I’ve been there. And, you know, I think we need to have a conversation with police officers as community members, as activists, as young people. We need to create a space for that dialogue, so that they can know what they’re doing to us. And although they have to enforce this policy, it’s not right. It’s not right, what we do to young people, specifically, you know, Ramarley Graham, who was killed, you know, and didn’t have anything on him. I think what you’ve seen with these policies, you see, especially in Brownsville, you have, what, 93 out of a hundred young people that are stopped and frisked?

AMY GOODMAN: Can you tell me your name?

ANTONIO MELENDEZ: Hello, hi. My name is Antonio Melendez. I’m one of the Purple and Gold’s future of the movement, of the labor movement. I’ve been stopped plenty of times.

AMY GOODMAN: From where? Where you you live?

ANTONIO MELENDEZ: I live—I was living in Morris Park and White Plains.

AMY GOODMAN: You lived somewhat near where Ramarley Graham lived.

ANTONIO MELENDEZ: Yes, that was in 233rd. It’s on the north—I think the northwest.

AMY GOODMAN: How many times have you been stopped?

AMY GOODMAN: Have ever been arrested in any of those cases?

ANTONIO MELENDEZ: No, I have not.

AMY GOODMAN: So what do they do to you?

ANTONIO MELENDEZ: What they do, they tell me what I’m doing within this neighborhood. They stop me, and they frisk me. They tell me to take out everything out of my pockets. The fear of their control over me, of a United States that we can walk free, and every time I’m walking, I’m scared. I’m scared what can happen if I question why are you stopping me. They do get offended. They do get harsh sometime. They say you’re in a neighborhood that you shouldn’t be. And I thought we were free. And I was 11 my first time that they’ve stopped me, and so forth. And it’s humiliating, as well. I had tears the first time and wondering why did you stop me for no apparent reason. 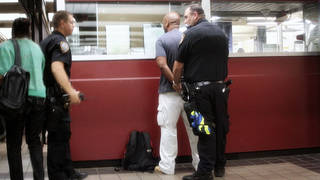