AMY GOODMAN: I want to ask the man behind you, a little older than most of you young people here, but nonetheless in the march with a sign that says, “Silent March Special Guest, Father’s Day, June 17, 2012.” Can you state your name, sir?

AMY GOODMAN: And, Dick Gregory, have you ever been stopped and frisked?

DICK GREGORY: Most of the time it was my fault. It was dealing in the civil rights movement. That was altogether a different type of stop, because they had to be on their best behavior then, because there’s too many cameras around.

AMY GOODMAN: What do think of all these young people who are describing, like the young woman next to you who said, or the young man on the other side of you, who said their first stop was when they were 11 years old?

DICK GREGORY: Yeah, it’s happened all the time. It’s just there never was no—there was never no spotlight on it. And that’s what’s so beautiful about this here. You know, it’s kind of interesting, today is Father’s Day, and we have probably one of the largest marches against stop-and-frisk and police brutality, and just coincidentally, Rodney King, who spotlighted it more than anyone around the world, just happened to die today, so maybe the universe is trying to tell us something.

DICK GREGORY: It highlighted around the world. And that hurts us, because we spend billions of dollars and thousands of lives to say we’re against this. And so, it’s just so evil when somebody, that you know, that you pay for, is doing this to you. Soldiers can handle stuff when they come back, when the person on the other side is supposed to be the enemy, and they’re not feeding them. But when someone gets a job and your tax money is paying for them, and when black mothers and Hispanic mothers got to wonder, when their children are just going out to the drugstore at night, will they come back?

But let me tell you something that’s interesting. Out of the thousands of black cops in America, you never turned on the TV or picked up the newspaper and see where a white family is complaining that some black cop shot their child or mother or father in the head 40 times. Now, you ask the question: are black cops more spiritual than white cops? Are black cops better trained? No, black cops know that white folks ain’t going to tolerate it. That’s why you don’t see that. And when we get to the point that we say we’re not going to tolerate it—now, what will have to happen for black folks to stop tolerating, let cops beat up the black folks’ car. It ain’t no accident you never heard a black person say, “That white racist cop shot my car. There’s something inside of me that wouldn’t tolerate it. I tolerate you my mother, my children, my family, but don’t mess with my car.” And you see that. And when that—and this will help that change. This will help that to come out before there’s an incident and send a message. Or if we was together enough, if we had one Christmas boycott against police brutality, then the white folks that’s not involved in it—the turkey growers, Disneyland, all you media folks—they would come out and stop it. And when they nod their head, it stops.

AMY GOODMAN: Dick Gregory, you have been marching for decades, a civil rights—

AMY GOODMAN: —leader in this country. Do you feel like we’ve made progress?

DICK GREGORY: Well, you have made progress. The difference is this. You see, it depends on what side of the tracks you’re from, what’s called progress. I’m 80 years old. When I was a little boy, they changed my dollar for 39 cents. Today they’s giving me 92 cents. And people say we’re making progress. Your mentality said, “I don’t want 92 cents’ change for a dollar. I want a full dollar’s change for a dollar, or this cash register will never ring again.” That’s the mentality we need. Cheating is cheating. If you steal $10 billion and I steal a penny, we’re both thieves. And once we can move to that level—but it’s a long, slow progress. I mean, when I look at white women, that didn’t get the right to vote 'til 1921, and they came over on the boat with that boy, so it's never been a easy—never been a easy thing. It’s the ones who stay out there. And this generation comes through and see, and then the next generation come through. But it’s the fear. It’s the fear that make people scared of doing things. “I’m scared I’ll lose my job. I’m scared I’m going to do this here.” And those that’s not will make the difference. And eventually it will happen, but I don’t think the country can survive that, the economy thing now. I mean, we’re all sitting here looking—my grandmother is wondering what’s going to happen in Greece. She don’t even know how to spell it. But she got a little money in the bank. And the white folks told her on all the networks, “Watch this. Watch this.” And she ain’t even registered. But she’s watching Greece. The money gets everybody’s attention.

AMY GOODMAN: What are your thoughts on the Romney-Obama race for president?

DICK GREGORY: Obama will win by a landslide. And all the betting parlors in Europe that’s been there for hundreds of years betting, they got him winning, not just now. Six months ago, they had him winning 60 to 40.

AMY GOODMAN: I last saw you in Jackson, Georgia, at the funeral of Troy Anthony Davis.

AMY GOODMAN: His sister, Martina, who fought for him and fought against the death penalty, was alive then, has died of cancer since. Since that time, Connecticut has become yet another state to declare a moratorium on the death penalty.

AMY GOODMAN: What do you think about the death penalty today? Do you think it will be abolished in America?

DICK GREGORY: I think it will be abolished, because the scientists have come in now and see—they do scientific research. You see, I don’t care what you are in this country—Christian, Muslim, nothing—as a little child, you hear, “Thou shall not kill.” That’s imprinted there, and the Chase Manhattan Bank can’t erase that. So, as much as we think we’re going to war to protect our country, when you get over there killing, still laying down there is “Thou shall not kill.” And it’s no accident that 30 veterans every day commit suicide. Nobody talks about that. And that’s what they’ve gone through. That’s what they looked at. And that’s what they see. And then, eventually, when you look at the homeless people in the street, 49 percent of the homeless people in the streets of America are veterans, and 92 percent of them have mental problems. So, in America, you can wave your flag to get your young folks to the front line of battle, but if you can’t wave that flag when they come back to see to it they get the right protection, that’s not a flag, that’s a rag we’re waving. And the minute we find out about it and as soon as we find out about it, things are going to change.

And this march here just don’t affect New York. You got police departments all over America now that sent people here to watch this. And the other thing, that’s the silent thing, they lose billions of dollars every year settling police brutality cases. And eventually the taxpayers is not going—they’re not going to tolerate it. They’re going to say, “Wait a minute. Stop.” And this is what happened. When you really—all my life, when I’ve seen a siren—nobody ever told me—I pray for them that where they’re going, the people they’re going to, the siren—it’s funny praying for a cop that you don’t know. But maybe when you think about, as a little boy, for Christmas, I never wanted a police car, and I didn’t know nothing about cop brutality. I always wanted a firetruck. And I hope it will come the day that children will want a firetruck and a police car. And then we know it’s over.

DICK GREGORY: I don’t believe in hope. We got in outer space; there wasn’t hope. We made rockets; there wasn’t hope. You bring in the hardcore scientists and shine a light on it and say, “We have to do this.” If I had a brain tumor, I don’t hope it’s going to get out; I’m going to ask you who’s the best brain surgeon here, and I’ll go to him. And that’s what’s going to happen. You shift the mindset of young folks that says, what you’re doing here goes out there [inaudible], this don’t have to happen, that it’s not all right. I come up in a black community when a cop beat up you and your brother, they say, “Well, thank God they didn’t kill you.” That’s no more. That’s no more. 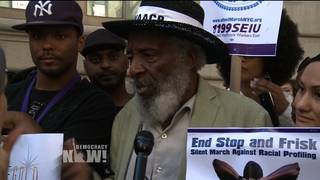