Dark Money: Will Secret Spending by a Group of Billionaires Decide the 2012 Election? (Pt. 1)

The 2012 presidential election is set to become the most expensive race in history, with spending projected to top $11 billion — more than double the 2008 total. It will be the first presidential election since the Supreme Court’s landmark Citizens United decision, which lifted a 63-year-old ban prohibiting corporations, trade associations and unions from spending unlimited amounts of money on political advocacy. We’re joined by reporter Andy Kroll and editor Monika Bauerlein of Mother Jones magazine, whose new cover story is “Follow the Dark Money.” The article warns: “Super-PACs, seven-figure checks, billionaire bankrollers, shadowy nonprofits: This is the state of play in what will be the first presidential election since Watergate to be fully privately funded.” Click here to watch Part 2 of the interview.[includes rush transcript]

JUAN GONZÁLEZ: We turn now to the 2012 presidential election, which is set to become the most expensive race in history. Experts project that spending will top a staggering $11 billion, which is more than double the 2008 total. It will be the first presidential election since the landmark Supreme Court decision, Citizens United v. Federal Election Commission. The ruling lifted a 63-year-old ban prohibiting corporations, trade associations and unions from spending unlimited amounts of money on political advocacy.

AMY GOODMAN: For more right now, we go to Washington, D.C., where we’re joined by Andy Kroll, reporter for Mother Jones magazine. His new cover story is called “Follow the Dark Money.” He writes, quote, “Super-PACs, seven-figure checks, billionaire bankrollers, shadowy nonprofits: This is the state of play in what will be the first presidential election since Watergate to be fully privately funded.”

Andy Kroll, welcome to Democracy Now! You begin your piece in a dramatic way. You go back to CREEP—that’s the Committee to Re-Elect the President, that was Richard Nixon—and the suitcases filled with money that were being taken to CREEP headquarters. And you make comparisons, 40 years later, to today. Please, take it from there.

ANDY KROLL: We’re back to the era of secret money pouring into our elections by, you know, six- and seven- and eight-figure sums. Back then you had Clement Stone, the insurance magnate who pumped millions and millions into Richard Nixon’s reelection effort, into CREEP. This time around, we have the casino mogul Sheldon Adelson, who is not only giving $10 million to Mitt Romney’s super PAC, the super PAC supporting him, that can take unlimited money and spend unlimited money. You also have Sheldon Adelson pledging to inject millions more secretly into Karl Rove’s outside political groups. And so, almost more than any election since that incredible Watergate election, if you will, with CREEP and Richard Nixon and all the secret money coursing through the system, we’re back to that era.

In some ways, we’re back to an era, but it’s legal now. Instead of corporations illegally giving money to Nixon’s reelection effort, we have corporations legally pouring money into the 2012 effort, whether it’s through the Chamber of Commerce or through, you know, any number of gauzy-named, anonymous front groups run out of UPS boxes here in the D.C. area. So, it’s a return of sorts to one of the darkest eras when it comes to money in our political elections.

JUAN GONZÁLEZ: But you also hearken even further back in American history to the days of Teddy Roosevelt, long known as a reformer president, but who also was one who encouraged and sought out secret campaign contributions for his own presidential runs.

ANDY KROLL: Yeah, there’s a long, bipartisan tradition of politicians on both sides of the aisle, reform and not, going to the biggest donors in the political system and shaking them down for money to stay in office. I mean, this is as American as apple pie. It dates back, you know, as far—into the 1780s even, about, you know, paying—trading quarts of rum for votes in an election in Virginia, for instance. So, there’s—you know, the story of American politics is deeply intertwined with money. It always has been. It always will be.

It’s just a matter of—you know, if you think about money as water and regulations as sort of the dam blocking the flood coming into our system, it’s just a matter of how damaged is that dam? How damaged are our regulations? How crippled are the laws that prevent money from just flooding the system? And right now the dam is breaking. The dam has holes in it, and the money is pouring in, you know, in ways that we really haven’t seen since Watergate or, you know—and some of the experts I talk to say we’re back to the days of the robber barons, you know, the Gilded Age, where corporations and millionaires and billionaires are just—you know, they have a megaphone, and they dominate sort of the political playing field.

AMY GOODMAN: We’re also joined by Monika Bauerlein, the co-editor of Mother Jones magazine. Monika, you write about Citizens United. Talk about—you know, everyone talks about Citizens United, the decision, the Supreme Court decision that unleashed the massive amounts of corporate money, allowed it to come into these elections, but I don’t think very many people really understand how it changed things.

MONIKA BAUERLEIN: It’s really very simple. It essentially said you cannot regulate political money, because political money is speech, and speech, of course, is protected under the First Amendment. It’s a little schizophrenic, because, of course, we do regulate what people can give to political campaigns directly, but we can no longer, according to the Supreme Court, regulate what corporations and people who are behind corporations spend, outside of directly giving it to a campaign committee. And so, that’s why we hear about super PACs, that’s why we hear about these shadowy 501(c)s, that can pretty much do as they please. They can walk, you know, into a congressional district or walk into a judicial campaign or a state legislative race or into the Wisconsin recall a couple weeks ago, and just dump millions of dollars into ads that don’t have to disclose who made them or what’s behind them or which interests are really being served—and all of this under the banner of protecting free speech.

JUAN GONZÁLEZ: And in terms of the public outrage and the possibilities of being able to pass new reform legislation on money in politics, it seems less likely than ever. Do you feel that the public outrage will channel itself into some kind of insistence on new laws?

MONIKA BAUERLEIN: I do, actually. I’m an optimist by nature, and I also believe that the American people are a lot savvier than they’re often being given credit for in politics. It is very difficult at the moment for people to really make out the connections between their own lives and, you know, this kind of thing that we’re talking about. It’s very difficult for people to see that they are hurting economically, because the political playing field has been tilted by vested interests. But that is possible. Andy and, you know, other reporters and transparency advocates are really working to get some disclosure into the system.

And once you start seeing the paths that this money takes and the results that it buys, I think people do make the connection. There’s only one thing that politicians really are more afraid of than having large sums of money being dumped into their campaign by people they cannot see, and that’s having to really answer to their constituencies every day on something that the constituents are really, really upset about. 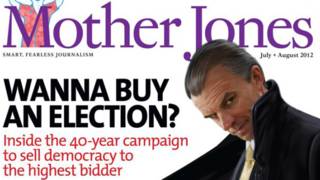