The new documentary film, “5 Broken Cameras,” tells the story of Palestinian farmer Emad Burnat, who got his first video camera to film his son growing up, but he went on to document the residents of his village Bil’in resisting the Israeli separation wall. Over the course of the film, one camera after another is smashed or shot as Burnat films his village’s resistance movement. Focused largely on the experience of Burnat and his family, the film explores the intersection of their life with Palestinian and Israeli politics. Emad Burnat and the film’s co-director, Israeli filmmaker Guy Davidi, join us for part two of our look at the film. Click here to watch part one of the interview. [includes rush transcript]

StoryAug 03, 2021Palestinians Reject Israeli Court’s Deal That Would Put Them at “Mercy of Settlers” in Sheikh Jarrah

JUAN GONZÁLEZ: On Thursday, we first told you about a new film that tells the story of a Palestinian farmer, his wife and four small children in the West Bank village of Bil’in. Emad Burnat got a video camera in 2005 when his youngest son, Gibreel, was born. At the same time, the Israeli army began building a separation wall between Bil’in and a nearby Israeli settlement, cutting off residents from the olive tree groves that were their livelihood. Burnat turned his camera on his fellow villagers as they responded with nonviolent protests, including marches to the wall every Friday. The result is 5 Broken Cameras, a prize-winning documentary by Burnat and his Israeli co-director, Guy Davidi. Today, they join us for part two of our look at the film. But first, this is a clip narrated by Emad Burnat.

EMAD BURNAT: [translated] An 11-year-old boy is killed in Nil’in. Snipers shot him near his home. Immediately after the funeral, a 17-year-old boy is also killed. Clinging to nonviolent ideals isn’t easy when death is all around.

AMY GOODMAN: Emad Burnat, narrating an excerpt from his new film called 5 Broken Cameras. Focused largely on the experience of Emad Burnat and his family, the film explores the intersection of their life with Palestinian and Israeli politics.

EMAD BURNAT: [translated] When I film, I feel like the camera protects me. But it’s an illusion. I film my brother Khaled’s arrest. My mother and father try to stop the jeep. I keep thinking, “What should I do?” I have to believe that capturing these images will have some meaning.

AMY GOODMAN: An excerpt from the documentary 5 Broken Cameras. During the course of the film, one camera after another is smashed or shot, as Emad Burnat films his village’s resistance movement, by Israeli soldiers or settlers. With each camera, a part of his story unfolds.

Well, Emad Burnat is here in the United States for the opening of his film, from Bil’in in the West Bank, along with his partner on the film and co-director, Israeli filmmaker Guy Davidi. 5 Broken Cameras is winning awards around the world, is in theaters now. It’s playing here in New York at the Film Forum through June 12th, which will host a Q & A with the filmmakers after tonight’s 6:30 screening.

We welcome you both to Democracy Now! There’s so much to talk about in this film, which is why we brought you back. Emad, that last clip that we just played, you are filming your brother being arrested, your parents throwing themselves at the truck and pleading with the Israeli soldiers, yet you are just behind this camera.

EMAD BURNAT: Yeah, I was filming at the same moment, and I saw my brother get arrested, and I saw my mother and my father trying to block the jeep and to stop to take out my brother from the jeep. But I said, I cannot do nothing, just to keep filming, because to keep filming is—the camera is a very important witness. And I thought that maybe I can help him with this footage, to protect him or to protect my family or to use the footage in the court.

JUAN GONZÁLEZ: And at times like that, when no matter what’s going around, happening around you, you’re fixated on that camera, the sense that you have of your role there at that point?

EMAD BURNAT: Yeah, I think I was always connected to the camera. The camera became my friend. So I thought that I have to keep filming, even when my brother arrest or my friend arrest or—so, it’s very important.

AMY GOODMAN: And yet, you started by filming—you got this camera to film your youngest son being born and growing up.

EMAD BURNAT: Yeah, I got the camera at the same time when the struggle started in my village. So I thought that I have to film the resistance in my village and to be part in this with my camera, and to film my family and my son growing up and watching what’s going on outside.

JUAN GONZÁLEZ: Well, at one point in the film, Israeli police come to your house at night. Your sons answer the door with you. Let’s go to that clip.

EMAD BURNAT: [translated] Now it’s my turn. I take the camera to protect myself.

ISRAELI POLICE: [translated] I ask you to stop filming.

EMAD BURNAT: [translated] I can film in my own house.

EMAD BURNAT: [translated] Get my ID. What’s the matter?

EMAD BURNAT: [translated] I am a journalist. I can film.

ISRAELI POLICE: [translated] This is a Closed Military Zone. Stop filming. Put down the camera.

EMAD BURNAT: [translated] I am a journalist, and I’m in my own home.

ISRAELI POLICE: [translated] Put down the camera. That is an order. Turn the lens to the wall. Give it to your son. He can put it down.

JUAN GONZÁLEZ: Emad, the police interrogated you, accused you of throwing rocks, and arrested you. They put you under house arrest. Talk about this and about how the soldiers reacted to you.

EMAD BURNAT: Yeah, the soldiers, they were always trying to stop me, by shoot my camera or shoot me. And I’ve been arrested twice. They came to my house, and they arrested me. And they told me—so I was filming in the same time to protect myself, because I thought—I felt that the camera protecting me. And yeah, I was arrested, because they want me to stop filming. And I was in house, arrested outside my house, outside the village. They want me to be outside and far from the village. So, they use many ways to—

AMY GOODMAN: So, how long were you held when you were imprisoned?

EMAD BURNAT: I was in prison for about 20 days in bad conditions. And I was outside the house, outside the village.

AMY GOODMAN: You were deported.

EMAD BURNAT: Yeah, I was deported outside the village for 45 days.

AMY GOODMAN: It’s not only the political situation that was a lot of pressure; inside your house there was pressure. Your camera is always on, whether you’re filming the family or demonstrations against the separation wall. I want to ask you about your wife’s reaction to all that was happening. This is a clip from near the end of 5 Broken Cameras.

SORAYA BURNAT: [translated] What did they say?

EMAD BURNAT: [translated] They said they were going to arrest me again tonight.

SORAYA BURNAT: [translated] What will you do?

EMAD BURNAT: [translated] What can I do?

SORAYA BURNAT: [translated] See what’s happening to us because of your filming! Now they’re taking you. You never know what they’re up to. If they take you, what will we do, the kids and I? You saw what they did to you before. But you never learn! I’ve told you to stop a thousand times! Stay home with your kids and find something else to do! Why didn’t you? Why, Emad? If they come, what will we do? What will I do? And the kids? It happened once, twice. I can’t take it a third time. Stop! Enough with the filming! I am so tired. Stop with the filming!

AMY GOODMAN: Your wife, Emad. Yet, you didn’t, and you filmed through these years, from when your baby was zero to right through to when he was five years old. We watch him grow up, and we watch this movement against the separation wall and the occupation grow up, including the killing of people you know.

EMAD BURNAT: Yeah, actually, in the beginning, I started filming, and it was normal, and everything was OK. But when my first camera was broken and I was injured few times, so my wife started to be worried about me. So I’ve been to jail, and I was far from the house, from the kids. And they were suffering without me, far. And she just—when I came, she want me just to be safe and to stop filming.

JUAN GONZÁLEZ: Yeah, Guy Davidi, I wanted to ask you—this whole concept of this Closed Military Zone, where people are not even allowed to film inside their own homes, is this generally known in the rest of Israeli society that these kinds of conditions are prevalent on the West Bank?

GUY DAVIDI: You know, it’s not because that I’m an Israeli that I can access to why people decide to do this decision, you know? This is a—this is reality when the relations between people are completely influenced by violence and by fear and paranoia. This is part of what Palestinians experience that’s coming from our paranoia, from Jewish cultural traumas and the sense of being the ultimate victims.

AMY GOODMAN: Well, we’re going to leave it there. The film is called 5 Broken Cameras, and it’s beginning to air around the United States and around the world. I want to thank Guy Davidi and Emad Burnat for joining us. 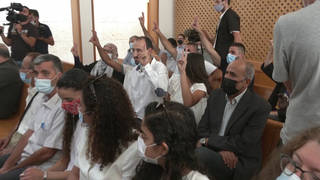