As thousands gather to discuss HIV and AIDS at the 2012 International AIDS Conference in Washington, D.C., the voices of many of those most affected by the global epidemic have been excluded. Travel restrictions bar foreign sex workers and drug users from entering the U.S., unless they can obtain a waiver. Sex workers and their allies have refused to be shut out of the global conversation on HIV/AIDS, staging a six-day alternative conference, the Sex Worker Freedom Festival, now underway in Kolkata, India. We go to Kolkata to speak with Meena Seshu, general secretary of SANGRAM, a grassroots group working for the rights of sex workers and people with HIV/AIDS in India, and Annah Pickering, a former sex worker and a member of the New Zealand Prostitutes Collective. “Sex workers are in the forefront of fighting this epidemic all over the world,” Seshu says. “It is unfortunate that the U.S. government has kept us out of these deliberations.” [includes rush transcript]

Web ExclusiveMay 28, 2020If We Don’t Fight Back, We Die: Larry Kramer’s Full Speech at the 2019 Queer Liberation March

AMY GOODMAN: “The Last Song.” Elton John dedicated the song to Ryan White, the American teenager who became the poster child of HIV/AIDS in the United States after being expelled from middle school because of his infection from a blood transfusion for hemophilia. Ryan White went on to become a spokesperson for AIDS research and public education. He died in 1990, one month before his high school graduation.

This is Democracy Now!, democracynow.org, The War and Peace Report. I’m Amy Goodman, with Nermeen Shaikh.

NERMEEN SHAIKH: As thousands gather in Washington, D.C., to discuss HIV and AIDS, the voices of many of those most affected by the global epidemic have been excluded. That’s because U.S. travel restrictions bar foreign sex workers and drug users from entering the United States unless they can obtain a waiver. While the Obama administration has lifted a ban blocking people with HIV from entering the country, the United States still denies entry to people with a history of drug abuse or addiction and those who have engaged in prostitution in the past decade.

The exclusion of foreign sex workers from the International AIDS Conference comes after a landmark study published earlier this year in the Lancet found female sex workers are 14 times more likely to be infected with HIV than women in the general population. It also comes on the heels of a report from Human Rights Watch that found police in major U.S. cities are hindering HIV prevention efforts by confiscating condoms from sex workers and even arresting them for carrying condoms.

AMY GOODMAN: Well, sex workers and their allies have refused to be shut out of the global conversation on HIV/AIDS. They’ve set up a six-day alternative conference called the Sex Worker Freedom Festival, now underway in Kolkata, India. They’ve been video linking with the main conference in Washington, D.C., as well as holding their own conversations about HIV and sex workers’ rights.

So we’re going to Kolkata, India, now, where we’re joined by two guests. Meena Seshu is general secretary of SANGRAM, a grassroots group working for the rights of sex workers and people with HIV/AIDS in India. She addressed the International AIDS Conference two years ago in Vienna. And we’re joined by Annah Pickering, a former sex worker and regional manager of the Auckland branch of New Zealand Prostitutes Collective. Prostitution has been decriminalized in New Zealand.

Meena and Annah, we welcome you to Democracy Now! Let’s begin with Meena. You’re in your home country; you’re in India. Why aren’t you in Washington, D.C., for the 19th International AIDS Conference?

MEENA SESHU: Because the U.S. will not allow my colleagues and co-workers to enter the U.S. This conference, the AIDS—global AIDS conference has been going on for 25 years, with scientists, planners, people most at risk to HIV meeting and planning and helping to root out HIV. Unfortunately, the U.S. government has thwarted this, and this year, this conference, we have been kept out. Sex workers are in the forefront of fighting this epidemic all over the world. It is unfortunate that the U.S. government has kept us out of these deliberations and not allowed us to enter the United States.

AMY GOODMAN: What is your message to the people in Washington, D.C.? And particularly talk about the work you’re doing in India right now.

MEENA SESHU: Well, I work with RAM, which is a collective of sex workers in western India, and we have been fighting this epidemic for 20 years now. We are with the government of India. We do targeted interventions with the government of India. The problem is that governments do not realize that they have to help us fight this epidemic. Structural interventions by government, police violence, state violence, law enforcement violence is escalating. You have a condom on you, you’re picked up and arrested for being a sex worker. It is unfortunate that the government is not getting its act together. And we are having to deal with a flawed policy, flawed practice, such that we end up with flawed HIV programming. Sex workers have to be at the forefront of this epidemic. I mean, they have to fight this epidemic, and we are not being given a chance. We are not being given a fair chance.

NERMEEN SHAIKH: Meena Seshu, what are some of the problems that you’ve encountered working with sex workers in India in terms of access to health services and treatment?

MEENA SESHU: Stigma, discrimination, moral policing. We are fighting for the police to treat us with dignity and respect. The problem with the police is that they are following what is known as the Immoral Traffic Prevention Act, which is the act under which prostitution or sex work is dealt with. And unfortunately, trafficking, which is a criminal offense, is looked at as an immoral trafficking act. And so, sex workers are immoral. The disease that they are considered to be as vectors of spread of this disease, it’s considered an immoral disease. Health authorities also do not give us the kind of respect that we need to fight this disease.

AMY GOODMAN: Annah Pickering, I wanted to bring you into the conversation. You’re in Kolkata, India, for this alternative conference, since you can’t get into the United States. Did you apply, actually, to try to come to the conference from New Zealand?

ANNAH PICKERING: No, we didn’t apply. Once we heard that some of our members had been refused entry into the United States, then we had to go to plan B, which is why we are in Kolkata.

AMY GOODMAN: Tell us about New Zealand’s policy. What does it mean that sex work, prostitution, is decriminalized?

ANNAH PICKERING: What it means is, New Zealand, a Pacific nation, has decriminalized sex work, when that means that it’s removed most of the laws against adult consensual sex, living off the earnings of prostitution and soliciting.

AMY GOODMAN: What do you mean by sex work?

ANNAH PICKERING: What we mean by—what we mean by sex work is that sex work is work. It’s a job. Sex workers in New Zealand are protected under the law. They can go to the police, and for any type of violence that might happen to them, they can report that. There’s also the—their labor rights are protected under occupational safety and health, so the Labor Department—Department of Labor, what we call in New Zealand—they have a manual which clearly states how sex workers can work safely in their environment, whether it’s on the streets or escorting or in a brothel.

NERMEEN SHAIKH: Annah Pickering, New Zealand was not only the first country to decriminalize sex work, in 2003, but they also were the first country in the world to introduce legal and nationwide needle exchanges. Can you say a little about how this came about?

ANNAH PICKERING: Well, what happened in the early '80s is that there was a HIV scare, and in the early ’80s, I mean, part of that movement was that the injecting drug community and sex workers got together to formalize a group, approaching the government about making reforms to certain parts of the law that discriminated injecting drug users and sex workers. And then part of that movement, solidarity, and that created the needle exchange program, which is still running and very successful 26 years later. And that's what’s happening.

NERMEEN SHAIKH: Meena Seshu, I just want to ask you about the U.S. Anti-Prostitution Loyalty Oath. Can you say a little about the significance of that?

AMY GOODMAN: I’ll ask this question to both Meena and Annah: those who say that decriminalization of sex work, of prostitution, could lead to the exploitation of vulnerable women and girls?

ANNAH PICKERING: Well, I’d like to challenge whoever says that, because in New Zealand we have academic research that backs the evidence that decriminalization works in New Zealand. Yes, violence doesn’t stop, but what that means under decriminalization is that sex workers can report violence. And the other thing is that sex workers are no longer criminalized for carrying condoms, which is part of their job, and preventing HIV, prevention and safe sex. And the other thing is, under decriminalization, is that, you know, sex workers can also educate their clients about using condoms, and it also would—it prevents HIV and sexually transmitted infections.

AMY GOODMAN: Well, I want to thank you both for being with us, for breaking the sound barrier, joining us here in the United States via Democracy Now! video stream from Kolkata, India, where you’re holding this hub conference, this alternative conference. Also in Kiev, in Ukraine, is another hub conference. There, drug users, people dealing with drugs, who are also not allowed into this country, are holding a hub conference. Meena Seshu, general secretary of SANGRAM, grassroots group working for rights of sex workers and people with HIV/AIDS in India, and Annah Pickering, former sex worker and regional manager for the Auckland branch of the New Zealand Prostitutes Collective, thanks so much for being with us. Back in a minute. 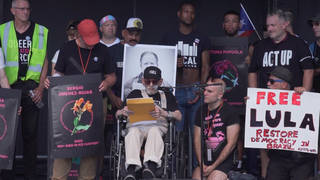