Set up for the Republican National Convention in Tampa, the “Romneyville” encampment is similar to Hoovervilles of the 1930s Great Depression. Residents of Romneyville are calling for an end to foreclosures, homelessness and the criminalization of poverty. We hear from Shamako Noble, a Romneyville resident and executive director of the Hip Hop Congress. And we speak to Cheri Honkala, the Green Party’s vice-presidential nominee in the 2012 election and the national coordinator of the Poor People’s Economic Human Rights Campaign. [includes rush transcript]

AMY GOODMAN: This is Democracy Now!, democracynow.org, “Breaking With Convention: War, Peace and the Presidency.” We’re on the road in Tampa, Florida, covering the Republican National Convention. Next week we’ll be in Charlotte for the week, and we’re on a hundred-city tour around the country, supporting community media, public radio and television. Today we’re broadcasting from PBS station WEDU here in Tampa. I’m Amy Goodman, as we turn now from the austerity message of Republicans to visit an encampment called “Romneyville.”

Set up here in Tampa for the RNC, the camp is similar to Hoovervilles of the '30s Great Depression. Residents of Romneyville are calling for an end to foreclosures, homelessness and the criminalization of poverty. This is a clip from one of the encampment's residents.

SHAMAKO NOBLE: My name is Shamako Noble. I’m the executive director of Hip Hop Congress and a member of the Poor People’s Economic Human Rights Campaign. I kind of came to this movement as an artist. I’m an MC. I’m sure everybody is familiar with the term “struggling artist,” but, you know, there are millions of them—singers, dancers, poets, musicians. And on top of that, I’m also a formerly homeless father. So, you know, much like some of the stories you heard, I’ve been in this situation. There’s many reasons that can happen. I live in Silicon Valley. So that’s a place where jobs are as temporary as they come. One minute you’re gainfully employed, and the next minute your position is in Bangladesh. That’s just kind of the nature of the beast there.

MIKE BURKE: And I’m curious, if Mitt Romney or Paul Ryan came by Romneyville, what message would you share with them?

SHAMAKO NOBLE: First off, I don’t really have a lot of faith that any message I would share with them would actually resonate. Believe me, I’ve tried. But, you know, for the most part, what I feel like they need to understand is that we’re all human beings. Some of the policies that they advocate, some of the positions that they take—you know, both being men of faith—are not consistent with the core of the Christian tradition. Jesus was—Jesus walked with the poor. He walked with the beggars and the prostitutes and those who were not the bankers. And I think that any true man of Christian faith, or, you know, I think a large majority of the world’s religions say one thing very clearly, and that is, treat the poor with dignity and respect. And even further, there’s really no reason for there to be poor.

SHAMAKO NOBLE: Mm-hmm. Well, you know, to be honest, I arrived here yesterday. My first night was—we were greeted with a circling helicopter. It was kind of just working itself around kind of throughout the evening. Earlier this morning, we had, you know, police officers come and sort of flank the camp, sort of politely begin their process of “introducing” themselves to the folks at the camp. And, you know, the numbers go from two to five to 10 to 20. And so they’ve been kind of hanging out here all day. Given past precedent, we expect the numbers to grow.

MIKE BURKE: What message do you feel like they’re sending you?

SHAMAKO NOBLE: It’s intimidation tactic. They’re definitely not here to support us. They’re not here in solidarity. And they’re not here to, you know, make sure that we’re safe. Their job is to protect the interests of big ownership and private property, and that’s what they’re going to do.

Well, for more, we’re joined here in Tampa by Cheri Honkala, the Green Party’s vice-presidential nominee in this 2012 election, also national coordinator of the Poor People’s Economic Human Rights Campaign. Here in Tampa, the campaign is the driving force behind Romneyville. Another vice-presidential candidate—and vice president—Joe Biden, was going to be here to offer opposition points to the Republicans, but he chose not to come.

You’re here, Cheri. Talk about Romneyville and why you think this is important, and thanks for coming in from the rain.

CHERI HONKALA: Oh, thank you. I’ve always been in the heart of the storm, for many years. So, we’ve set up another Romneyville. At every convention, both Democratic and Republican conventions, we set up Hooverville-like encampments. And it’s for residents to be able to stay someplace that are currently homeless or suffering because they don’t have access to healthcare or the other basic necessities of life. And so, they stay in a safe space, before we always go on a large march, so that people can use their voices to talk about what they see is happening in this country. And this is going to be the first time that I’m doing it as a vice-presidential candidate. I’m probably the only candidate that has run for one of our country’s highest offices being a formerly homeless mother myself.

AMY GOODMAN: How did you end up being homeless?

CHERI HONKALA: I was working at my job, and I got laid off. And I had to tell my nine-year-old son at the time that we had to move into our car. And so, we moved into this white little beat-up car that we had. And on a cold, snowy night, my car was hit by a drunk driver. And Mark and I had to do something different. And I learned about this phenomenon of houses staying vacant in the north in the wintertime so that the pipes won’t freeze. And so, we moved into an abandoned HUD property. And for 25 years, I’ve been housing families in that same manner.

AMY GOODMAN: Will you be setting up an Obamaville in Charlotte?

CHERI HONKALA: Yes, we will also be setting up an Obamaville in Charlotte. You know, I was very excited by the first African American running for presidency and was disheartened, like a lot of Americans, when I came to learn that there actually is only a one-party system in this country that is supported by corporations and the rich and very sad to learn that Obama has also—he spent as much money as George W. Bush on the military. And people are hurting across this country right now. Eight million families have lost their homes to foreclosure. And we still have the school-to-prison pipeline. And the list goes on.

AMY GOODMAN: Tampa, one of the ground zero cities for foreclosures. In fact, they were moving some people into—this was the activists—abandoned homes here.

CHERI HONKALA: Yes. Actually, the day before yesterday, I participated in moving a homeless family into a foreclosed home that was owned by Chase Bank, because it was important to, you know, use the national media stage right now to talk about these issues, that we think that it’s absolutely appalling, and it should be against the law to allow women and children to be on the streets of our country.

AMY GOODMAN: I want to play a comment from former Republican presidential hopeful Herman Cain speaking last night here in Tampa at the tea party event at the River Church. There are hundreds crowded in to hear him speak along with Michele Bachmann. During his address, Cain corrected what he said were misreported facts about the percentage of people who are unemployed.

HERMAN CAIN: Unemployment is not 8.3 percent, it’s 15 percent—23 million people out of work. Know the facts. But they just keep saying, always, 8.3 percent. No, when you include the underemployed and the unemployed, it’s more like 15 percent. 23.5 million people are out of work, and they can’t find a job in an economy because businesses—and rightly so—are stalled because of all of the uncertainty in this economy coming out of this administration.

AMY GOODMAN: Later in his address, Herman Cain continued on the theme of employment, this time with a message for the Occupy protesters targeting the RNC.

HERMAN CAIN: Think the so-called 99 percenters are demonstrating somewhere in town. I have a message for them, if they are listening: get a job!

AMY GOODMAN: That’s Herman Cain, and that certainly got a lot of applause. The former Republican presidential hopeful, the pizza entrepreneur. Cheri Honkala, your response?

CHERI HONKALA: Well, I think that Herman Cain should maybe meet with the 26,442 people who recently applied for jobs in Alabama, and out of that, only 877 people ended up getting employment. You know, there’s not eight million people that are irresponsible and refusing to work and pull themselves up by their bootstraps. There’s a real crisis that’s happening in this country. And when corporations and the wealthy can go anyplace in the world and pay somebody to do child labor or slave wages, why would they pay the American worker a decent wage? So, some people get lucky. We don’t all start on the same starting line. And both of these folks—all of these folks are really disconnected from the reality of what’s happening to the American people. And we invite them to come and visit Romneyville, meet with some of the residents, hear their stories.

AMY GOODMAN: Well, we’ll be continuing to cover what happens inside and outside the convention. I want to thank you very much, Cheri Honkala, Green Party vice-presidential candidate, one of the forces behind Romneyville here in Tampa, Florida. That does it for “Breaking With Convention” this hour. If you missed any part of our two-hour broadcast, go to our website at democracynow.org. I’ll be speaking at the Palladium Theater here Friday night benefiting WMNF, the community radio station here. 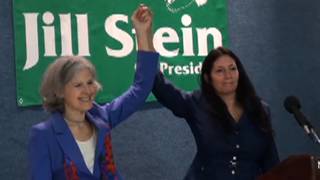