When Mitt Romney walked down the aisle toward the stage Thursday night, among the people whose hands he shook was the conservative billionaire and major political donor David Koch. But it was a moment missed by the tens of millions of viewers at home. While Democracy Now! was there on the floor and captured the handshake on video, the networks cut away just before the handshake to show footage of two enthusiastic young women supporters and then an overhead shot of the convention center. Then, the shot came back to Romney shaking hands further down the aisle as he ascended the stage. Groups in the network of David Koch, and his brother Charles, intend to spend nearly $400 million ahead of the 2012 election. [includes rush transcript]

AMY GOODMAN: I want to go back to that moment when Mitt Romney made his entrance on Thursday night. He walked down the aisle of the Republican convention, and as he was passing the New York delegation, he shook the hand of the state Republican Party chair, Ed Cox, and then he shook hands with David Koch, actually put his hand on his shoulder, pointed at him, and then shook his hand. While Democracy Now! was there on the floor, we captured the handshake on video. The pool feed that went out, that the networks broadcast, cut away just before the handshake, showing two enthusiastic young women supporters, and then an overhead shot of the convention center. Then the shot comes back to Romney further down the aisle, shaking hands as he ascended the stage. And we show that split screen. For our radio listeners, you can go to democracynow.org. I think it’s an interesting metaphor for the money behind the scenes, not highlighted even by the media. Medea?

MEDEA BENJAMIN: Well, I think, in the last—past conventions, you’ve seen it more overtly. They’d be giving out the bags, would have the corporate logos on them, and it would be so easy to know who is the sponsors. Now I think the parties are afraid, because people are so outraged. I would say, on the left and the right, knowing that this presidential election is going to cost $2.5 billion—obscene—the—if you add the congressional races, you’re up to $5.8 billion—that just says that our system is broken. And I think that the two parties are worried about it, because the American people are starting to realize that it’s very hard to keep calling our system a democracy when it’s really being run by a very small elite that is the shadow government. 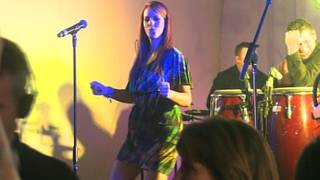