As the Chicago public school teachers’ strike enters its second day, we’re joined by the journalist and author Chris Hedges. “The teachers’ strike in Chicago is arguably one of the most important labor actions in probably decades,” Hedges says. “If it does not prevail, you can be certain that the template for the attack on the union will be carried out across the country against other teachers’ unions and against the last redoubt of union activity, which is in the public sector, of course — firemen and police.” Hedges continues, “It’s always the ruling class that determines the parameters of rebellion and resistance. And the Chicago strike illustrates the bankruptcy of both traditional labor and the Democratic Party. And that’s why the Occupy movement was so important.” Hedges is the author, with illustrator Joe Sacco, of the new book, “Days of Destruction, Days of Revolt.” [includes rush transcript]

How does this strike, Chris, fit into the story you tell in this book?

CHRIS HEDGES: It completely dovetails with everything Joe and I have been reporting on for the last two years. What happened in these sacrifice zones has already taken place: a complete disempowerment, a destruction, an impoverishment of these incredibly poor pockets, largely invisible, within the United States, and the assault that has been carried out against Native American communities on reservations, against the inner city. We report a chapter out of Camden, New Jersey, per capita the poorest city in the United States. These tactics are now being visited upon the rest of us.

And that’s why the teachers’ strike in Chicago is arguably one of the most important labor actions in probably decades. If it does not prevail, you can be certain that the template for the attack on the union will be carried out across the country against other teachers’ unions and against the last redoubt of union activity, which is in the public sector, of course—firemen and police. That’s already happened. You know, since we wrote the book, in Camden, they’ve fired the entire police force. Camden is the—not only the poorest city per capita, but one of the most dangerous, because they wanted to break the police union, which they have done.

AMY GOODMAN: This is in Camden, New Jersey.

CHRIS HEDGES: In Camden. And so, you know, we went into these sacrifice zones to show what happens when families, individuals and communities, as well as the environment, are forced to kneel before the dictates of the marketplace. And what you get is personal, economic and environmental devastation.

And now these forces, these corporate forces that have made these sacrifice zones prostrate themselves before corporate profit, corporate greed, are turning on the rest of us, as we rapidly reconfigure this country into a neofeudalistic society, an oligarchic state. And it is, I think, emblematic that the reptilian heart of the Democratic Party is sort of represented by the mayor of Chicago, Rahm Emanuel, who has, like—as far as I can tell, all major Democratic figures turn their backs on the union activity and the struggle on the part of the Chicago teachers, including, of course, Barack Obama.

AMY GOODMAN: You know, it’s interesting, the—right now, the questioning of the corporate media—you know, why have the teachers waited 'til this point? You know, why didn't they negotiate before? But I saw Rahm Emanuel, the mayor of Chicago, in Charlotte, North Carolina, that week—

AMY GOODMAN: —for the Democratic Party.

CHRIS HEDGES: Well, you know, the tactic is clear. And, you know, the secretary of education, Duncan, is behind it. And that is essentially the stripping away of—you know, of qualified teachers. We’re watching it in New York. You know, the mayor of New York is very much a part of this effort. The assault on the New York City teachers’ union is as egregious as the assault against the Chicago Teachers Union.

And it really boils down to the fact that we spend $600-some billion a year, the federal government, on education, and the corporations want it. That’s what’s happening. And that comes through charter schools. It comes through standardized testing. And it comes through breaking teachers’ unions and essentially hiring temp workers, people who have very little skills. This is what Teach for America is about. They teach by rote, and they earn nothing. There’s no career. I mean, there’s quite a difference between teaching people what to think and teaching people how to think. And corporate forces want to teach people what to think. It’s a kind of classism. People get slotted. It’s vocational. And so, I see what’s happening in Chicago as, you know, one of the kind of seminal uprisings of our age. And if they don’t succeed, we’re all in deep trouble.

CHRIS HEDGES: I hope so. We did see—we have seen rallies in New York. I think what’s important about the Chicago movement—and we just heard an explanation of that—is that it rose up in defiance of traditional centers of power, including centers of labor. And that of course parallels the Occupy movement.

For me, when the Obama administration, in a coordinated effort, shut down the encampments—and the last chapter of our book is “Days of Revolt,” it’s written out of Zuccotti—it exposed its hand. A rational response—this is something Paul Krugman in column after column asks for in terms of our economic crisis—a rational response to the injustices and grievances that have been visited now on tens of millions of American workers and their families would have been a moratorium on foreclosures and bank repossessions; a massive jobs program, especially targeted at people under the age of 25; forgiveness of student debt; a rational healthcare program—we know the Obama administration very cynically killed off the public option. But that didn’t happen. I mean, that’s what happened in the New Deal. That would have gone a long way to dissipating the unrest that is now inevitable. And instead, the security and surveillance state stepped in to physically eradicate these encampments. It’s always the ruling class that determines the parameters of rebellion and resistance.

And the Chicago strike illustrates the bankruptcy of both traditional labor and the Democratic Party. And that’s why the Occupy movement was so important. Whether it reconstitutes itself as Occupy, whether what comes next even calls itself Occupy is, for me, not relevant. Occupy was a tactic in the same way the Freedom Rides were a tactic. And I see what is happening in Chicago as intimately linked to the Occupy movement itself. It’s community-based. It is fighting both political parties, that have sold out to corporate interests. I mean, the enemy of the Chicago Teachers Union is, you know, one of the most important figures within the Democratic Party and of course a close ally of Barack Obama. I mean, that whole convention, which you covered, you know, not one major Democratic figure, as far as I know, has come out in support of the teachers in Chicago.

AMY GOODMAN: And yet, Mitt Romney is accusing them of doing just that.

CHRIS HEDGES: Well, I mean, it’s the whole absurdity of the debate back and forth. I mean, we know that, in essence, “Obamacare” was “Romneycare.” You know, the political rhetoric on each side bears no relation to the reality that’s happening around us.

AMY GOODMAN: We’re talking to Chris Hedges, who is the author of Days of Destruction, Days of Revolt with Joe Sacco. And we’ll continue our conversation, as we look at the “sacrifice zones,” as he puts it, around the country, in a moment. 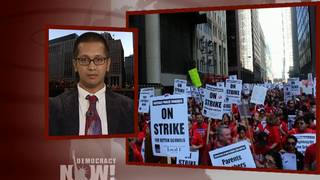