School is out in Chicago for a second day, as public school teachers continue their first strike in 25 years. Almost 30,000 teachers and their support staff have walked out over reforms sought by the city’s powerful mayor, Rahm Emanuel, who is President Obama’s former chief of staff. On Monday, tens of thousands teachers, parents and students marched in the streets of President Obama’s adopted hometown. We go to Chicago to speak with Democracy Now! correspondent Jaisal Noor. [includes rush transcript]

AMY GOODMAN: School is out in Chicago for a second day, as public school teachers there continue their first strike in 25 years. Almost 30,000 teachers and their support staff have walked out over reforms sought by the city’s powerful mayor, Rahm Emanuel, who is President Obama’s former chief of staff. The teachers’ union called the strike Sunday night after months of negotiations failed to resolve demands for pay raises, better classroom conditions, job security and evaluations. On Monday, over 10,000 teachers, parents, students marched in the streets of President Obama’s hometown. Many called on Obama to get involved. This is teacher Michele Timble.

MICHELE TIMBLE: I just think that President Obama needs to be a part of this. We’re his hometown, biggest—third-biggest district in America. And he needs—he’s like this with Rahm, and he needs to get it done. He needs to put some pressure on Rahm and make it happen, get us back in the classrooms. We’d love it if Obama joined us on the picket line, but I’ve got to say, he didn’t show up for the workers, the union workers in Wisconsin, so we’re really hoping that he shows up for us.

AMY GOODMAN: Meanwhile, the strike has become fodder for the 2012 presidential race. Republican nominee Mitt Romney issued a statement saying he’s disappointed with the teachers, that Obama has, quote, “chosen his side in this fight” by previously supporting the National Education Association and the American Federation of Teachers. White House Press Secretary Jay Carney said Obama has not taken a position on the situation.

PRESS SECRETARY JAY CARNEY: More broadly, that our principal concern is for the students, and his principal concern is for the students and families who are affected by the situation. And we hope that both sides are able to come together to settle this quickly and in the best interests of Chicago’s students. But I don’t—beyond that, I haven’t got a specific reaction from the president.

Welcome back to Democracy Now!, Jaisal. Tell us what’s happened in this first day of the strike, as we move into the second.

JAISAL NOOR: Well, Amy, tens of thousands of teachers and their supporters marched through downtown Chicago yesterday. It was a sea of red, one of the biggest marches I’ve ever seen. And, you know, people are really excited about the strike, about the opportunities to have their voices heard. You know, a lot of the education policy in this country comes from the top, from people that have little or no experience in a classroom, little or no experience in the low-income communities that are disproportionately affected by these reforms. And it was moving to see Chicago united behind the teachers, that are, you know, not just fighting for themselves, but they’re fighting for their students. And that’s something that a lot of people in Chicago and around the country are—have been waiting for and are really prepared to get behind.

JAISAL NOOR: That’s a really important point that we should not—that is often missed in this discussion about the Chicago Teachers Union. Karen Lewis and CORE, the Caucus of Rank-and-File Educators, they’re a group of teachers that came together to fight school closings, to organize communities to oppose school turnarounds. That is a policy that was started in Chicago with Renaissance 2010 and No Child Left Behind, and it’s devastated communities. It’s led to the layoffs of hundreds of teachers. And the previous union leadership was not fighting, was not organizing the community to oppose these policies. And this is—and sort of from the ashes of those schools that were closed, this group of teachers came together, and eventually, in 2010, they were able to take control of the third-largest school district and the third-largest teachers’ union in the country. And this has national ramifications, because it’s really the only—this is the first time in a long time where teachers are working hand in hand in collaboration with community members, who really—you know, it’s the parents, it’s the students, that that public education is for. So, they’re working hand in hand. And it’s—they’re fighting an uphill battle. They are fighting the most powerful forces in the country that have an agenda of privatization of school closings, of increasing testing. But this force is something to be reckoned with.

AMY GOODMAN: Jaisal, I want to play a short comment from Chicago Mayor Rahm Emanuel about the teachers’ call for a fair contract. I’ll play that in a moment. But talk—why don’t you introduce it by talking about who—the significance of Rahm Emanuel, the former chief of staff of President Obama?

JAISAL NOOR: Right, Amy. So, Rahm Emanuel, he was a political—you know, he was part of the Daley administration, closely linked with Mayor Daley in Chicago in the last decade. And he’s a very corporate, top-down—his approach is very corporate, top-down. He has no regard for teachers or for parents. You know, he sank so low as to pay protesters to voice opposition to the communities that were fighting school closings earlier this year. That’s kind of what the teachers and the communities that are supporting this strike are fighting against.

MAYOR RAHM EMANUEL: This offer is respectful of our teachers. It does right by our students and is fair to our taxpayers.

JAISAL NOOR: You know, that’s a key point, because the media—even at the news conference on Sunday when the strike was announced, the media was asking, you know, the president of the Chicago Teachers Union, Karen Lewis, you know, “So this is just about the money, right? This is just about the pay increase. Why don’t you take the money?” And Karen Lewis’s response was, this is not just about the money. This is about classroom conditions. This is about having ACs in school. It’s about having reasonable class sizes. It’s about not linking teacher evaluations, teacher pay to student test score. And so, this offer—the union is willing—they’ve got the communities behind them, they’ve got the teachers behind them, and they’re not going to accept an offer unless it addresses all of their demands.

AMY GOODMAN: Jaisal Noor, I want to ask you about one of the high schools you’ve been reporting on in Chicago. Rocio Mesa, one of the students at Social Justice High School, describing the steps taken by her new principal after the school’s longtime principal was fired last month with little explanation.

ROCIO MESA: Right away, the new principal, Ms. Velasquez, she took away three of our AP classes, you know, and she pretty much messed up our whole schedule. She put in remedial classes, and pretty much that’s an insult. That’s saying we’re not smart enough, we don’t need to belong in those AP classes, we’re stupid. And so, right off the bat, I feel that her choices not only reflected her personal positions, because she tried, of course, to rationale with us: “Oh, look at the test scores. You know, they’re doing pretty bad.” And when we would point out to her saying we have a positive trend in the test scores, we’ve actually increased in AP enrollment, we’ve increased in AP passings, in general. And also it relates because her decisions to destabilize the school are not only on her behalf, but it’s pretty much she’s listening to her superiors.

AMY GOODMAN: That’s Rocio Mesa, a student at Social Justice High School. Jaisal, as we wrap up, put this into the context of the teachers’ strike.

JAISAL NOOR: So, the story of Social Justice High School is the story of Chicago, is the story about the strike. It’s a microcosm for it. What the student was describing was this top-down approach to education, not listening to the students. The principal that was dismissed, she wasn’t a longtime principal, but she was a beloved principal, one the community picked. She was dismissed. Two longtime teachers, two founding members of Social Justice High School—a school that was created after a hunger strike, after community organizing because of a lack of a school in a Mexican-American neighborhood in Chicago, an impoverished neighborhood—they were dismissed because they asked—these teachers, asked questions. And the students kind of had their own strike earlier this year. They refused to—they refused to speak in school. They had a walkout, they had a sit-in—very similar to what’s happening across Chicago now in hundreds of schools.

So, this is a story of how communities have to struggle. They’ve had to struggle and come together all across Chicago to get very basic services. Now even those are being taken away. But, you know, Rahm kind of messed with the wrong school. This is Social Justice High. These kids are well organized. They have the supporting—they have the support of the community. The union backed them. And these were some of the students that were out in the strike supporting the teachers now. They got their teachers rehired. They got their advanced placement classes reinstated. They’re still fighting to get their principal back. And they’re still fighting to get community control over this school.

If I have just a minute to just continue, this school does not have a local school council. Almost every school in Chicago does have a local school council. The most radical experiment in democratic education in urban schools started in 1987. This is the only—Chicago is the only urban school district where communities and teachers have a voice in the budget, who the principal is, how the school is run. Across the country, people are asking how to fix urban education. Chicago has the answer. The top performing schools in Chicago that are low income are schools with local school councils. I visited a school that was physically falling apart in March. The walls were falling apart. The hand railings were falling off the wall. But they had community input. They had teachers that are working with parents, grandparents, in one of the most impoverished, heavily—this community has tons of crime. And yet, they were the seventh-highest-performing school serving a low-income community in Chicago. So, there’s lessons here to be learned about public education, about urban education, and how communities and teachers and students can work together to have their voices heard.

AMY GOODMAN: Jaisal Noor, I want to thank you for being with us, Democracy Now! correspondent covering the student—covering the teachers’ strike in Chicago. 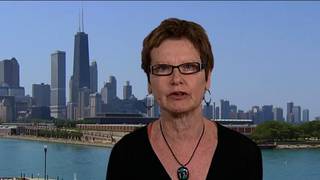