In 2010, Pittsburgh adopted a first-in-the-nation ordinance banning corporations from extracting natural gas within the city using the controversial technique known as hydraulic fracturing, or “fracking,” over human health and environmental concerns. However, state officials now say the ban on fracking fails to comply with Pennsylvania law and has encroached on the state’s authority to create environmental regulations. We speak with the man responsible for the drilling ban, former Pittsburgh City Councilmember Doug Shields. [includes rush transcript]

AMY GOODMAN: “My Water’s On Fire Tonight,” a production of Studio 20 at NYU in collaboration with ProPublica.org. This is Democracy Now!, democracynow.org, The War and Peace Report.

We’re on the road in Pittsburgh, Pennsylvania, where in 2010, well, Pittsburgh adopted a first-in-the-nation ordinance banning corporations from natural gas drilling in the city. However, state officials now say the ban fails to comply with Pennsylvania law and has encroached on the state’s authority to create environmental regulations.

For more, we’re joined by the man responsible for the drilling ban, former Pittsburgh Councilman Doug Shields. Democracy Now! invited the Marcellus Shale Coalition to join us on the show but didn’t get a response.

AMY GOODMAN: So, what happened in the city council in 2010?

DOUG SHIELDS: Well, in 20—leading up to that, we started to have wholesale leasing within the city, and nobody knew about it, literally. There was a study by the University of Pittsburgh, where they combed through the deeds office, and, lo and behold, 642 acres are leased. A Catholic cemetery in the middle of my council district, 200 acres, was the biggest lease. Constituents came to me and said, you know, “What’s going on?” And it didn’t make any sense.

But the more we learned about it, and it started to affect other parts of the city as a body, I introduced a rights-based bill. Generally, you go to zoning and—but you’re not going to do any good in that area, so we centered it on rights. And it’s called a community rights ordinance. And the effect is, is that you can’t drill in the city of Pittsburgh. And it’s been in place since November 16, 2010. People said it could be challenged. Nobody challenged it.

AMY GOODMAN: Why were you so concerned about fracking?

DOUG SHIELDS: Well, it’s inherently dangerous. There’s no environmental impact studies on the part of the state. The state—the institutions of our government failed miserably to do any kind of due diligence, says, “OK, we’re sitting in the middle of the second-largest gas supply in the world. What’s so bad about that?” And that was about the extent of the thinking from the state, no environmental impact studies, no health risk studies. And now I’ve got sick people all over. I’ve got a Department of Health that is not funded to even look into the complaints. I have a book here, Stories from the Shale Fields, where people go on the record. I mean, these are people that are harmed, people that don’t have water, people that have livestock that died.

AMY GOODMAN: And they don’t have water because?

DOUG SHIELDS: It’s contaminated either by methane or other chemicals. Now, the industry, “Well, fracking never did anything.” You know, blah-blah. Well, what about the impoundments that spilled and ruined the pond or the blowout that you had in Clearfield?

DOUG SHIELDS: It is a method by going into a shale bed, a linear piece of geology, going down and then turning the drill horizontal and extracting from the shale, an organic material, methane gas and wet gas, propane, things like that, butane, and some oil.

AMY GOODMAN: And you do that by putting enormous water pressure.

DOUG SHIELDS: Yes, and then they go down, they explode charges, they fracture the shale.

AMY GOODMAN: How fierce was the opposition?

DOUG SHIELDS: To me? They were never to be seen. They never came to a hearing in council. We had extensive panels dedicated in the Pittsburgh City Council. And the council, after we had science, health, law people that knew what the heck they were talking about, once we understood the equation here, we said, “This is an inherently dangerous process. There is no protection to the health, welfare and safety of the city. And you’re just giving us over—you know, what are we? A colony of Harrisburg?”

DOUG SHIELDS: That’s correct. And they went so far as to pass an act, Act 13, that pre-empted all zoning ordinances and authority for just one industry: the oil and gas industry. And Pennsylvania has a use by right, under the law enacted in February, to drill anywhere—residential areas and so forth. The same is going on in Ohio. They’re drilling in a subdivision, Broadview Heights. Yeah.

AMY GOODMAN: Well we are headed to Ohio.

DOUG SHIELDS: And we have no rights.

AMY GOODMAN: And I want to thank you for this brief conversation, but we’re continuing to follow fracking around the country. There were protests across the country this week around the issue of fracking. Doug Shields, thanks so much—

AMY GOODMAN: —for being with us, former Pittsburgh councilman, introduced the ordinance banning corporations from natural gas drilling in the city.

Well, I look forward to going to Ohio, Cleveland. Today we will be at 5:00 at Visible [Voice], the bookstore, and then at 8:00 at First Church in Oberlin, Oberlin, Ohio. Then look forward to Kenyon, Gambier, Ohio, noon tomorrow at Gund Gallery. And then we’ll move on to Columbus and then to Athens at University of Ohio. On Sunday, we’ll be in Cincinnati. Check our website at democracynow.org. 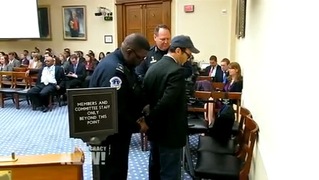