“Bainport, a Taste of the Romney Economy”: Bain Plant Workers Fight Outsourcing Their Jobs to China

“Welcome to Bainport, a taste of the Romney economy.” That’s the message on one of the banners that greets you at the tent city where we broadcast from in Freeport, Illinois. “Bainport” is an encampment set up by workers who face losing their livelihoods when their workplace closes its doors in November and moves to China, taking 170 jobs with it. The workers’ plant, Sensata Technologies, is owned by Bain Capital, the firm co-founded by Republican presidential nominee Mitt Romney. Democracy Now! first spoke to the Sensata workers when we met them at the Republican National Convention in Tampa, Florida, where they unsuccessfully tried to meet with Romney. Now, they have returned to Freeport and set up a protest camp in a bid to save their jobs. We speak to “Bainport” workers Dot Turner and Cheryl Randecker. [includes rush transcript]

AMY GOODMAN: We’ve just arrived in Freeport, Illinois, about an hour and a half to two hours from Chicago. Oh, it’s about 10:00, 10:30 at night. There’s a large white tent here and a campfire, because we’re across the street from the Sensata plant. Actually, it’s the old Honeywell plant that was bought by Sensata, which is owned by Bain Capital. And a group of workers and their supporters are camping out here until the factory closes, exporting its jobs to China. They’ve built a stage, which we see over there in the darkness, that says, “Mitt Romney: Come to Freeport.” And above, it says “Bainport.”

Can you tell me your name?

AMY GOODMAN: And what are you doing here across from the factory that you work in?

AMY GOODMAN: How long have you worked at this factory?

AMY GOODMAN: What year did you start?

AMY GOODMAN: And how old were you?

AMY GOODMAN: Forty-three years, you worked in this one factory.

AMY GOODMAN: And when did you learn that you would be losing your job?

AMY GOODMAN: What had happened then?

DOT TURNER: They called us into a room, and they told us that if you’re sitting in this room today, you are now an employee of Sensata.

DOT TURNER: Honeywell—yes, Honeywell had sold us to Sensata.

AMY GOODMAN: So where does Bain come into this?

DOT TURNER: They own Sensata.

AMY GOODMAN: So, how did you feel on that day when they told you that you would—after they told you you’re working for Sensata, when did you learn you’d be losing your job altogether?

DOT TURNER: They told us that day. They were blunt and to the point. They told us to [inaudible] don’t, you know, build on false hopes thinking that the company purchased the automotive line, that it would be staying. And they told us between 18 to 24 months they were phasing the business out, and they were sending it to China, and they brought in Chinese workers for us to train to take our jobs.

AMY GOODMAN: You trained your replacement?

DOT TURNER: Not in my particular area, but in most of the other areas that they had to train the Chinese workers.

AMY GOODMAN: How did you feel, and how did your co-workers feel who were doing that?

DOT TURNER: Angry and belittled. I mean, it was like an insult to have—take your job but then request that you train the replacements.

AMY GOODMAN: When does your job end?

AMY GOODMAN: Will you be—will you be getting any kind of severance?

DOT TURNER: I will get a six months’ severance, and I’ll be able to collect unemployment.

AMY GOODMAN: What are you going to do then?

DOT TURNER: See what—what’s available for me, what’s out there, look into some type of retraining. But at my age, who would want to go through, you know, that kind of trouble, when you’ve had a solid job for 43 years, hoping to retire the normal way?

AMY GOODMAN: I see you all have built a stage that’s inviting Mitt Romney to Freeport. Why Mitt Romney?

DOT TURNER: Because he is one of the investors and owners of Bain Capital. Even though he denies it, he still has a big part in Bain Capital, because Bain Capital is bringing the investors in millions of dollars. So why would you turn loose a company that you stand a chance of making millions?

AMY GOODMAN: What would you say to him if he did come to Freeport?

DOT TURNER: I would tell him that he has the power and the authority to stop this. If he was really concerned about the American people and if he was concerned about creating jobs, the 12 million jobs that he always uses as his stump speech, he could create this job by leaving it here.

CHERYL RANDECKER: I’m Cheryl Randecker, and I work at Sensata, and I’ve been there for 33 years.

AMY GOODMAN: So you were there when it was Honeywell, then bought by Sensata, which is owned by?

CHERYL RANDECKER: Yes, by—Sensata is owned by Bain Capital, which is, in turn, Romney’s baby.

CHERYL RANDECKER: Yes, but my camping is in my car.

AMY GOODMAN: And what’s—what’s the point? Why are you camping out here?

AMY GOODMAN: Are you afraid of repercussions?

CHERYL RANDECKER: At this point, no, because there really isn’t too much they can do. They’re already taking my job. They’re taking my livelihood. They’re taking my means of supporting my family away. So, with it getting closer, it’s almost like you really can’t do too much more to me.

AMY GOODMAN: So, here you sit in front of a campfire to stay warm.

CHERYL RANDECKER: Stay warm and just kind of look into the flames and try to reflect and find some calming and some sense out of all the chaos that goes on over there.

AMY GOODMAN: Now, you, remarkably, were sent to China by Honeywell, when the plant was owned by Honeywell.

CHERYL RANDECKER: Yeah, and I went over there and trained for the air flow of the medical devices that Honeywell transferred over there in 2010.

AMY GOODMAN: Were you concerned at the time that this flow of jobs to China would end up meaning you all were going to lose your jobs?

CHERYL RANDECKER: No, I actually thought I’d probably be safe with the automotive, because Honeywell had been trying to sell automotive for quite some time. And we did hear, when we were in China, that it was sold. But when we came back, they denied it. And then about four months later, they announced it. So, it was a surprise that it’s acted this fast. I thought it would take a little more time. But so be it, I guess. Life will go on. It’s just going to be a hard one.

AMY GOODMAN: So, you went there, and you were training workers, eventually who are taking the jobs here of the workers here. And then Chinese workers were sent here, as well?

CHERYL RANDECKER: Yeah, Sensata brought their own Chinese workers over from Baoying and Changzhou to train on the automotive lines, because where I was at in Nanjing was the air flow pressure lines from Honeywell. So, they brought their employees over here, and some were new hires and some had been there for some time. But we had to train them on the operations that are being moved over in our particular line, which are high—they’re technical machines. And they really didn’t pick up well on the machines that are being built, and not to mention the machines don’t run that great all the time. So, it’s—when you’re running so many parts over a machine, things break, and if you don’t see them and you’re not running them on a day-to-day basis, then when you run into the problem, you may not be able to fix it.

AMY GOODMAN: Cheryl Randecker worked for 33 years at the plant, Dot Turner for 43 years. They lose their jobs in a few weeks. Their website, bainport.com. And that does it for our show from Freeport, Illinois.

Our Election 2012 Silenced Majority Tour continues Thursday night at 7:00. That’s tonight in Madison, Wisconsin at the Barrymore Theatre. We’ll be speaking Friday at noon in Eau Claire at the Unitarian Universalist Congregation Church, and at the Lac Courte Oreilles Band of Lake Superior Ojibwe in Hayward, Wisconsin. 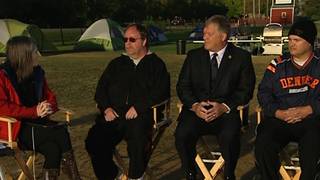