Accepting his party’s nomination, President Obama brought the Democratic National Convention to a close Thursday with a vow to fix the nation’s economic problems while protecting the environment. Calling the 2012 election a pivotal moment in the battle against climate change, Obama criticized Republicans who say global warming is a hoax, but also gave support for natural gas drilling and “clean coal.” [includes rush transcript]

AMY GOODMAN: This is Democracy Now!, democracynow.org. I’m Amy Goodman. This is “Breaking With Convention: War, Peace and the Presidency,” Democracy Now!'s daily coverage of the Democratic National Convention, inside and out. We're broadcasting from Charlotte, North Carolina.

The 2012 Democratic National Convention has come to an end. On Thursday night, President Obama accepted his party’s nomination. He vowed to fix the nation’s economic problems.

PRESIDENT BARACK OBAMA: I’ve met workers in Detroit and Toledo who feared they’d never build another American car, and today they can’t build them fast enough, because we reinvented a dying auto industry that’s back on the top of the world. I’ve worked with business leaders who are bringing jobs back to America, not because our workers make less pay, but because we make better products, because we work harder and smarter than anyone else. I signed trade agreements that are helping our companies sell more goods to millions of new customers, goods that are stamped with three proud words: “Made in America.”

PRESIDENT BARACK OBAMA: And after a decade of decline, this country created over half a million manufacturing jobs in the last two-and-a-half years.

And now you have a choice. We can give more tax breaks to corporations that ship jobs overseas, or we can start rewarding companies that open new plants and train new workers and create new jobs here in the United States of America. We can help big factories and small businesses double their exports. And if we choose this path, we can create a million new manufacturing jobs in the next four years. You can make that happen. You can choose that future.

You can choose the path where we control more of our own energy. After 30 years of inaction, we raised fuel standards so that, by the middle of the next decade, cars and trucks will go twice as far on a gallon of gas. We have doubled our use of renewable energy, and thousands of Americans have jobs today building wind turbines and long-lasting batteries. In the last year alone, we cut oil imports by one million barrels a day, more than any administration in recent history. And today, the United States of America is less dependent on foreign oil than at any time in the last two decades. So now you have a choice, between a strategy that reverses this progress or one that builds on it.

We’ve opened millions of new acres for oil and gas exploration in the last three years, and we’ll open more. But unlike my opponent, I will not let oil companies write this country’s energy plan or endanger our coastlines or collect another $4 billion in corporate welfare from our taxpayers. We’re offering a better path. We’re offering a better path, where we—a future where we keep investing in wind and solar and clean coal, where farmers and scientists harness new biofuels to power our cars and trucks, where construction workers build homes and factories that waste less energy, where—where we develop a hundred years’ supply of natural gas that’s right beneath our feet. If you choose this path, we can cut our oil imports in half by 2020 and support more than 600,000 new jobs in natural gas alone.

And, yes, my plan will continue to reduce the carbon pollution that is heating our planet, because climate change is not a hoax. More droughts and floods and wildfires are not a joke. They are a threat to our children’s future. And in this election, you can do something about it. 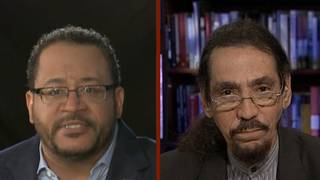