President Obama accepted the Democratic presidential nomination Thursday night with an appeal for another four years to continue with the platform of “change” he was elected on in 2008. “If you reject the notion that this nation’s promise is reserved for the few, your voice must be heard in this election,” Obama said. [includes rush transcript]

StorySep 07, 2012Ex-Mich. Gov. Jennifer Granholm: “In Romney’s World, Cars Get the Elevator, Workers Get the Shaft”

AMY GOODMAN: This is Democracy Now!, democracynow.org. I’m Amy Goodman. Well, we are “Breaking With Convention: War, Peace and the Presidency,” Democracy Now!’s special daily two hours of coverage from the Democratic National Convention, inside and out.

President Obama accepted the presidential nomination Thursday here in Charlotte, North Carolina, in his bid for re-election. Obama took to the stage after being introduced by Illinois Senator Dick Durbin, the same man who introduced him eight years ago at the DNC when Obama was a relatively unknown candidate for the U.S. Senate. During Obama’s speech, he forcefully argued he had rescued the economy from disaster and planted the seeds for a recovery, a recovery that only would be stymied by a Republican victory this November. He vowed to create a million new manufacturing jobs by 2016 and to double exports by 2014. On foreign policy, Obama mentioned the killing of Osama bin Laden, the withdrawal of combat troops from Iraq, and the planned drawdown from Afghanistan by 2014. On the environmental front, President Obama called the 2012 election a pivotal moment in the battle against climate change. He criticized Republicans who say global warming is a hoax, but also gave support for widely expanding natural gas drilling.

We begin today’s broadcast with an excerpt of President Obama’s acceptance speech.

PRESIDENT BARACK OBAMA: I refuse to ask middle-class families to give up their deductions for owning a home or raising their kids, just to pay for another millionaire’s tax cut. I refuse to ask students to pay more for college or kick children out of Head Start programs, to eliminate health insurance for millions of Americans who are poor and elderly or disabled, all so those with the most can pay less. I’m not going along with that.

And I will never—I will never turn Medicare into a voucher. No American should ever have to spend their golden years at the mercy of insurance companies. They should retire with the care and the dignity that they have earned. Yes, we will reform and strengthen Medicare for the long haul, but we’ll do it by reducing the costs of healthcare, not by asking seniors to pay thousands of dollars more. And we will keep the promise of Social Security by taking the responsible steps to strengthen it, not by turning it over to Wall Street.

This is the choice we now face. This is what the election comes down to. Over and over, we’ve been told by our opponents that bigger tax cuts and fewer regulations are the only way, that since government can’t do everything, it should do almost nothing. If you can’t afford health insurance, hope that you don’t get sick. If a company releases toxic pollution into the air your children breathe, well, that’s the price of progress. If you can’t afford to start a business or go to college, take my opponent’s advice and borrow money from your parents. You know what? That’s not who we are. That’s not what this country is about.

As Americans, we believe we are endowed by our creator with certain inalienable rights, rights that no man or government can take away. We insist on personal responsibility, and we celebrate individual initiative. We’re not entitled to success, we have to earn it. We honor the strivers, the dreamers, the risk takers, the entrepreneurs, who have always been the driving force behind our free enterprise system, the greatest engine of growth and prosperity that the world has ever known. But we also believe in something called citizenship — “citizenship,” a word at the very heart of our founding, a word at the very essence of our democracy, the idea that this country only works when we accept certain obligations to one another, and to future generations.

We believe that when a CEO pays his auto workers enough to buy the cars that they build, the whole company does better. We believe that when a family can no longer be tricked into signing a mortgage they can’t afford, that family is protected, but so is the value of other people’s homes, and so is the entire economy. We believe the little girl who’s offered an escape from poverty by a great teacher or a grant for college could become the next Steve Jobs or the scientist who cures cancer or the president of the United States, and it is in our power to give her that chance.

We know that churches and charities can often make more of a difference than a poverty program alone. We don’t want handouts for people who refuse to help themselves, and we certainly don’t want bailouts for banks that break the rules. We don’t think that government can solve all our problems, but we don’t think that the government is the source of all of our problems, any more than are welfare recipients or corporations or unions or immigrants or gays or any other group we’re told to blame for our troubles.

AMY GOODMAN: President Obama also sought to differentiate himself from his Republican rivals, Mitt Romney and Paul Ryan, by criticizing their trickle-down economic policies. As he concluded his speech, Obama roused the crowd by telling them to make their voices heard this election.

PRESIDENT BARACK OBAMA: If you reject the notion that this nation’s promise is reserved for the few, your voice must be heard in this election. If you reject the notion that our government is forever beholden to the highest bidder, you need to stand up in this election. If you believe that new plants and factories can dot our landscape, that new energy can power our future, that new schools can provide ladders of opportunity to this nation of dreamers, if you believe in a country where everyone gets a fair shot and everyone does their fair share and everyone plays by the same rules, then I need you to vote this November.

America, I never said this journey would be easy, and I won’t promise that now. Yes, our path is harder, but it leads to a better place. Yes, our road is longer, but we travel it together. We don’t turn back. We leave no one behind. We pull each other up. We draw strength from our victories, and we learn from our mistakes, but we keep our eyes fixed on that distant horizon, knowing that providence is with us and that we are surely blessed to be citizens of the greatest nation on earth. Thank you. God bless you, and God bless these United States. 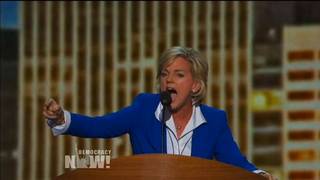