A federal judge has ruled that New York City police are not allowed to routinely stop pedestrians outside of private residential buildings in the Bronx. The stops are part of the so-called Clean Halls program, which has prompted allegations of police harassment by some residents who say they are being accosted outside of the buildings in which they live. Previous data on the New York Police Department’s “stop-and-frisk” policy has shown African-American and Latino men make up a hugely disproportionate share of those stopped. We’re joined by Molly Kovel, staff attorney with the Bronx Defenders and part of the legal team in the case, and by Abdullah Turner, a Bronx resident whose building is enrolled in the Clean Halls program and who says he was unfairly arrested while waiting for a friend inside. [includes rush transcript]

JUAN GONZÁLEZ: We turn now to a ruling in a federal court that’s dealt a major setback to the New York City police tactic known as “stop and frisk.” On Tuesday, U.S. District Judge Shira Scheindlin of the Southern District of New York ruled police are not allowed to routinely stop pedestrians outside of private residential buildings in the Bronx. The stops are part of the so-called “Clean Halls” program, which has prompted allegations of police harassment by some residents who say they’re being accosted outside of the buildings in which they live. Previous data on the New York Police Department’s stop-and-frisk policy has shown African-American and Latino men make up a hugely disproportionate share of those stopped.

These are some of the voices of Bronx residents who either joined or supported the lawsuit, in a video made by the New York Civil Liberties Union.

BRONX RESIDENT 2: You can’t even walk here. You’ve got to walk on eggshells.

BRONX RESIDENT 3: It’s not a pleasant experience to go through, and it’s embarrassing. When you have people over, they call it “Fort Knox.” And nobody wants to come and visit you, and your family doesn’t even want you to live here.

BRONX RESIDENT 2: So when we see police, we don’t like them. We don’t want to talk to you, because all we’ve seen is you abusing us.

BRONX RESIDENT 3: You have a lot of innocent bystanders and people that work and have a nine-to-five, that they feel that they’re being harassed. And it’s not fair. Nobody wants to come home and get up and go to work, when they have to go through that.

JUAN GONZÁLEZ: In related news, the Bronx district attorney’s office announced in September that it would refuse to pursue trespassing charges against people arrested at Bronx public housing projects unless the arresting officer submits to an interview. Officials found police had provided written statements indicating people were guilty of trespassing, even though they later turned out to be innocent.

AMY GOODMAN: Democracy Now! invited the New York Police Department to join us on the program; they declined, saying the case is ongoing.

For more, we’re joined by Molly Kovel. She is staff attorney with the Bronx Defenders and part of the legal team in this case. Her clients are Bronx residents who were illegally stopped by New York City police as part of Operation Clean Halls, part of the stop-and-frisk program that allows police officers to patrol in and around certain private apartment buildings.

We’re also joined on the phone by Abdullah Turner, lives in the Bronx. His building is enrolled in the NYPD’s Clean Halls program. He testified he was unfairly arrested outside a Clean Halls building while waiting for a friend who was inside.

We welcome you both to Democracy Now! Molly, let’s begin with you.

AMY GOODMAN: Talk about the significance of this federal judge ruling.

JUAN GONZÁLEZ: And in reading Judge Scheindlin’s decision, she also referred quite extensively to the Bronx district attorney’s office qualms over how the police were conducting these investigations, which is really unusual, the district attorney’s position here.

MOLLY KOVEL: It’s extremely unusual. I don’t know of another case where the district attorney’s office was testifying against the police department’s policies. The Bronx district attorney had seen far too many cases be dismissed by judges who were furious that the police officers in those cases had either lied to district attorneys about where the person had been stopped or what kind of investigation the police officers had been doing, and they were furious that people were being stopped on suspicion of trespass, merely for being outside of a building that was enrolled in this program.

MOLLY KOVEL: Yes. The program is—there’s 8,000 buildings in New York City; 3,000 of them are in the Bronx. And it’s—private landlords sign up their buildings for patrol by the NYPD. The police commissioner calls this sort of a doorman function or says that the police are providing the same level of safety as a private doorman. But that’s ridiculous. Doormen don’t carry guns, you know, in open, plain view. Doormen don’t throw you up against the wall. Doormen don’t arrest you for no reason.

AMY GOODMAN: Abdullah Turner, tell us what happened to you.

I was on my way to a party with a friend of mine. She had came to my house and woken me up to go to this party. So, we said our goodbyes to everyone in the house, and we made our way to the party. It took us some time. The party was not that far from my house, but we were talking. Once we got to the building, she stopped me and told me she had to return a sweater to someone else who lived in the building next door. So I waited for her outside. She went in the building, and I was on the phone with another friend.

So while I was talking to my friend on the phone, pacing in front of the building, the cops came up behind me. I didn’t even see them because I had my back turned to the way they approached. They got out of the car, and one of them snatched the phone out of my hair. I turned around to see who snatched my phone, and it was a police officer. So I’m like, “Yo, what’s going on?” He stopped, and he was like, “Do you live here?” I asked him—he asked me. I told him, “No, I don’t live here. I’m waiting for a friend of mine upstairs. You know, she’s returning a sweater. We’re going to a party in the next building.” He asked me some other questions. He asked me for my ID. I gave him my ID. I answered his questions. And he took my ID and my cellphone and went into the building with another one of the officers. I was outside with a third officer, who continued questioning me until my friend came out.

My friend came outside, and she asked them what’s going on. And I told him that was my friend I was waiting for. So, after that, he radioed in to the other officers, telling them, you know, that he got the friend. They came outside immediately, and the officer who snatched my phone, he started asking her questions. So she answered his questions. She gave him her ID, and they said all the stuff they had to say. They searched her for whatever she had on her. They separated us. They moved—had her against the wall, and they moved me to a car in front of the building.

There, he pointed to a sign that said Operation Clean Hall and asked me did I know what it meant. I swore to him that I didn’t. And he then told me that I’m trespassing. I said, “How could I be trespassing if I’m outside?” So, then he told me I’m going to jail. He told me to turn around, and he handcuffed me. He took me—

AMY GOODMAN: Abdullah, we have five seconds. What happened next?

ABDULLAH TURNER: Five seconds, he—we went to the precinct. Then I met the lawyer, Molly Kovel, and back and forth, I—I mean, I met my lawyer, Shayna Kessler, and then back and forth to court like eight to nine times. And—

MOLLY KOVEL: Well, it sets a real tone that says that the stop-and-frisk program is on notice for being unconstitutionally broad and violating Fourth Amendment rights systematically. There’s a lot—there’s a long way to go, but this is an incredible first step.

AMY GOODMAN: Molly Kovel and Abdullah Turner, we thank you both for being with us. We’re going to link to Juan González’s column at the New York Daily News. 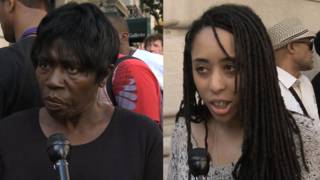