Notre Dame’s star linebacker and team leader Manti Te’o is in the media limelight after reports have emerged that his girlfriend may never have existed — a girlfriend who allegedly died of leukemia and inspired him to become a top football player in her memory. While Notre Dame has launched a probe into the hoax, sportswriter Dave Zirin criticizes the school’s slow response to an alleged sexual assault committed by a football player in 2010. The team opened a probe only after the 19-year-old victim, Lizzy Seeberg, committed suicide. “No tears for Lizzy Seeberg, no tears for other women who anonymously have said they were attacked, yet tears for Manti Te’o,” Zirin says. “It says a great deal about the culture at Notre Dame that values the brand, the lucrative brand, of Fighting Irish football above all else.” [includes rush transcript]

JUAN GONZÁLEZ: Dave, let’s turn to another big sports story in the news this week involving Manti Te’o, a star linebacker on Notre Dame’s football team. Can you lay out what we know about that weird case?

The story of the college football season was Notre Dame’s rise to prominence. The center of Notre Dame’s team was the star linebacker Manti Te’o. And the center of Manti Te’o’s story was the fact that he was playing for his grandmother and his girlfriend, who both passed away within hours of each other on September 11th or September 12th. The dates actually keep changing, which is part of the story. She died of leukemia, the story went. Manti Te’o was playing with a broken heart, but inspired by her memory. An entire nation of college football fans were swept in this story. People raised thousands of dollars in her name to give money to cancer research. And it turns out that she never existed.

And now here’s where we get to two possibilities of what took place. Either Manti Te’o was victim of a hoax that took place over the course of three years—he was a victim of what’s “catfishing,” where someone set up this identity, ensnared him online, and pushed him to actually feel like he was in love with a real person, who wasn’t real—or Manti Te’o was an architect of this hoax and did so for reasons that, frankly, are left to speculation at this point. Maybe he was trying to give himself a narrative that would aid his chances to win the Heisman Trophy. Maybe he was trying to keep his personal life extremely private and didn’t want anybody to know about his personal life, and one way to do that is to say, “Well, I have this girlfriend. You don’t know here. She’s on the—I have to talk to her on the Internet.”

But either way, what we know for sure is that Manti Te’o misled the biggest sports media outlets in the country—ESPN, Sports Illustrated. The establishment sports media has looked like absolute fools in the aftermath of this story. And the story was itself broken by Deadspin, which is an online site that’s seen as an outlaw site by the main sports media manufacturers. It’s another instance of independent Internet journalism doing the job that the big media outlets just did not do.

But like I said, this story is so bizarre. We’re learning more about it every single day. And it’s the sort of thing where—I once had an editor say to me that, “Look, when the sun sets in the West, that’s not a story. When the sun doesn’t set, that’s a story.” And this is one of those instances where it’s so different, so bizarre, that it really has captured the attention. I’ll tell you, the only people madder than Notre Dame football fans is probably Oprah Winfrey, because this has just sucked all the air out of the room in terms of what people are talking about.

AMY GOODMAN: This is Manti Te’o in an interview that took place before the sports website Deadspin revealed that his girlfriend never actually existed.

MANTI TE’O: I just lost everything. And I cried. I yelled. I never felt that way before. This is—six hours ago, I just found my grandma passed away, and you take, you know, the love of my life. Last thing she said to me was “I love you.” And that was it.

AMY GOODMAN: And, Dave, you were just saying that this involves the big sports media. Also, the teams, even opposing teams, everyone standing for—and for people who haven’t followed the story, to understand, did he ever say he met this girlfriend that he was in love with, that his father said would be his future daughter-in-law, that they apparently said they met after a Stanford University game?

DAVE ZIRIN: Yes. In many interviews, he’s very cagey about it. And when you read them now, you can see he’s not actually talking about them being together physically in the same room. But in some interviews, he talks about their eyes meeting across the football field, their hands touching. On the football field after a game, he thanked her family specifically. Once again, there is no family, but he thanked her family for the way they were there for him in the aftermath of her death.

I mean, there are only one of two ways to look at this. And let me be clear about this, too. Manti Te’o was an Academic All-American. This isn’t a case of somebody who’s dumb as a box of shamrocks, if you will, and unable to see what is happening here. So you’re really left with only one or two alternatives. Either Manti Te’o is so sweet, so trusting, so loving, that he would nurse someone he had never actually been in the same room with through her leukemia, through her death, while proclaiming his undying love, without ever actually meeting her—and if this is the case, he should be isolated and studied in a lab for the good of humanity—or, he was an architect of a hoax that ensnared the biggest forces in sports media, and ensnared his school, Notre Dame.

And this is where the story actually, I think, gets very important for a Democracy Now! audience, because Notre Dame, they have stood behind Manti Te’o through this whole thing. They said they hired private investigators to find out the truth about what happened, and they believe him 100 percent that he was victim of a hoax. The athletic director, a man named Jack Swarbrick, he cried in front of the media, because he said Manti Te’o, the most trusting person in the world, may never trust again. I mean, my goodness. But the same school did not hire investigators when a scandal broke out about allegations of sexual assault and rape connected to the football team. The school did not hire private investigators or shed one tear for Lizzy Seeberg, a student at neighboring St. Mary’s College, a freshman at St. Mary’s College, who had allegations of sexual assault against the team. She was sent threatening messages from people connected to the team over her cellphone. And, by the way, that’s not an allegation; those messages have been seen and documented. And then she took her own life. No tears for Lizzy Seeberg, no tears for other women who anonymously have said they were attacked, yet tears for Manti Te’o. It says a great deal about the culture at Notre Dame that values the brand, the lucrative brand, of Fighting Irish football above all else.

JUAN GONZÁLEZ: Well, and Dave, in connection to that, your book, Game Over: How Politics Has Turned the Sports World Upside Down, really begins to go into this enormous problem with so many of the different sports in America and how politics keeps intruding into the games. Could you—could you summarize the main theme that you’ve been trying throughout the essays in this book?

DAVE ZIRIN: Absolutely. And there is a whole chapter about college football and the corruption of college football, which, by the way, says so much about our campus culture in this country, just by looking at college football. It says something that at so many of our state universities the college coach is the highest-paid employee, not just on campus, but in the state. And meanwhile, of course, tuitions are going up, majors are being cut, students are being pushed out.

I mean, I believe sports—and this is the whole point of the book—I believe sports is like a weather vane. And you don’t look at a weather vane to determine the weather; you look at a weather vane to determine which way the wind is blowing. And if you look at sports over the last couple years, it has mirrored the crisis that’s taking place globally, both in terms of economics, both in terms of issues that have to do with everything from the Arab Spring to the recessions here at home, to the Occupy movement, in ways that are really quite profound. And I wrote the book out of a frustration, because I felt like so much of the sports media, even some of my favorite writers, were writing about this in strands, like maybe there would be a story about the role of the Egyptian soccer fan clubs in the Egyptian revolution, or maybe there would be a story about the Miami Heat basketball team and the way that they proclaim their solidarity with Trayvon Martin and his family after he was murdered by George Zimmerman, or perhaps there would be something about LGBT or trans athletes and how they were finally emerging from the closet and proclaiming their place on the playing field. But there was no way to try to actually look at this as a totality and say, wow, if you look at sports right now, just at the sports page, you could see that our society, right now in 2013, is profoundly different than it was just five years ago.

AMY GOODMAN: We’re going to talk about your book when you come up to New York in the next few weeks, Dave, when it actually officially comes out. Dave Zirin, sports columnist for The Nation, host of Edge of Sports Radio on Sirius/XM, author of a number of books—his latest, coming out later this month, Game Over: How Politics Has Turned the Sports World Upside Down. Stay with us. 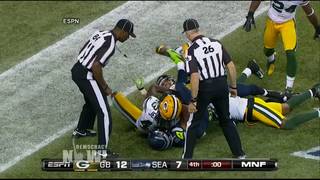