Civil rights leader Benjamin Chavis joins us at President Obama’s inauguration just weeks after winning a pardon of innocence by North Carolina Gov. Bev Perdue, along with the other members of the Wilmington Ten. The group of mostly African-American activists were falsely convicted and imprisoned for the firebombing of a white-owned North Carolina store in the 1970s. Their pardons followed a campaign to vindicate unequivocally the Wilmington Ten after their convictions were overturned by a federal court decades ago. Newly surfaced documents revealed the prosecutor in the case made racially biased notes next to potential jurors, writing comments like ”KKK good” and “Uncle Tom type.” Chavis, a former assistant to Rev. Dr. Martin Luther King Jr. and former executive director of the NAACP, discusses what it feels like to be attending President Obama’s inauguration on Dr. Martin Luther King Jr. Day after finally receiving a pardon. [includes rush transcript]

StoryNov 10, 2020“We Are Committing Mass Suicide”: Laurie Garrett on Danger of Overturning ACA During Pandemic

AMY GOODMAN: While here in Washington, D.C., just before heading to the Peace Ball, I ran into Reverend Ben Chavis, member of the Wilmington Ten, former assistant to Dr. Martin Luther King Jr., former executive director of the NAACP. When we last spoke to Ben Chavis on Democracy Now!, it was in December, when he and others for making a last-ditch push for the North Carolina governor, Bev Perdue, to pardon him and nine other civil rights activists known as the Wilmington Ten.

It was 1971. The city of Wilmington was in the midst of a civil rights struggle. After a white-owned grocery store in a black neighborhood was firebombed, police officers and firefighters arrived to extinguish the flames but came under gunfire. An African-American teen was killed by police that night. A white man was shot and killed the next day. The National Guard moved in. Nine black men and one white woman were rounded up, hustled off to jail for their alleged involvement. The young defendants, the majority just high school age, were collectively sentenced to a total of more than 280 years in prison. Reverend Ben Chavis served more than five years in prison.

I asked Reverend Chavis last night what it felt like to be attending President Obama’s inauguration on Dr. Martin Luther King Day, after finally being pardoned.

REV. BENJAMIN CHAVIS: This is a 40-year case of injustice. Forty years. But, you know, better late than never. And I just want to thank the movement. This would not have been possible without millions of people weighing in. And I thank the governor for her act of courage of issuing a pardon of innocence for the Wilmington Ten. We’re here now to celebrate the second inauguration of President Barack Obama, also an occasion of the celebration of Martin Luther King Jr.’s birthday. This all comes together. We feel so happy to be finally vindicated. But this also means now we must reaffirm our support for the continuation of the movement for freedom, justice and equality for all people, not only in America, but throughout the world.

AMY GOODMAN: In this exoneration that the governor issued, what was—what most affected you in what she said?

REV. BENJAMIN CHAVIS: Well, what most affected us was a quote in her own words that the case of the Wilmington Ten was, quote, “a case of naked racism,” unquote. For a Southern governor, a Democratic governor, a female governor, to make that statement on her last day of office shows how powerful the movement for freedom can be, when even elected officials in a Southern state can say we must right the wrongs of the past by acting in the present and in the future.

AMY GOODMAN: Have you spoken with the other survivors?

REV. BENJAMIN CHAVIS: Oh, yes. We were all together. We were—had a big celebration. And when I finally got the piece of paper with the governor’s signature on the seal of the state of North Carolina, I said, “This paper feels very heavy.” It’s 40 years of weight in it.

AMY GOODMAN: How long did you serve in prison?

AMY GOODMAN: How will you get those years back?

REV. BENJAMIN CHAVIS: Well, you can’t get those years back, but I’m going use what time I spent in prison just to rededicate ourselves. Once you take years away from a person’s life, it’s hard to restore, but we’re going to use this as a badge of honor, a badge of pride, and to encourage young people to learn from the civil rights movement, so we don’t have to go back and repeat history, but we can transform history going forward.

AMY GOODMAN: Why do you say this was a movement victory as opposed to a governor just changing—

REV. BENJAMIN CHAVIS: Well, the governor responded to the movement of the people. This was a movement victory. You have to keep in mind, we went to prison because of the movement, and the movement also set us free. That’s the issue.

AMY GOODMAN: Reverend Ben Chavis was a member of the Wilmington Ten, and he was former assistant to Dr. Martin Luther King Jr. and former executive director of the NAACP. We were speaking just before I headed off to the—cover the Peace Ball here in Washington, D.C. He was headed off to a hip-hop ball. 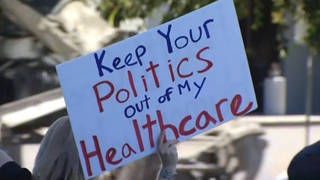 “We Are Committing Mass Suicide”: Laurie Garrett on Danger of Overturning ACA During Pandemic