The poet and activist Sonia Sanchez reads from her poem, “Morning Song and Evening Walk for Martin Luther King.” Sanchez, a leading figure in the Black Arts movement, performed at the Peace Ball in Washington, D.C., honoring voices of hope and resistance. [includes rush transcript]

AMY GOODMAN: Next, at the Peace Ball: Voices of Hope and Resistance, we turn to poet and activist Sonia Sanchez reading a poem honoring Dr. King called “Morning Song and Evening Walk for Martin Luther King.”

Tonite in need of you
and God
I move imperfect
through this ancient city.

Quiet. No one hears
No one feels the tears
of multitudes.

The silence thickens
I have lost the shore
of your kind seasons
who will hear my voice
nasal against distinguished
actors.

O I am tired
of voices without sound
I will rest on this ground
full of mass hymns.

You have been here since I can remember Martin
from Selma to Montgomery from Watts to Chicago
from Nobel Peace Prize to Memphis, Tennessee.
Unmoved among the angles and corners
of aristocratic confusion.

It was a time to be born
forced forward a time
to wander inside drums
the good times with eyes like stars
and soldiers without medals or weapons
but honor, yes.

All summerlong it has rained
and the water rises in our throats
and all that we sing is rumored
forgotten.
Whom shall we call when this song comes of age?

In our city of lost alphabets
where only our eyes strengthen the children
you spoke like Peter like John
you fisherman of tongues
untangling our wings
you inaugurated iron for our masks
exiled no one with your touch
and we felt the thunder in your hands.

And you said we must keep going and we became
small miracles, pushed the wind down, entered
the slow bloodstream of America
surrounded streets and “reconcentradas,” tuned
our legs against Olympic politicians elaborate cadavers
growing fat underneath western hats.
And we scraped the rust from old laws
went floor by floor window by window
and clean faces rose from the dust
became new brides and bridegrooms among change
men and women coming for their inheritance.
And you challenged us to catch up with our
own breaths to breathe in Latinos Asians Native Americans Transgenders
Whites Blacks Gays Lesbians Muslims and Jews, Chicanos, to gather
up our rainbow-colored skins in love and peace and racial justice
as we try to answer your long-ago question: Is there
a nonviolent peacemaking army that can shut down
the Pentagon?

And you challenged us to breathe Bernard Haring’s words:
the materialistic growth—mania for
more and more productions and more
and more markets for selling unnecessary
and even damaging products is a
sin against the generations to come
what shall we leave to them:
rubbish, atomic weapons numerous
enough to make the earth
uninhabitable, a poisoned
atmosphere, polluted water?

The earth has tilted dear Martin
As we awaken each morning to an eternal alarm clock called hope
I count the morning stars
the air so sweet anointing the day
Hope comes on morning sails
and we fold ourselves in the middle of morning
as we turn away from a landscape of greed
We carry the sun on our backs and remember you Martin
remember the thirst of your eyes, your hands confessing peace
peace and racial justice.

And as we try to answer that question
we inaugurate across the sound of your words
not symbols and serums
not peepholes and posturing
not legions and luxury
With this new president, dear Martin
we hope
We hope that we are inaugurating a new day
a time for all Americans
we inaugurate like new men and women should
coming out of themselves towards peace and justice and freedom.

So come
So come with yourselves
singing life life life
singing eyes, singing hands
alarming the death singers that we have come to celebrate life
until we become seeing men and women again
Come come come come come
inaugurate a new way of breathing for the world
a new way of peace and justice for the world
Come and we’ll get better in three words:
Ebayee ebayeeeeee ebay
ebayeeeee ebayeeeee
yeee yeeee yeee ye ye ye.
It’ll get better.

AMY GOODMAN: Poet Sonia Sanchez reading from her poem, “Morning Song and Evening Walk for Martin Luther King.” She read that poem last night at the Peace Ball, honoring voices of hope and resistance. This is Democracy Now!, democracynow.org, The War and Peace Report. We’ll be back in a minute. 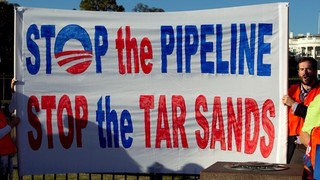 “The Fight Is Never Over”: Van Jones on Keystone XL Pipeline, Green Jobs and MLK’s Legacy