This year’s Sundance Film Festival includes 28 feature-length documentaries from the United States and around the world, covering subjects including the story of WikiLeaks, abortion, the Egyptian revolution, immigration, covert U.S. wars, and many more. All five of the films nominated for the 2013 Academy Award for best documentary have premiered at Sundance: “5 Broken Cameras,” “The Gatekeepers,” “How to Survive a Plague,” “The Invisible War” and “Searching for Sugar Man.” We’re joined by Cara Mertes, director of the Sundance Institute Documentary Film Program and the Sundance Documentary Fund. “We’re supporting a global, independent documentary movement,” Mertes says. [includes rush transcript]

AMY GOODMAN: We conclude today’s broadcast by looking at the Documentary Film Program here at Sundance Film Festival. Observers have long noted documentaries are the strongest component of the festival, with the L.A. Times writing last week, quote, “As always with Sundance, the documentaries are the most reliable choice festivalgoers can make.” All five of the films nominated for the 2013 Academy Awards for best documentary have played here at Sundance. The films are 5 Broken Cameras, The Gatekeepers, How to Survive a Plague, The Invisible War and Searching for Sugar Man.

This year, the festival includes 28 feature-length documentaries from the U.S. and around the world. They feature a wide range of subjects, including the story of WikiLeaks, abortion, the Egyptian revolution—we’ll be bringing you that story, The Square, tomorrow, on the second anniversary of the Egyptian revolution—immigration, covert wars, many more.

CARA MERTES: Thanks so much for being here.

AMY GOODMAN: It’s great to have you with us. So, it has—we’re moving in on the 11th year of your program. What is this program?

CARA MERTES: This program is the year-round support mechanism that the institute has. So Bob Redford really had a vision to create a platform for documentaries and independent feature films, started, you know, in 1984.

AMY GOODMAN: So, just to be clear, for people who don’t know, who are watching or listening around the world, is that the Sundance Film Festival was founded by Robert Redford.

CARA MERTES: Absolutely. And he always had the notion that he wanted to support artists first. And so, the labs and the year-round support actually started before the festival. And we had feature film in here very early on, and the documentary program really came here in 2002. So we’ve had a fund. We’ve had labs. We’ve had creative support. We network, you know, our filmmakers. We often find additional financing for them. And we also work internationally year-round to support documentary wherever we can. We’re in China. We’re in India. We’re in the Middle East. We’re really supporting a global, independent documentary movement.

AMY GOODMAN: And how do people access this? How do they learn about this?

CARA MERTES: Well, that, you can of course go to the website. And we have calls year-round.

CARA MERTES: The website is Sundance.org. And people can apply to our fund, the Documentary Fund, and that’s how you become a grantee. And then we invite you to various labs that we have year-round or workshops, work-in-progress screenings. We have a whole slate of awards and other support mechanisms that we use to bring the films’ quality to the level that the artists themselves really want.

And we form communities of documentary filmmakers. So, for instance, this year we have 12 films that went through our documentary program that were selected by the Sundance festival programmers. There’s no guarantee, if you get into the program that I run, that you will actually be in the festival. So those films have to compete against the other 2,000 entries that are viewed and get chosen. And this year, out of the 40 documentaries that were programmed, 12 of them came through the documentary program. So we’re thrilled with that.

AMY GOODMAN: Well, let’s talk about one of them, the one we started with when we flew in on Monday night from Washington, D.C., with our five-hour special covering the inauguration. You go to democracynow.org to see that. We flew to Salt Lake City, raced to the library for a 9:00 showing of Dirty Wars: The World is a Battlefield. It premiered at Sundance in the U.S. Documentary Competition section. The film was directed and edited by Richard Rowley of Big Noise Films, and Jeremy Scahill, the narrator and subject of the film, also co-producer, who co-wrote the script. Of course, Jeremy was a producer at Democracy Now!, a correspondent, also national security correspondent at The Nation. And the film follows Jeremy to Afghanistan, Somalia and Yemen, as he chases down the hidden truth behind America’s expanding covert wars.

JEREMY SCAHILL: Aden—Yemen’s ancient port city was nothing like Kabul. In Afghanistan, life was defined by the war. Everything revolved around it. But in Yemen, there was no war, at least not officially. The strikes seem to have come out of the blue, and most Yemenis were going about life as usual. It was difficult to know where to start. The Yemeni government claimed responsibility for the strikes, saying they had killed dozens of al-Qaeda operatives. But it was unclear who the targets really were or who was even responsible.

AMY GOODMAN: An excerpt of the film Dirty Wars: The World is a Battlefield. You were hearing the narrator, the investigative journalist Jeremy Scahill, who co-wrote this documentary with Dave Riker. Cara Mertes, use this as an example of how a film incubates and how remarkable this film is. I mean, here, this week, we—there have been as many drone strikes in as many days—what, five—on Inauguration Day itself, U.S. drone attacks, and this is what Jeremy takes on, this and JSOC.

CARA MERTES: So, Anthony Arnove and Brenda Coughlin, who are the producers of this, took this film to me very, very early on and said, “We want to do this.” Of course, so many of us know Jeremy’s work; he’s a phenomenal reporter. And as soon as I understood the scope of what they were trying to do, we do what we often do: We were some of the first money in. We funded them very, very early on to go and find the story and understand how Jeremy himself would become a character in his own story. And they would recreate, in a way, the journey over the course of the 75 minutes that you watch this film—it’s really a journey of a lifetime that Jeremy has gone through—and sort of create a portrait that is so human around an international issue that people just don’t understand. And so, that 75 minutes, people walk out of that theater absolutely transformed. In fact, I’ve never seen a film screened at Sundance where people are so stunned that nobody claps when the first credit comes up, and at the end, they just leave. It’s astounding, the effect that that film has had. And, of course, now it’s sold, and we’re going to be seeing it on screens around the country.

CARA MERTES: That’s correct. And there’s going to be screenings. The book is going to be released, and the film will be seen around the country in theaters. So, it’s very, very exciting.

CARA MERTES: There are 12 films, as I said. And, in fact, you just had After Tiller and Gideon’s Army on, and they’re really amazing films. And I guess, out of the films that are here this year, one of the themes that I see is this attempt to construct a portrait of humanity, a sort of 360-degree portrait of the lives of the people that are being treated, the subjects of these films, so that we can begin to understand, from all points of view, what these characters are going through. So, Jeremy does this. Robert Reich is in Inequality for All. And he and Jeremy both realize that film now is an incredible messenger for them. It’s a very, very concise way to deliver, you know, sort of profound messages about the realities of our world. After Tiller, following the doctors and nurses—after the cameras leave, what happens? How do these people live their lives? How do they stand up for their convictions? So, over and over and over again, we see these portraits in the films here this year.

AMY GOODMAN: And a study was just done, talking about their effect on films and documentaries.

CARA MERTES: Absolutely, absolutely. And we see two distinct paths. There’s a women’s initiative now going on at Sundance Institute, which wants to call out the paths that women have, both in feature film and in documentary. And, of course, in documentary, if you spend any time here, you understand that documentary is full of women directors and women storytellers. In the feature film world, it’s a bit different, and that’s the real challenge, I think, that we see.

AMY GOODMAN: I want to thank you, Cara Mertes, for joining us, director of the Sundance Institute Documentary Film Program and the Sundance Documentary Fund. Tomorrow, we will look at The Square, a documentary that’s premiered here about the Egyptian revolution, on—well, tomorrow will be the second anniversary of the Egyptian revolution. You can go to our website for all of our coverage of Sundance. That’s democracynow.org. 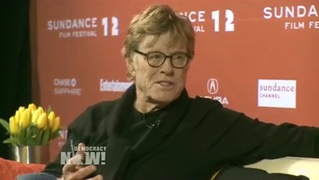