In a boon for military contractors, the United States is relaxing controls on military exports, allowing some U.S.-made military parts to flow to nearly any country in the world with little oversight. ProPublica reports that beginning this week, thousands of parts for military aircraft can be sent freely around the world, even to some countries currently under U.N. arms embargoes. Previously, military firms had to register with the State Department and obtain a license for each export deal. That allowed U.S. officials to screen for issues including possible human rights violations. But now, tens of thousands of items are shifting to the Commerce Department, where they fall under looser controls. The changes were heavily lobbied for by military firms including Lockheed Martin, Textron and Honeywell. “The whole globe, basically, is going to get an easier deal in terms of getting access to U.S. military technology without very many questions asked,” says William Hartung, director of the Arms and Security Project at the Center for International Policy. The United States already heavily dominates arms exports market: In 2011, the U.S. concluded $66 billion in arms sales agreements — which accounts for nearly 80 percent of the global market.

AMY GOODMAN: In a boon for military contractors, the United States is relaxing controls on military exports, allowing some U.S.-made military parts to flow to nearly any country in the world with little oversight. ProPublica reports, beginning this week, thousands of parts for military aircraft can be sent freely around the world, even to some countries currently under U.N. arms embargoes. Previously, military firms had to register with the State Department and obtain a license for each export deal. That allowed U.S. officials to screen for issues including possible human rights violations. But now, tens of thousands of items are shifting to the Commerce Department, where they fall under looser controls. The changes were heavily lobbied for by military firms including Lockheed Martin, Textron and Honeywell. The U.S. already heavily dominates arms exports market: In 2011, the U.S. concluded $66 billion in arms sales agreements, which accounts for nearly 80 percent of the global market.

To talk more about this, we’re joined by Bill Hartung, director of the Arms and Security Project at the Center for International Policy.

Bill, we thank you very much for being with us. You’ve just completed a report on the Obama administration’s loosening of controls over U.S. arms exports. Your latest book, Prophets—that’s P-R-O-P-H-E-T-S— Prophets of War: Lockheed Martin and the Making of the Military-Industrial Complex. Talk about what this Obama administration relaxing of the sending of weapons and parts means.

WILLIAM HARTUNG: Sure. I think the amazing thing, which you mentioned, is that the United States already dominates the trade. It’s not clear they can make a lot more money here, but they’re trying. And one of the things that will happen is, if you’re a smuggler and you want to do a circuitous path through a third-party country, those countries are now getting license-free spare parts, surveillance equipment and so forth, that can then go on to a human rights abuser, to a terrorist group. And detecting this is going to be much more difficult without the State Department licensing process.

AMY GOODMAN: How did this happen?

WILLIAM HARTUNG: Well, the industry has been pushing for this for two decades, and they have a couple points of leverage. Of course, they have campaign contributions. They’ve got people on the advisory committees that help develop these regulations. They’ve done studies making bogus claims about the economic impacts. And the Obama administration, more than even the Bush administration, bought into industry’s arguments—argued, “Well, we’re going to streamline this. It’s going to make things more efficient. We’re going to get the economic benefits.” And I think they took a great risk in taking those industry suggestions, not looking hard enough at the human rights proliferation and anti-terrorist implications of that. So, I they they may have had good intentions, but I think they tilted way too far towards the industry.

AMY GOODMAN: Several trade groups have been calling for this easing of restrictions on arms exports. Lauren Airey of the National Association of Manufacturers said in an interview with ProPublica that foreign competitors are, quote, “taking advantage of perceived and real issues in U.S. export controls to promote foreign parts and components—advertising themselves as State-Department-free.” Can you comment on that?

WILLIAM HARTUNG: Sure. This is an anecdote that comes up frequently, but there’s never been any documentation of how common this is. The Commerce Department was asked in a congressional hearing, “What’s the economic downside of the current system or the upside of your reforms?” He said, “We haven’t looked at that.” So they really haven’t looked at the economic effects. In fact, if it’s easier to export production technology to build U.S. parts overseas, this reform could actually make it worse for U.S. jobs, even as it helps the big companies, like Lockheed Martin, outsource their components globally.

AMY GOODMAN: So, talk about, Bill Hartung, the countries that can get these weapons and these parts.

WILLIAM HARTUNG: Well, the first round is NATO allies, but includes countries like Bulgaria, countries like Turkey, which have had bad records of keeping those parts within their countries, keeping them from being transhipped to, you know, destinations that the U.S. would not want to see them in, places like Democratic Republic of the Congo, Indonesia during its most repressive periods. Basically, almost anywhere in the world, it’s now going to be much easier to do this kind of roundabout sale. But also, many parts are going to be license-free altogether, so they can go almost anywhere in the world, other than perhaps Venezuela, Iran, China, in certain circumstances. So, the whole globe basically is going to get an easier deal in terms of getting access to U.S. military technology, without very many questions asked.

AMY GOODMAN: Can you explain, as even the Obama administration is pushing for more gun control at home, how this happens now?

WILLIAM HARTUNG: Well, I think, you know, they promised this to industry. They see it as a big achievement that they’ve undertaken since Obama’s first term. They have taken a look at the firearms issue. They’re going slow on rolling out those regulations, because they know it’s a very sensitive item. People, like the gun lobby, want no new restrictions, and in fact to roll back restrictions on gun exports. So I think there may still be room for leverage here over the administration, because they have been kind of shy about putting forward what they’re going to do about guns, ammunition, small arms or light weapons, which are among the biggest problems in terms of getting into conflict zones. So, I think there might still be some hope there to turn them around, but, you know, it will take some pressure, which so far we haven’t seen a great deal of pressure from the Congress on this.

AMY GOODMAN: Countries like Bahrain, that’s cracking down on its own people protesting human rights abuses there?

WILLIAM HARTUNG: Exactly. Bahrain will probably have an easier time getting U.S. weapons. Saudi Arabia has just gotten a $60 billion deal, the biggest in history, for attack helicopters, fighter planes, guns and ammunition, armored vehicles. And they’ve been helping Bahrain put down the democracy movement there, also obviously repressing their own people. So, not only are the sales at record levels, but they’re going to some of the most undemocratic countries in the world at a time when they’re supposed to be—our policy should be to support democracy in the Persian Gulf and Middle East, not, you know, help the oppressors, as some of these sales will do.

WILLIAM HARTUNG: Well, I think, for starters, there should be a moratorium on any new changes in these regulations. You know, let them see what the first round—what the impacts are, which I think they’re going to see are going to be quite negative. Second of all, for things that have gone over to the Commerce Department, are not—unvetted by State, there should be new laws to say, well, Commerce has to use the same criteria as State, in terms of vetting for human rights. I think also they should look at what the economic impacts are really going to be. Instead of making these claims about how it’s going to be wonderful for U.S. jobs, really dig in and see how many jobs are going to be exported as a result of letting this technology flow more freely. I think if we can get him to do those three things, we could probably blunt the most negative consequences of these so-called reforms.

AMY GOODMAN: What’s the type of military equipment, including U.S. arms, most commonly used in human rights violations around the world?

WILLIAM HARTUNG: Well, you know, there’s things like tear gas. U.S. tear-gas canisters showed up in Egypt, for example. There’s things like, you know, automatic weapons. There’s armored personnel carriers. In some of the conflicts, obviously, against internal adversaries, attack helicopters are used.

AMY GOODMAN: —just to get this last question in. You just wrote a piece saying, “After the Shutdown, Don’t Exempt the Pentagon.” We’ve got 15 seconds.

WILLIAM HARTUNG: Well, I think the Pentagon is going to try to wriggle out of this, when they’ve been—had their budget doubled since 9/11. It’s time to put them on a diet, put them under discipline. And I think their allies in Congress are going to try to do an end run around that, which I think would cost us tremendously on the domestic side of the budget.

AMY GOODMAN: So the State Department, soon its employees will be furloughed, and I’m sure a number of them are right now, but the Pentagon has pulled back and called back most of its employees.

WILLIAM HARTUNG: Exactly. They’re already kind of on the verge of getting special treatment. We have to make sure they don’t jack up their budget, which in recent years has been at the highest levels since World War II.

AMY GOODMAN: Bill Hartung, I want to thank you for being with us at the Center for International Policy. We will link to your report.

That does it for our show. I’ll be speaking at the Green Festival in Los Angeles at 1933 Broadway at LA Mart, Saturday at 2:00. 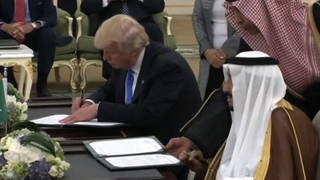