More than 10,000 people are feared dead in the central Philippines following one of the most powerful storms ever recorded. Nearly 1,000 people are confirmed dead so far, but the toll is expected to rise. Typhoon Haiyan sent huge waves that inundated towns, washed ships ashore and swept away coastal villages. More than 600,000 people have been displaced, and many still have no access to food, water or medicine. The city of Tacloban was described as a scene of massive devastation, with bodies scattered in the streets and buried under flattened buildings. We are joined by Al Jazeera correspondent Jamela Alindogan, who reported from Tacloban after Typhoon Haiyan struck, herself struggling to survive the storm.

AMY GOODMAN: More than 10,000 people are feared dead in the central Philippines following one of the most powerful storms ever recorded. It’s believed to be the most powerful typhoon to ever make landfall in human history. Nine hundred forty-two people are confirmed dead so far. The head of the Red Cross in the Philippines has described the devastation caused by Typhoon Haiyan as, quote, “absolute bedlam.” Most of the damage and deaths were caused by huge waves that inundated towns, washed ships ashore and swept away coastal villages. The United Nations said officials in Tacloban, which bore the brunt of the storm, had reported one mass grave of 300 to 500 bodies. More than 600,000 people were displaced by the storm, and many still have no access to food, to water or medicine.

This is Philippines Interior Secretary Mar Roxas speaking the day after the devastating typhoon hit.

MAR ROXAS: The devastation is—it’s—I don’t have the words for it. It’s really horrific. It’s a great human tragedy. There’s no power. There’s no light. By the time sun set—the sun sets, it’s dark, and, you know, you’re just going to have to make your way to—to where you can find some shelter.

AMY GOODMAN: The Category 5 storm hit the Philippines with winds as strong as 195 miles per hour. The storm comes less than a year after Storm Bopha killed 1,067 people and left 834 missing.

For more, we go to the Philippines. We’re joined by Jamela Alindogan, a reporter for Al Jazeera in the Philippines. She reported live from Tacloban after Typhoon Haiyan struck. She almost didn’t make it out. She’s joining us now from the capital of the Philippines, from Manila.

Welcome to Democracy Now! Can you describe—just take us through what happened when the typhoon hit, Jamela.

JAMELA ALINDOGAN: Well, we were sent there the day before. I came in with our—my cameraman from the Philippines, and we stayed at a hotel, which is in Palo, Leyte, by the coastline. We landed at about Thursday 8:00 p.m. local time. And we were with other journalists who were already suggesting that they think it’s best that we vacate that area because it’s not really the best—the safest area to be in. But we’ve had—I’ve had the—we booked a driver and a car, but, you know, because of the danger, this driver in fact canceled on us, so it took me until 3:00 a.m. to find a vehicle for us to take us around. By that time, I said, “Let’s just stick around here.”

At 5:00—at 4:45 a.m., in fact, we felt that—that was when officially the typhoon in fact made landfall. I managed to get a few phone interviews with Al Jazeera English, Al Jazeera America, and we were setting up for a live at around 6:30 a.m. local time. About a minute into our live, all of a sudden the typhoon struck, and there’s just this incredible wind, basically. These trees, they were blowing like they were weightless, they were paper. And roofs were being blown away, just like that. The visibility was in fact only a meter. We were close to the coastline, but I couldn’t see the waves coming. And all of a sudden, in just a matter of 30 minutes, the water surged up as high all the way up to the second floor. And we were stuck.

And all of a sudden, all the other guests started going up to the area where we were; they were also looking for—for a safer area. This hotel is only up to the second level. And so, we—one of the guys, another journalist, a local journalist, started kicking the door behind us, which is a stock room, and we—he kicked the door open, and we managed to get in, but it turned out to be a place full of shelves with towels and water supplies and all these things, and there was a roof over there. And so we climbed up to the ceiling and held onto the beams of the ceiling, and we held onto it for about an hour.

And all of a sudden we felt that, you know, the wind was actually starting to—the roofs and the ceiling was actually starting to give way. And in just a matter of 20 minutes, it started caving in, and this really, really scary sound. And all of a sudden the entire roof is gone, and we were exposed to this beast, this incredible power that is really unimaginable. The sound is absolutely terrifying. It is horrific. I mean, it’s beyond what anybody else could imagine. I have covered armed conflict, but there is nothing like this, nothing as incredible and as scary as covering a natural disaster like Typhoon Haiyan.

When we were exposed to that, we managed to hide in one of the shelves. We took shelter there. Debris were flying over on top of us, above us. We knew that the eye of the storm was just above us. And we were ready to climb, in fact, and we were holding onto empty gallons of this water, plastic bottles, these massive gallons of water containers, hoping that this could actually keep us afloat in the event that we have to jump. And we waited for two hours, and, thankfully, the water didn’t rise up to the level where we were planning to jump on, basically. And we waited another two hours. It was really, really, really dragging, really long, really difficult to not know exactly how—you know, how things are going to—how your life will turn out. And thankfully, we—the water went down. But the winds were way too powerful, so we stayed a couple of hours more.

And a few hotel attendants managed to rescue us one by one from that tiny room, and we were moved to a safer place. From then on, we realized that everything, all of our gear, everything that we had, is gone. Everything has been—

AMY GOODMAN: Jamela? We’re on by Democracy Now! video stream, so we will try to relink up with her. Jamela Alindogan is a reporter for Al Jazeera. Are you there, Jamela? Jamela, are you there? We’re going to go to break, and then we’ll come back to continue to hear this discussion. And then we’re going to talk to Jeff Masters of the Weather Underground to talk about how typhoons relate to climate change. This is Democracy Now!, democracynow.org, The War and Peace Report. We’re talking about perhaps the most powerful typhoon in the history of the planet to make landfall. We’ll be back in a minute.

AMY GOODMAN: “Masdan Mo Ang Kapaligiran,” by Asin. The song means “Observe the Environment.” This is Democracy Now!, democracynow.org, The War and Peace Report. I’m Amy Goodman. We are joining Jamela Alindogan in the Philippines, in the capital, Manila, reporter for Al Jazeera. She reported live from Tacloban after Typhoon Haiyan struck. The typhoon in the Philippines is known as Yolanda. She’s joining us from Manila, describing what happened after—so, you lost your equipment. The roof pulled off of the building you were in. You got to safety. Jamela, what happened next?

JAMELA ALINDOGAN: Well, we just made our way out of that area, basically, because there was nothing left. I mean, that place has become a ghost town in just a matter of three hours. And walking out of there took us about three hours to get to the next town. And it was just devastation everywhere. There was looting already. And it was hard to imagine how—you know, the damage. I mean, it’s something that you see in the movies, you see, but you can’t quite—it’s very overwhelming to see it in reality. You don’t think that it was possible. And within just a short span of time, to see that an entire province—actually, a very historical area of central Philippines has been destroyed just like that.

And we went around with the governor of Leyte and went to a hospital, which is working under really awful conditions, with no electricity, no clean water, and people—doctors who have been working over 24 hours on injured that are being brought in, and people just basically dying in the dark with no—not enough medicine. So, I mean, these are just one of the examples—one of the few establishments, in fact, that were operating still even after the typhoon.

“If Not Now, Then When?”: As Climate Talks Open in Poland, Philippines Devastated by Another Storm

NEXT“If Not Now, Then When?”: As Climate Talks Open in Poland, Philippines Devastated by Another Storm 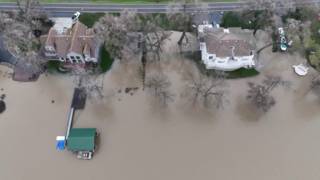