Filipina Climate Chief: “It Feels Like We Are Negotiating on Who Is To Live and Who Is To Die”

As aid workers in the Philippines continue to dig mass graves amidst the search for possible survivors after Typhoon Haiyan, the executive director of the Philippines Climate Change Commission, Mary Ann Lucille Sering, gave a moving address today to her fellow climate change delegates at the U.N. climate summit in Warsaw, Poland. “Every time we attend this conference, I’m beginning to feel that we are negotiating on who is to live and who is to die,” Sering says.

AMY GOODMAN: This is Democracy Now!, democracynow.org, The War and Peace Report. I’m Amy Goodman. We’re the only global TV-radio broadcast that is spending the hour every day of this week here at the U.N. climate change summit in Warsaw, Poland. I’m Amy Goodman.

Just before our broadcast today, the executive director of the Philippines Climate Change Commission gave a moving address to fellow climate change delegates. This is Mary Ann Lucille Sering.

MARY ANN LUCILLE SERING: The timing of Typhoon Haiyan to these climate talks is impeccable. It is like some divine hand is trying to send us a message, reminding us why we are all here in the first place.

The world was united when we all signed this convention 21 years ago and when it came into force two years after. The main objective is to stabilize greenhouse gas concentrations in the atmosphere at a level that would prevent dangerous anthropogenic or human interference with the climate system.

Nineteen years has passed since the convention came into force. And if we are to review our progress, would it be right for me to conclude that we’ve failed miserably? Looking at science and how it manifested itself not only in Typhoon Haiyan, but also other events like Katrina in the United States, the heat wave in France, the wildfires in Australia, and other extreme events occurring after observed increased warming, should we not be all ashamed being here?

You cannot blame us for being impatient. We cannot go on negotiating every year without concrete action to avoid further warming. We now know that warming oceans fuel supertyphoons, and that, in all probability, is going to be the norm. We are forced to brace for these changes, even if it is not our fault. You see, if the developed countries have shown the leadership to reduce greenhouse gases at the onset of this convention, we, the most vulnerable, would not have to adapt. We would not have to ask or push for adaptation support.

I now ask this question: Is this convention still relevant to the times? Every time we attend this conference, I’m beginning to feel like we are negotiating on who is to live and who is to die.

I have reasons to be angry, because we put our faith on this process 21 years ago, and yet we still could not get together to act despite the sense of urgency. We all signed, because at the end of the day we are citizens of the only planet we have. We continually engage in this process because we all acknowledge that this requires a global response. We want to be part of a concerted effort, believing that we agreed would—what we agreed would be respected and implemented; that the suffering of one is a concern to others; that we are, most of all, guided not only because it is moral to do so, but it is our obligation to do so.

I heard repeated calls for increased ambition even from developed countries. But we are disheartened by declarations of several developed countries that they cannot meet their commitments. Shifting mitigation responsibilities to developing countries will not solve the problem. You are busy finding ways to review us, when you can’t even review yourself.

There comes a time when we need to see more ambition based on equity, to show more enhanced action due to its urgency. We may not be rich, but we are a proud people. When we commit, we deliver. We have been ready to contribute on the ground rules of equity, common but different shared responsibility, as espoused under this convention. We all signed up to that. We must keep stressing that we are looking for constant progress and increases in ambition on all fronts—mitigation, adaptation, finance, technology—as these will create the conditions for a successful conclusion, rather than regression, in some cases, and very weak ambition, in others. 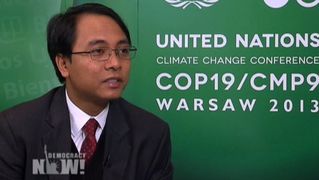