Egypt’s top public prosecutor has announced charges against ousted President Mohamed Morsi for conspiring with foreign groups to commit terrorist acts and destabilize the country. The charges carry the death penalty. Morsi was charged along with 35 others, including the Muslim Brotherhood’s top three leaders. This marks the latest escalation in the suppression of a movement that propelled Morsi to victory in last year’s presidential election only to be driven back underground after the army ousted him in July following mass protests. We are joined from Cairo by Sharif Abdel Kouddous, independent journalist, Democracy Now! correspondent, and a fellow at The Nation Institute. His latest article is “Repression Deepens in Egypt: At first it was the Muslim Brotherhood. Now dozens of journalists, non-Islamist activists and students have been detained and beaten.”

Web ExclusiveOct 21, 2021“You Have Not Yet Been Defeated”: Alaa Abd El-Fattah Continues to Push for Change from Egyptian Jail

JUAN GONZÁLEZ: We turn now to Egypt. On Wednesday, the country’s top public prosecutor announced he will charge ousted President Mohamed Morsi with conspiring with foreign groups to commit terrorist acts and destabilize the country. The charges carry the death penalty. Morsi was charged along with 35 others, including the Muslim Brotherhood’s top three leaders. All of this comes amidst a crackdown on activists under a draconian new protest law that severely restricts the right to demonstrate.

Well, for more, we go to Egypt, where we’re joined by Sharif Abdel Kouddous, independent journalist and Democracy Now! correspondent based in Cairo and a fellow at The Nation Institute. His latest piece is “Repression Deepens in Egypt: At First It was the Muslim Brotherhood. Now Dozens of Journalists, Non-Islamist Activists and Students Have Been Detained and Beaten.”

JUAN GONZÁLEZ: Your reaction to this latest—this latest announcement from the Egyptian coup government?

SHARIF ABDEL KOUDDOUS: Well, Morsi and members of the Muslim Brotherhood, senior members, have been facing charges of inciting violence. But these new charges, which, as you mentioned, carry the death penalty, are the most sweeping and heaviest accusations against the Brotherhood yet. They accuse Morsi and the Muslim Brotherhood of being involved in this vast terrorist plot stretching back to 2005, that they conspired with groups like Hamas, Hezbollah, Iran’s Revolutionary Guard, to carry out a wave of attacks to destabilize the country. Human rights groups, including ones that were critical of Morsi and the Brotherhood during their brief time in power, have called these allegations “preposterous” and “fantastical.”

The military-backed government, since Morsi’s ouster, has constantly been trying to portray the Muslim Brotherhood as a terrorist organization, either through these legal processes or through the media, and this seems to be a culmination of that. And many people are also questioning the timing of these new charges, coming just before a key referendum on the new constitution that’s set to take place in mid-January and will be a key vote in establishing this new military-backed transition.

AMY GOODMAN: Sharif, can you also talk about others who are being detained? Among them, Alaa Abd El-Fattah and Ahmed Maher, we’ve had on Democracy Now! Explain the significance of their detentions and how long they’ve been held.

SHARIF ABDEL KOUDDOUS: Right. We saw a massive crackdown over the summer of Morsi supporters, thousands of them being imprisoned. But over the last month or so, we’ve seen a crackdown really shift towards the activists that really launched and have sustained the revolution, most notably, perhaps, Alaa Abd El-Fattah, who was jailed under Mubarak, jailed under the Supreme Council of Armed Forces that replaced Mubarak, had an arrest warrant issued against him against Morsi, and now has been jailed for organizing—authorities accuse him of organizing a protest in defiance of this very draconian protest law. He said that he would—publicly stated that he would turn himself in. Despite that, police forces, 20 heavily armed men, came to his house. When his wife asked to see an arrest warrant, they beat her. They beat Alaa as they dragged him to an undisclosed location, where he spent the night blindfolded and handcuffed on the floor. And he faces charges, along with 24 others, of organizing this protest in front of the Shura Council.

It’s important to note, as well, that this protest was organized by the activist group, the No to Military Trials campaign, and they publicly stated that they organized this protest, but prosecutors have refused to charge that group, probably because most of them are made up of very high-profile female activists, and the public reaction to jailing those people would be much more severe.

Ahmed Maher is one of the founders of the April 6 Youth Movement, a key group in the revolution. Him and another very prominent activist, Ahmed Douma, are facing charges of organizing a protest outside a courthouse, and they’re due to be sentenced on Sunday. And so, we’re seeing this—the Interior Ministry really flexing its muscles and trying to crack down on all different types of dissent in the country.

JUAN GONZÁLEZ: And, Sharif, we have just about a minute, but could you talk about what’s been the role of the Obama administration? As this military government continues to get increasingly more repressive on the Egyptian population, what is the U.S. government doing or saying publicly?

SHARIF ABDEL KOUDDOUS: Well, the U.S. government has largely kept the same policies that it has for decades, which is to prioritize its relationship with Egypt with national security objectives in mind rather than any notion of rule of law or human rights. And so, while we saw the Obama administration make a small cut in the military aid that they fund to Egypt, they decided not to make a determination on whether the overthrow of Morsi was a coup or not, which would automatically trigger a cutoff of the aid. The Senate Foreign Relations Committee just yesterday passed a bill that would allow the United States to resume the full funding to Egypt and would allow for the Obama administration to waive or to overrule any determination of a coup for up to a year. So it seems like they’re wanting to go back to the full kind of relationship. We’ll have to see whether that bill passes when it goes to Congress.

AMY GOODMAN: And this just in: An Egyptian court has acquitted the two sons of former President Hosni Mubarak and his last prime minister, Ahmed Shafik, on charges of embezzlement. The significance of this, Sharif?

AMY GOODMAN: Sharif, thanks so much for your report, and you can see his reports at democracynow.org. Sharif Abdel Kouddous, independent journalist, Democracy Now! correspondent, fellow at The Nation Institute. Check out his piece, “Repression Deepens in Egypt.”

“You Have Not Yet Been Defeated”: Alaa Abd El-Fattah Continues to Push for Change from Egyptian Jail 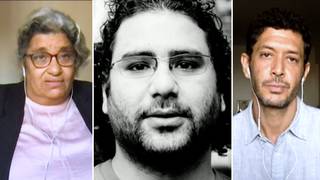 “You Have Not Yet Been Defeated”: Alaa Abd El-Fattah Continues to Push for Change from Egyptian Jail