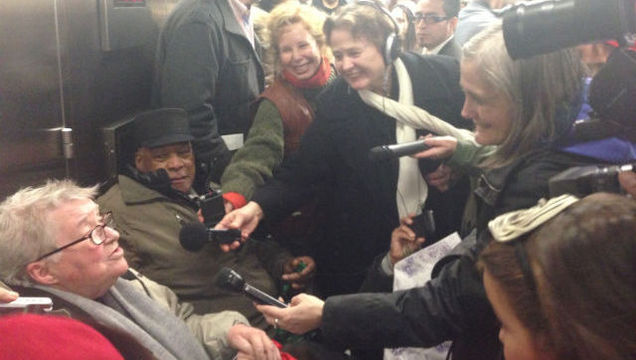 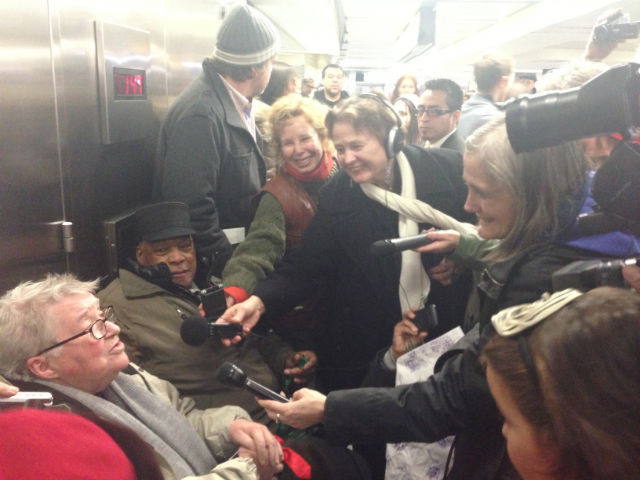 Amy Goodman interviews Lynne Stewart as she is greeted by her supporters upon her arrival at the airport in New York City. Husband Ralph Poynter looks on. (Photo: Renée Feltz)

Lynne Stewart has arrived in New York. She was released from prison Tuesday after federal Judge John Koeltl ordered her “compassionate release.” Watch Thursday’s Democracy Now! for our interview with Stewart, her husband and grandchildren, and her attorney.

Koeltl wrote that “Stewart’s “terminal medical condition and very limited life expectancy constitute extraordinary and compelling reasons that warrant the requested reduction [of her sentence.]… It is further ordered that the defendant shall be released from the custody of the Federal Bureau of Prisons as soon as her medical condition permits, the release plan is implemented and travel arrangements can be made.”

The Bureau of Prisons has submitted a request to the judge in Lynne Stewart’s case, asking him to grant “compassionate release” to 74-year-old jailed civil rights attorney who is dying from stage IV breast cancer. Scroll down to read the order.

“This morning, the government, meaning the United States Attorney’s Office for the Southern District of New York, on behalf of the Bureau of Prisons, filed a motion before Federal Judge John Koeltl, requesting that Lynne Stewart be re-sentenced to time served,” said Bob Boyle, one of Stewart’s lawyers. “This means she would be eligible — if he signs the order — for immediate release. There is every indication that will sign the order, since he said so on the record, when we made the motion back in July to have her be released.”

Boyle says he fully expects Stewart to be released in the next few days, and return to New York City where she will live with her son. He says she and her family have been told the news and are extremely relieved and grateful.

Below you can listen to Boyle’s interview about today’s developments with Democracy Now! producer Renée Feltz. Scroll down to read the transcript.

Click here to see all of our coverage of Lynne Stewart. You can also watch our recent show that looked at the many other elderly political prisoners seeking release, including Oscar Lopez Rivera and Leonard Peltier.

Stewart has served almost four years of a 10-year prison sentence for distributing press releases on behalf of her jailed client, Omar Abdel Rahman, an Egyptian cleric known as the “blind Sheikh.” In August, Judge Koeltl rejected a request that would have allowed her to die surrounded by her loved ones, saying he could not order her release unless it was first requested by the Bureau of Prisons, which had turned down Stewart’s bid for release, saying she is not sick enough. Since then, her doctor has said she has less than 18 months to live.

Transcript of interview with Bob Boyle:

RENÉE FELTZ: Tell me exactly what you’ve heard today, what you’ve confirmed, what you know about what the government has done in terms of granting Lynne compassionate release.

BOB BOYLE: This morning, the government, meaning the United States Attorney’s Office for the Southern District of New York, on behalf of the Bureau of Prisons, filed a motion before Federal Judge John Koeltl requesting that Lynne Stewart be re-sentenced to time served, which means that she would be eligible, if he signs the order, for immediate release. There is every indication that he will sign the order, since he said so on the record when we made the motion back in July to have her be released on compassionate release. So we’re fully expecting, within the next day or so, that he will sign the order, which would enable the Bureau of Prisons to release her, as we say in the legal community, forthwith, or immediately. Yes.

RENÉE FELTZ: Can you kind of revisit what the judge actually said on this topic?

BOB BOYLE: Well, what he said in his initial decision back in the end of August, I believe, was that the court lacks the power under the law to order compassionate release. And that was his—that was the legal basis for his decision. But while he said that, he said, “Should the Bureau of Prisons deem that she qualifies for compassionate release and makes a motion to me, which is what the law says has to happen—the Bureau of Prisons has to bring the motion—I would sign it.” That’s what he said in his decision back in August. So that’s why I can say with a good deal of confidence that, you know, he should sign this order.

RENÉE FELTZ: And what was the Southern District of New York’s—what was the U.S. Attorney Office’s position previously, and how has it changed on this?

BOB BOYLE: They had opposed our—Lynne’s motion for compassionate release, arguing essentially that the court had no power to overrule the Bureau of Prisons. That was their legal position. And they did—after she filed her new request for compassionate release, it went through the channels, and under new regulation, they weighed in on their opinion. And, you know, at this point, I mean, we’re extremely gratified that they saw fit—you know, that they did in fact apply the guidelines and filed the motion for her release.

RENÉE FELTZ: And what exactly will happen once you hear from Judge Koeltl? What will be the process for Lynne to be taken out of prison? And will she come back to New York? And what’s going to happen?

BOB BOYLE: Well, all of those logistics are being worked out. I can’t be any more specific about that. That’s being worked out as we speak. And the release plan that was approved by the Department of Probation—Lynne will be under supervised release for the next five years—was that she will live with her family. Particularly, she’ll be—I believe she’ll be living with her son Geoffrey, and that’s the most comfortable place for her to be, given her physical condition. And that’s been—that is the release plan.

RENÉE FELTZ: And have you had a chance to speak with Lynne? And what’s her reaction then, if so?

BOB BOYLE: My co-counsel, Jill Shellow, did earlier this morning. And Lynne’s reaction is that she’s overjoyed that she’s going to be able to see—you know, hopefully see the new year in, if not one day after the new year in, with, you know, the family that she loves. And she’s just, you know, extremely grateful to everyone. 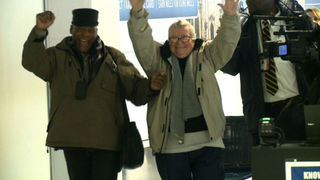