Mumia Abu-Jamal: “The United States Is Fast Becoming One of the Biggest Open-Air Prisons on Earth”

In a rare live interview, Mumia Abu-Jamal calls into Democracy Now! as the new film, “Long Distance Revolutionary,” about his life premieres in New York City this weekend. After 29 years on death row, he is now being held in general population at the Pennsylvania State Correctional Institution – Mahanoy. “How free are we today, those who claim to be non-prisoners? Your computers are being read by others in government. Your letters, your phone calls are being intercepted,” says Mumia Abu-Jamal. “We live now in a national security state, where the United States is fast becoming one of the biggest open-air prisons on earth. We can speak about freedom, and the United States has a long and distinguished history of talking about freedom, but have we exampled freedom? And I think the answer should be very clear: We have not.” In 1982, Mumia was sentenced to die for killing Philadelphia police officer Daniel Faulkner. He has always maintained his innocence and is perhaps America’s most famous political prisoner. In 2011, an appeals court upheld his conviction, but also vacated his death sentence. It found jurors were given confusing instructions. [includes rush transcript]

AMY GOODMAN: Juan, we’d like to ask you to stay on the phone as we move from the death of Mayor Koch to a new documentary, which you also are in. That documentary is premiering in theaters today. It’s called Long Distance Revolutionary: A Journey with Mumia Abu-Jamal.

In 1982, Mumia Abu-Jamal was sentenced to die for killing Philadelphia police officer Daniel Faulkner. He has always maintained his innocence, is perhaps America’s most famous prisoner. In 2011, an appeals court upheld his conviction, but also vacated his death sentence. It found jurors were given confusing instructions. When prosecutors said they would no longer pursue the death penalty, Mumia Abu-Jamal was transferred into the general prison population.

In a moment, we’re going to play an excerpt from the film, but first we’re joined by Mumia Abu-Jamal himself from prison in Pennsylvania, not SCI Greene, where he was on death row, but in—well, Mumia, welcome to Democracy Now! Why don’t you tell us where you are?

MUMIA ABU-JAMAL: Good morning. I’m in the eastern side of Pennsylvania for the first time in a quarter of a century—actually, more. It’s called Mahanoy—don’t ask me what it means; I have no idea. But it’s not far from Philadelphia and pretty close to New York City.

AMY GOODMAN: Can you tell us what it means to no longer be on death row?

MUMIA ABU-JAMAL: Well, I could, but I’d be lying, because I call this “slow death row.” “Life” in Pennsylvania means life. Pennsylvania has one of the largest “life” populations of any state in the United States. It had the distinction of having the absolute highest number of juvenile lifers of any state in the United States—indeed, of any jurisdiction in the world. So, that should give you some sense.

AMY GOODMAN: Juan, if you’re still there, if you’d like to ask Mumia Abu-Jamal a question?

JUAN GONZÁLEZ: Well, Mumia, I know that over the years—it’s been a while since we’ve talked, but over the years this enormous movement has developed around the world demanding your freedom and your—and insisting on the unjust nature of the trial that occurred many years ago in your case. Your reflections on this enormous movement that has developed and its role in terms of the prison-industrial complex, in general, and your case, in particular?

MUMIA ABU-JAMAL: Well, I think it is the essence of a grassroots movement, because it came from the bottom, not from the top. These were people who—many of whom I knew in freedom and who would not let me go and would not leave me alone and held on to me despite every challenge. At the core, of course, are people that I fell in love with many years ago, known as the MOVE Organization. And so, from several members of the MOVE Organization—Pam Africa, Ramona Africa—they built around them a grassroots organization that is in many ways unprecedented in organizing.

You know, I’ve studied movements. I’ve been in movements all my life. I’ve, you know, written a few history books about the stuff. But to be in the core of it and see it is another thing, and it’s nothing less than remarkable. And it continues to grow, to build, and to demand an end to mass incarceration, an end to what I’ve called “slow death row,” an end to solitary confinement, you know. It’s a vibrant movement. Like every movement, it ebbs, it flows. But to be perfectly honest, it’s still with us, and anyone who denies that either is blind or a fool.

AMY GOODMAN: Mumia, are you still appealing your case?

MUMIA ABU-JAMAL: Yes. I have always appealed. I have always fought. And there’s no reason to not do so now. In this point in time, we are kind of in an interim, because we had kind of a shadow sentencing with no presence, no arguments, no briefs, no anything. You know, we kind of got an order one day saying, you know, “You’re a lifer.” That isn’t what the rules provide. And so, there’s been certainly resistance on that score. But, you know, anyone who knows anything about the case, anyone who’s read the Amnesty International report on the case, knows that my case is rife with new rules, all the time. So, this is just new rules.

AMY GOODMAN: Last week, Mumia Abu-Jamal, did you witness the inauguration, the second inauguration of President Obama? And I’m wondering your thoughts.

MUMIA ABU-JAMAL: I did, indeed. It was with a mixture of sadness, in some respects, sadness at lost opportunities, but also a kind of wonder. I mean, you have to admit that Barack Hussein Obama is one of the most talented politicians and skillful political forces this country has ever seen. Now, it is also true that that is so largely because of certain constituencies in this country that pushed that candidacy; sadness because many of the hopes of many of those constituencies have been dashed. That’s the nature of politics in many ways: You run one way, and you rule another. And someone—I think it was Mario Cuomo—said that you—you run in poetry, but you govern in prose.

AMY GOODMAN: Mumia, as you are off of death row, or as you call it, “slow death row,” what is it like to be there with other people? We wanted to speak to you yesterday on the phone, but you had an appointment at the law library which you didn’t want to miss. Talk about your life behind bars.

MUMIA ABU-JAMAL: Well, let me talk about the men that are around me. It may not surprise you that a lot of these guys are black men. A lot of them are very old black men. I remember, and still feel, the shock of seeing a line of men in wheelchair being rolled to chow. I stopped, because you saw these wheelchairs coming out of the mist; I’ve never seen—I’ve never seen anything like that. But from this great expansive age. You can see very, very young men, men who don’t even shave. So, you can see the span of black manhood from teenagers—literally, teenagers—to men in their sixties and seventies and beyond. And it is a stunning thing to see. And the size. You know, there must be 2,200 men in this population, but the size is just stunning. And to be walking around in the midst of 400, 500 men is an experience, you know, that I had to relearn, because I had surely forgotten it.

AMY GOODMAN: You’re writing a book, yet another book, in prison? You’ve written a number of them.

MUMIA ABU-JAMAL: Yes, yes. This is my second with a co-author, Steve Vittoria, the great filmmaker.

AMY GOODMAN: Who is joining us right here in the studio right now.

OPERATOR: This call is from the State Correctional Institution at Mahanoy and is subject to monitoring and recording.

MUMIA ABU-JAMAL: But I assure you, we will present something richer than many people have ever seen before. It is a labor of historical lust, and great fun.

AMY GOODMAN: What are you calling the book?

AMY GOODMAN: Why that title?

MUMIA ABU-JAMAL: Well, it comes from LBJ, Lyndon Baines Johnson, who, upon the assassination of John F. Kennedy, when he acceded to the presidency and he began getting reports about what was happening in Central America, he was famously quoted as saying “My god! We’re running a goddamn Murder Incorporated down here.” And indeed they were.

AMY GOODMAN: Mumia, I know that your line is going to be cut off in a minute, and I was wondering what message do you have to people outside the bars right now?

MUMIA ABU-JAMAL: Well, increasingly, that space has expanded, because if you look inside the bars, you’re looking at millions of men and women and juveniles, as I noted before. But even beyond that, I mean, how free are we today, those who claim to be non-prisoners? Your computers are being read by others in government. Your letters, your phone calls are being intercepted. We live now in a national security state, where the United States is fast becoming one of the biggest open-air prisons on earth. I mean, we can speak about freedom, and the United States has a long and distinguished—

OPERATOR: You have 60 seconds remaining.

MUMIA ABU-JAMAL: —long and distinguished history of talking about freedom, but have we exampled freedom? And I think the answer should be very clear: We have not. And we’re becoming a less free nation every day. And I think people should rise up, and I think they should organize. And I think, frankly, they should raise hell. You know, if you don’t want to join our movement, join some movement, but damn it, do something, because we are in an age that we may never be able to capture again.

OPERATOR: You have 30 seconds remaining.

AMY GOODMAN: Mumia, if the widow of Daniel Faulkner, the prisoner—the police officer who you were convicted of killing, is listening, what do you have to say to her?

MUMIA ABU-JAMAL: That the struggle for justice and freedom did not end on December 9th, 1981; it began then. And she should join us, because our movement is growing.

AMY GOODMAN: Mumia, I want to thank you for being with us. Mumia Abu-Jamal, just cut off at SCI Mahanoy in Pennsylvania, the prison where he now resides. He was on death row in Pennsylvania for 29 years, now is in prison for life, award-winning journalist, chronicles the human condition. When we come back, we’re joined by two people who have made a film about his life, Long Distance Revolutionary. Stay with us. 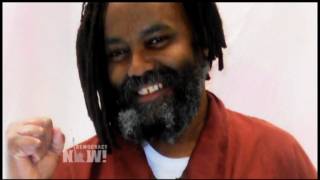