The new documentary, “Long Distance Revolutionary: A Journey with Mumia Abu-Jamal,” chronicles Abu-Jamal’s life and work as a journalist, writer and public intellectual, even as he spent some 30 years on death row in Pennsylvania. In 1982, Abu-Jamal was sentenced to die for allegedly killing Philadelphia police officer Daniel Faulkner. He has always maintained his innocence. Then, last year, the 3rd U.S. Circuit Court of Appeals set aside Abu-Jamal’s death sentence after finding jurors were given confusing instructions that encouraged them to choose death rather than a life sentence. In January, prosecutors announced they would no longer pursue the death penalty against Abu-Jamal, and the imprisoned journalist was transferred to the general prison population. We air a clip from the film, out in February, and speak with director Stephen Vittoria. [includes rush transcript]

StoryApr 25, 2012Exclusive: Mumia Abu-Jamal Speaks from Prison on Life After Death Row and His Quest for Freedom

AMY GOODMAN: I wanted to switch gears now and ask you about the new documentary that you have just worked on called Long Distance Revolutionary: A Journey with Mumia Abu-Jamal. The film chronicles Mumia Abu-Jamal’s life and work as a journalist, writer, public intellectual, even as he spent some 30 years on death row in Pennsylvania.

In 1982, Abu-Jamal was sentenced to die for killing Philadelphia police officer Daniel Faulkner, always maintaining his innocence. Then, last year, the 3rd U.S. Circuit Court of Appeals set aside Abu-Jamal’s death sentence after finding jurors were given confusing instructions that encouraged them to choose death rather than a life sentence. In January, prosecutors announced they would no longer pursue the death penalty against Abu-Jamal, and the imprisoned journalist was transferred to the general prison population.

Well, in this clip from the film, Long Distance Revolutionary, we hear from some of the voices who have supported Mumia Abu-Jamal over the years. We hear from Rubin Carter, from Cornel West, Tariq Ali, Mike Africa, Greg Ruggiero, Linn Washington, James Cone, Ramona Africa and Dick Gregory.

RUBIN ”HURRICANE” CARTER: Mumia Abu-Jamal is one of the lost souls of the revolution.

CORNEL WEST: Mumia, how are you dealing with all of this darkness and despair and despondency and so forth? He said, “Let me write about it. I’ll tell the truth about it. It’s a living hell. It’s a nightmare.”

TARIQ ALI: They have moved heaven and earth to stop his voice being heard in the United States.

MIKE AFRICA: Anybody who has the ability to draw a crowd with their voice and then speak truth? Oh, my god.

GREG RUGGIERO: Mumia Abu-Jamal is a revolutionary person. So, he’s like a guerrilla in the jungle in a tent in the rain, writing to the community with next to nothing.

LINN WASHINGTON: So here we have somebody who defiantly says, “Yes, I’m not only a journalist, but I’m a revolutionary journalist. And, no, I don’t agree with anything that you’re doing. And, yes, I have an international platform—interestingly enough, a platform that I never use to talk about my own case.” They want him ground up.

RAMONA AFRICA: When you’re pushing the lie, the truth is very threatening.

DICK GREGORY: He come through at a time that the technology was there, that could go around the world. And one day we will find out that he was the voice of America. The Voice of America is a fraud.

AMY GOODMAN: That’s a clip from the new documentary, Long Distance Revolutionary: A Journey with Mumia Abu-Jamal, written, produced and directed by Steve Vittoria, coming to theaters in February. Democracy Now!’s Juan González and me, as well, also speak in the film. Juan will be introducing the film in November in New York City at DOC NYC.

The significance of what we have just heard and why you chose Mumia Abu-Jamal as your next subject for a film?

STEPHEN VITTORIA: Amy, unlike any other film, book, video, article written about Mumia, Long Distance Revolutionary does not deal with his case whatsoever. We mention it; it is not a focus of the film. The focus of the film is Mumia’s life as a journalist, a writer, a historian, a revolutionary, both prior to incarceration and after incarceration, 30 years on death row. Now he’s been in the general population for the last year or so. And that’s what really interested me about Mumia. We know about the case. There has been plenty of pieces produced about the case. I didn’t want to mine that information again. The forces that have been—that have been keeping Mumia where he is and put him where he is, they’ve had their narrative for 30 years. There is another narrative.

And the other narrative is that this was an incredible young man at 14, 15 years old that was a writer for the Black Panther newspaper. He was a reporter and a broadcaster for National Public Radio in his late twenties. He had an amazing career before December 9, 1981, when he was arrested and then later convicted for the murder of Faulkner. It’s just an incredible story that they have kept under wraps, and they want to keep it under wraps because he has—he has transcended prison for the 30 years after. And people like Noelle Hanrahan, who is my partner on this film, she’s been able to get his voice out from death row, a dark, dank hole on death row in Pennsylvania, and she’s delivered it to the world. And he has had an amazing impact on social and political discourse the world over. That’s what the film is about.

And the voices that you just heard, the outpouring of not only love but of intellectual respect and historical respect for Mumia Abu-Jamal, is absolutely incredible. And we capture it in this film. We talk a great deal about the ugly reality of mass incarceration in this country. Michelle Alexander is in the film, the author of The New Jim Crow, and she helps to frame how and why men and women like Mumia are where they are. And so, the film covers that arc of Mumia’s life. And we’re incredibly proud—Eddie Vedder from Pearl Jam offered us some music, which is just absolutely incredible. And we have a stellar interview cast. So, we’re looking for to sharing what, quite frankly, is a brand new story with audiences all across the world.

AMY GOODMAN: Steve Vittoria, I want to thank you for being with us. Long Distance Revolutionary: A Journey with Mumia Abu-Jamal is the film. It’s premiering at the Mill Valley Film Festival and coming to theaters in February. His 2005 documentary is called One Bright Shining Moment: The Forgotten Summer of George McGovern.

This is Democracy Now! When we come back, we’ll continue on the issue of solitary confinement. We’re going to be joined by freed American hiker Shane Bauer here at the Marin Community Media Center. Stay with us. 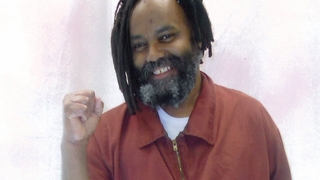 Exclusive: Mumia Abu-Jamal Speaks from Prison on Life After Death Row and His Quest for Freedom